Gagne one of many feel-good stories in Philly

12/16/08
11:12
AM ET
The New York Rangers have a fast-approaching object in their rearview mirror. It's orange and has a gap in its teeth.

The Philadelphia Flyers are four points back of the Atlantic Division-leading Rangers with four games in hand, a red-hot stretch of 12-1-3 in their last 16 games rocketing them up the Eastern Conference standings.

"We started to play our best hockey of the season about a month ago," Flyers star winger Simon Gagne told ESPN.com last night. 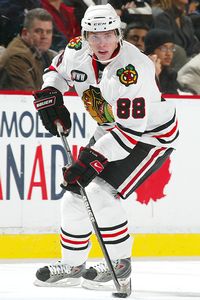 Claus Andersen/Getty ImagesPatrick Kane is noticeably stronger this season and hopes that helps with puck control.

Gagne has been clutch on a line with Mike Richards and Mike Knuble. Jeff Carter is also pumping in goals on another line with Scott Hartnell and Joffrey Lupul.

And they're doing all this without Daniel Briere in the lineup. Scary. But GM Paul Holmgren said it's not about the offense.

"More than anything, I think it's been our overall attention to team defense," Holmgren told ESPN.com. "When the other team has the puck and they're coming through the neutral zone, we're pressuring them from the back and our defensemen are allowed to stand up.

"Overall, collectively, it's been a defensive effort by our team, and obviously our goaltending has been better than it was earlier in the year."

The season started about as badly as possible. Fresh off a trip to the Eastern Conference finals, the Flyers went 0-3-3 to open the 2008-09 campaign.

"We obviously didn't like the start that we had," Gagne said. "We had a little meeting with the guys and a lot of great things happened in that meeting. From that point on, we started to play a lot better."

The players-only meeting in October was an honest discussion.

"We just said we needed to work. We weren't working hard enough to win hockey games," Gagne said. "We were looking for easy wins. From that point on, we promised each other to work harder. The next game after that, we lost in overtime to San Jose, but we played well, and after that, we started to win games. That was probably a turning point in our season."

There are many good stories on this team -- Carter the goal-scoring machine, Richards the MVP-like leader, Martin Biron the bounce-back goaltender. But is there really a better one than Gagne? Limited to only 25 games last season because of serious concussion problems, the 28-year-old native of Ste Foy, Quebec, is tied for the team lead with 34 points (15-19). Talk about a comeback season.

"I feel pretty good. I'm pretty happy with the way things are going right now," Gagne said. "I cannot ask for more. Coming back from that tough injury last year, I think there were a lot of doubts from a lot of people. But I had to prove to myself and to those people that I could be the same player.

"I have to say, I'm pretty happy with the way things are going right now through the first almost 30 games. Hopefully things will keep getting better."