Hey, how are ya, casual hockey fan?

I understand this is the time of year when some of you start paying attention to the NHL. That's cool. One can't watch every sport, listen to every CD, see every movie and get immersed in every television show. We work, sleep, play, and then fill in the remaining gaps from there.

So, some of you wait until the best tournament in the world, the Stanley Cup playoffs, to pay attention to pucks. Personally, I think you are missing out on a great sports culture to watch and learn from, but we don't push away any visitors. Just bring a six-pack, any cheese-based food product, and get ready for two months of Bill Clement, Keith Jones, Brian Engblom, Ray Ferraro and Brett Hull.

The playoffs begin next week. So, for those of you who need a refresher course on what has happened this NHL season, here are some notes from while you were away.

• This season's story has unquestionably been what is happening in Pittsburgh. Last season, the Penguins had the fewest points in the Eastern Conference and the second fewest in the NHL. They had no arena and the future seemed bleak considering Kansas City was enticing Pittsburgh with a mortgage-free home and revenue streams from the next Hinder concert. Sidney Crosby, at 19, will win the scoring title, what we in the NHL call the Art Ross Trophy. We in the NHL like to give our trophies very confusing names named after people born in 1886. The kids today love that! Crosby is better at what he does than LeBron James is at what he does. That is not hyperbole, that is fact. I'm a better free-throw shooter than LeBron. That should not be the case.

ESPN The Magazine has put Ron Artest on the cover of its magazine this year and not Crosby. Sports Illustrated has put Chad Johnson -- CHAD JOHNSON! -- on its cover, but can't seem to find time to chronicle the best story in sports from the past 12 months. You have to wonder if people who cover sports really like sports anymore.

Crosby will also likely win league MVP. The Penguins went from the worst team in the East to a 100-point team. Crosby is not the only reason for the team's success, but everything in Pittsburgh starts in his fire-filled belly of competitiveness. The '70s Bruins started with Orr's never-before-seen comet. The Flyers' title teams of the 1970s began with Bob Clarke's will. The '80s Oilers started with Gretzky's joy and relentless passion. The Avalanche were Patrick Roy's maniacal will to win. The Red Wings began with Steve Yzerman's eyes. The Penguins' core is Crosby's core.

Evgeni Malkin, 20, will win the Calder Trophy as rookie of the year. He has huge game and plays big minutes for the Penguins. This college-aged Russian is more exciting than any college basketball player you've seen this year. He plays faster than Kevin Durant and his slap shot is more powerful than any Greg Oden dunk. Malkin is better at what he does than Andy Roddick is at what he does.

Penguins coach Michel Therrien is also the runaway coach of the year. From last to almost first?! Coaching teenagers?! You really can't overestimate or overemphasize what is happening in Pittsburgh this season. And two players who don't get enough attention are Ryan Whitney and Sergei Gonchar. If those two decided to retire and follow Panic! At the Disco around the country from gig to gig in a Toyota Prius, things would come tumbling down in Pittsburgh.

• What is happening in Buffalo this season is right on the heels of what is taking place in Pittsburgh. The Sabres don't have that transcendent, matinee idol in Crosby, but they have a pulse provided by fans that gives the Western New York experience a sense of community that is warm and pure. It is middle America at its finest.

Along with the Sabres, Buffalo had the NBA's Braves for eight seasons and it has the NFL's Bills, but has zero championships. Since 1960, Pittsburgh has three World Series titles, two Stanley Cups, five Super Bowls, "The Fish That Saved Pittsburgh" and Michael Keaton in "Gung Ho." That's why the Sabres' story is so compelling. A city and a fan base searching for their first championship. I'm getting excited just writing these words on the Buffalo story, a fan-first story during a time when so many sports stories are fan-last.

• There was more evidence this season that the NHL should probably just have two points for a win and nothing else. As I write this, the top eight teams in each conference have the most wins. Get rid of that OTL column and simplify things for fans.

• The NHL will have new uniforms next season, designed to repel water and sweat and protect the players, as well. I've been told there will be no third jerseys and home teams will return to wearing white, which is what every hockey fan wants. Every uniform you are seeing now will be a vintage uniform in two months.

• The NHL will again see large television markets, and traditional powers, not qualify for the playoffs, hurting national ratings on Versus and NBC for some games. New York (Islanders) is the No. 1 television market; Los Angeles, No. 2; Chicago, No. 3; Philadelphia, No. 4; Boston, No. 7; and Washington D.C., No. 8. On the other side, Pittsburgh and Buffalo are No. 22 and No. 49, respectively, and have been ratings darlings.

Versus and NBC will be rooting for the Penguins, Sabres and Rangers to advance in the East, and for Detroit, Minnesota and San Jose or Dallas in the West. The NHL will be working with Versus and NBC on two one-year television deals next season. Both have options to continue. Versus will pay around $70 million next season as the NHL's exclusive cable network, while NBC continues to pay no rights fees. The league recently signed a six-year extension with Canada's CBC at probably around $100 million a year. These kinds of television deals continue to make any comparisons with MLS, Arena Football, lacrosse, darts or poker incorrect and uninformed. 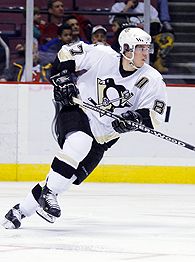 In case you missed it two weekends ago, the NHL on NBC (Bruins-Penguins and Rangers-Islanders, regionally) drew a larger national audience than ABC's NBA telecast (Suns-Kings).

• All of the Western Conference playoff participants will be 100-point teams. The East may very well have another Stanley Cup champion as the West teams will likely beat the living tar out of each other for the next two months. That would be four straight Cups for the East.

The West's strength is why I would probably pick Roberto Luongo for the Vezina Trophy as best goaltender. I'm all for Martin Brodeur winning as many trophies as possible -- he exemplifies everything cool about this game. He is stylish, consistent, good-natured and a champion. An icon. I would never argue on Marty winning anything, but my hunch says Luongo is the man by an eyelash. The Vezina is voted on by the general managers and they know the value of a goaltender. I believe they will look at Luongo as the biggest difference maker in net this season.

One reason the West is stronger than the East? The Joe Thornton and Roberto Luongo trades (both going from East to West) are the two most lopsided trades in the last 20 years and reasons why Mike Keenan and Mike O'Connell will never be NHL general managers again. Also, the two principals of those trades, Todd Bertuzzi and Brad Stuart, are now back in the Western Conference!

We will see another batch next season. After learning from the European way, Hockey Canada and USA Hockey have implemented coaching and training techniques that have brought North America to the forefront of the world in producing hockey talent. The current top five leading scorers in the NHL are all North American. The continuing production of great talent will further reduce fighting and justify the NHL's wishes to expand within the next five years. Canada and Connecticut, baby. Canada and Connecticut.

Enjoy the playoffs, and next season, stick around for the whole season. You don't know what you are missing.

A pool or a pond. A pond would be good for you.

It is Stanley Cup playoff pool time. The playoffs are a time when every emotion is spent to the fullest by players, announcers and fans. So, why not throw gambling into the picture and just have our hearts explode?!

There are so many different playoff pools. The one I'm in uses the following rules:

Toronto still has a decent chance of making the playoffs and hopefully it will come down to the "Hockey Night in Canada" game Saturday night against Montreal. But, for now, we will stay with this East postseason lineup: Buffalo, New Jersey, Atlanta, Ottawa, Pittsburgh, N.Y. Rangers, Tampa and Montreal.

As you can surmise from the points system, having a goalie go deep is vital. An overtime shutout alone gets you five points and each series win is a minimum of eight points. Barring a late injury or a first-round matchup that makes me feel uncomfortable, this will likely be the playoff pool team I submit next weekend.

Goalies
• Ryan Miller (Buffalo Sabres) and Jean Sebastien-Giguere (Anaheim Ducks). This is the safest bet for the Stanley Cup finals. The best teams don't always make it through three series; but, in terms of odds, the Sabres and Ducks are at least slight favorites in their respective conferences.

In this salary-cap NHL, all predictability goes out the window. Everyone has a chance. I think Buffalo's most difficult series will be in the second round. I think the Sabres will come out flying in the opening round. If they get past the second round, I think they roll in the conference finals in five. Anaheim will probably play Minnesota in the opening round and I think the Ducks can neutralize the amazing Marian Gaborik. Watching Gaborik right now is a breathtaking experience. You must watch him.