In the old days, the solution was easy enough.

A team gets off to a rocky start or goes through a prolonged slump, opens the window and yells "look out, coach coming!" And to steal a line used by almost all GMs after they defenestrate their bench boss: "You can't fire a whole team even if you might want to."

In the new NHL, however, when owners have to look below the fold in their morning papers to find their beloved team, it might not be the coach who comes to mind first, but rather the general manager. 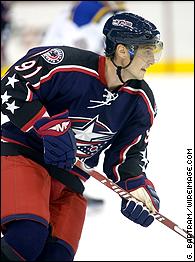 "Ownership is also feeling pressure because this is their deal," explained a prominent former player still closely connected to the game. "When the pressure gets anywhere near the ownership, they're going to get out the flamethrower and roast whoever's close to them, and that's the GM."

The new collective bargaining agreement is an owners' agreement. It leveled the economic playing field and saw an unprecedented distribution of talent around the league. The new deal also created unprecedented expectations in almost every corner, but those expectations also removed the safety nets that allowed many GMs in small or frugal markets to keep their jobs in the face of on-ice failure.

Under the old agreement, if teams such as Columbus or Anaheim or Nashville or Atlanta were spending only a third or half what teams in Detroit, Colorado and Toronto were spending, how could they be blamed if their squads couldn't compete? No more.

Just as there are many players and some coaches who have been slow to adjust to the new NHL, there are general managers who have been revealed as sluggish to adjust, as well, and it eventually will cost people their jobs, one former NHL executive said.

"You may not see it right away," added a top agent. "But it's definitely going to come. The playing field's been leveled, and owners are going to ask, 'Why aren't you succeeding?' That's what the attitude's going to be. Now you're going to have questions, 'What's so special about you?'"

Nothing illustrates this more succinctly than this week's trade of Sergei Fedorov from Anaheim to Columbus.

But Nash has played in just three contests and won't return until sometime in December after suffering first a high ankle sprain, then a knee injury. In Nash's absence, the Blue Jackets have been horrid, going 5-14, one point ahead of NHL-worst St. Louis. Adding insult to injury, the Blues blanked the Blue Jackets 2-0 Wednesday night in Fedorov's first game as a Blue Jacket.

Rumors swirled earlier this month that coach Gerard Gallant, a MacLean acolyte, was in trouble, but this is MacLean's team. And in a town where editorials recently have savaged him and the team's performance, and where a loyal fan base is in danger of eroding in the face of consistently poor play, MacLean thought it was worth the gamble. Fedorov has two more seasons left on his contract at $6.08 million a season after the current campaign.

It's a lot of money for an enigmatic star who missed all but five games this early season with a groin injury and failed to score in any of those five contests.

"Doug's feeling the heat in Columbus," the former executive said. "He created expectations and he created them on his own."

MacLean is not alone in searching desperately for answers.

In Boston, where the Bruins fancied themselves Stanley Cup contenders when GM Mike O'Connell spent to the edge of the $39 million salary cap, the pressure is on coach Mike Sullivan as the Bruins are a very ordinary 7-8-5. Not only is Boston 10th in the highly competitive Eastern Conference but it's 1-7-1 in the Northeast Division, where two good teams could miss the playoffs, given the emphasis on divisional play.

Normally low-key Sullivan put his team through rigorous workouts this week, but the Bruins still were downed 4-1 by the Leafs on Thursday night. But Sullivan isn't alone in the job security frying pan. O'Connell is also under the gun, given that he sold normally frugal ownership on a possible Stanley Cup run with free agents such as Brian Leetch (out with a knee injury) and Alexei Zhamnov, who has played only a handful of games because of injury.

The team's disappointing start must be especially galling to owner Jeremy Jacobs, given that he was a major force in both the lockout and the forging of the new CBA.

In St. Louis, the Blues ended a franchise-record 11-game losing streak by beating Columbus but remain the worst team in the NHL. No doubt coach Mike Kitchen, brought in late in the 2003-04 season to replace good friend Joel Quenneville, is sweating, but the real heat is on GM Larry Pleau.

The more Pleau has spent on the Blues in the past seven or eight seasons, the worse the team has performed. The team has advanced to a conference final just once since 1985-86 and is now bereft of young talent. With the Blues on the market, both Kitchen and Pleau seem secure until the ownership issue is resolved, but the long-term future looks bleak for both, not to mention for the team itself.

Although many might have predicted the Blues' woes, expectations were surprisingly high for a revamped Chicago Blackhawks team under rookie coach Trent Yawney. But the Hawks have stumbled through the first quarter of the season going 7-11, eight points removed from a playoff spot.

Yawney, who had good success with the team's AHL affiliate in Norfolk and is considered a good teaching coach, isn't likely to take the fall if the Hawks continue to stumble through this season. Instead, more serious questions must be asked of new GM Dale Tallon, who overpaid for netminder Nikolai Khabibulin, Adrian Aucoin and Martin Lapointe. Still, this is Chicago, where underachievement has become a way of life, so both coach and GM are likely safe for the immediate future.

New coach Jacques Martin is a proven winner, having overseen the evolution of the Ottawa Senators from laughingstock to perennial Cup contenders. But as the Panthers dropped their 10th straight game in Martin's homecoming in Ottawa on Thursday night, there have been questions about whether his defense-first style is well-suited to the new NHL.

But the larger issue seems to be Keenan's strategy of throwing aging, brittle veterans together with young players not yet ready to produce at the NHL level. Still, this is the first season for longtime friends Keenan and Martin, and the duo is unlikely to pay the price for the team's disappointments, at least in the short term.

The plight for owners and GMs in contemplating making coaching and/or managerial moves is one of timing. If a team fires a coach, can it find someone who can have an immediate, positive impact, one that will push the team back into a playoff position?

Stan Kasten, former president of the NHL Thrashers as well as baseball's Braves and the NBA's Hawks, believes NHL teams pull the trigger more often and more quickly than in any other sport.

Still, he doesn't think that the new landscape will see more coaches or managers fired but rather that the decision-making process might change.

Because of the parity that exists economically and in the standings, bad teams might not have to make up as much ground as in the past to become competitive. That might prompt owners to be more patient if they have confidence in their management team.

On the other hand, if a team is struggling, it's no longer feasible to remake a team by spending money on free agents or adding big salaries. Teams have to have sound scouting and development systems in place, as well as capable people at the NHL level. If this season appears to be lost, owners might want to give a new management team a head start on restructuring for next season.

GMs who have signed players are notoriously loyal to their own selections, another factor in ownership perhaps opting to clean house sooner than later.

Which brings us back to MacLean's trading partner in Anaheim, Brian Burke. Fedorov wasn't his guy, having been signed by his predecessor Bryan Murray, who is now coaching in Ottawa. Burke clearly thought the team would be served better by spending his cap money elsewhere.

Still, the deal represents a significant gamble for Burke, whose team, on paper, should be better than its 7-8-4 record.

The former Vancouver GM, who helped shape the Canucks into a perpetual contender while toeing the economic line, isn't in any immediate danger in his new post.

But if he can't find the pieces needed to push the Ducks into the playoffs and Fedorov blossoms in Columbus, surely Burke's value to ownership will be undermined.