ATLANTA -- You can plot the Atlanta Thrashers' metamorphosis from sub-.500 disappointment to Eastern Conference force along many lines.

There's Marc Savard's emergence as a bona fide scoring machine, avoiding the injuries that have plagued his career. 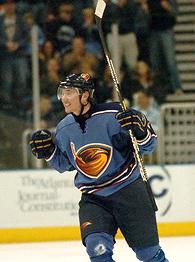 There are the unexpected offensive contributions of Greg de Vries, who accompanied stud Marian Hossa in the Dany Heatley deal.

But all of that is just scribbling around the borders compared with the real focus of the Thrashers' rosy picture: the lanky, sweaty kid in the goalie pads sitting over in the corner.

On a recent game morning, a reporter asked Kari Lehtonen whether he had a few minutes to chat.

"Get lost," he said, before breaking into a broad grin.

Who said all Finns are inconsolable depressives?

Not that Lehtonen hasn't had reason to be worried or depressed this season.

Twenty minutes into what was to be Lehtonen's breakout season -- his coming-out party as the team's goalie of the future -- he was in the trainer's room icing down a groin injury that would require almost half a season to heal.

During that stretch between the first period of the Thrashers' first game and Dec. 30, the Thrashers used four goalies -- including Adam Berkhoel and Michael Garnett, fifth and sixth on the team depth chart -- as they tried to keep their collective heads above water during Lehtonen's achingly slow recovery.

They did, thanks in large part to the surprising improvement in Garnett, who finished with a 7-0-3 stretch before being sent back to the Thrashers' AHL affiliate in Chicago last week. Garnett's fine play bought Lehtonen extra time, but a host of questions still remained as his return neared.

Would his apparently fragile groin withstand the heavy workload in order to secure the Thrashers' first playoff berth?

Would the fear of re-injury affect Lehtonen's agility, the strength of his considerably strong game?

What about his timing? His confidence?

Lehtonen has banished all those questions with apparent ease, going 5-2 since his return, including a four-game winning streak heading into the team's two-game Western trip this week.

"I've been happy that I've been playing consistently. I've been good in every game, but I'm not happy that I haven't played an entirely great game," Lehtonen said a few hours before he turned in a sparkling 37-save performance that led to a shutout of the St. Louis Blues.

Lehtonen was the second overall pick in the 2002 draft. He was the man the Thrashers hoped would erase a history of misguided goaltending personnel decisions, poor play, bad luck and general goaltending misery that had afflicted the franchise since the team arrived in the NHL in 1999.

Lehtonen was named The Hockey News' top prospect twice. He was sensational in two seasons with the Chicago Wolves, especially in the playoffs.

Scouts and observers spoke in hushed tones about his promise, suggesting he was better than Roberto Luongo was at the same age. Better than Rick DiPietro. Better than Marc-Andre Fleury.

Thrashers coach Bob Hartley likened Lehtonen's physicality and hybrid butterfly style to that of Patrick Roy. He also said Lehtonen's mental fortitude, his desire to be the go-to guy, also reminded him of Roy, who is considered the best money goalie ever.

"There were some weeks where things didn't go forward, I was starting to think maybe this thing is not for me and I'm not going to be able to play here well," Lehtonen said. "It was kind of up and down."

He is just 22, and recovering from this injury has been the biggest obstacle he has faced.

"I've always been going forward in my career, sometimes very fast, sometimes a little, but still going somewhere," he said. "It was difficult, but it has helped me as a person to realize not everything goes your way."

In theory, Lehtonen's return to action is the final piece to an enticing puzzle assembled by GM Don Waddell.

With free agents Peter Bondra and Bobby Holik joining established scorers like Slava Kozlov and Hossa, Kovalchuk and Savard, offense didn't figure to be a problem. And it's not.

Defensively, there are still issues. Atlanta has the 26th-ranked penalty-killing unit and is the 19th most penalized team in the league. The Thrashers remain 24th overall in goals-against average, but they have held opponents to three or fewer goals in nine of their past 14 games.

De Vries, who won a Cup with Hartley in Colorado, said the team's defensive communication under assistant coach Brad McCrimmon has improved dramatically.

"There were basically six new guys out there, and it takes time to communicate with each other. We've learned to talk to each other, to listen to each other's voices," said de Vries, who has chipped in 24 points, eight off his career best.

And of course, there's that lanky fellow.

"Having had the pleasure of putting Patrick [Roy] in net for five years, I know what his demeanor, just his presence in front of the net, would do for a team. So Kari Lehtonen basically brings this same presence to our team. Players, they feed off this," Hartley said. "There's no doubt in my mind. And we're not throwing anybody under the bus, but let's face it, we played with our fifth and sixth of the organization for basically two-thirds of the first half of the season, so mentally, it was tough on everyone."

As the Thrashers prepared to head west for a mini road trip to Dallas and Los Angeles, they are ensconced in seventh place in the Eastern Conference with a 23-18-5 record. They are 12-3-3 over their last 18 games at home and are 6-1 in January.

They have never been this good this late in the season. One Eastern GM recently said he has been warning his team to be wary of a surging Thrashers club he considers one of the most dangerous in the conference. But sometimes teams that have never been down this road before can be thrown off by the slightest bumps. And the East is painfully tight, with 10 points separating the fifth and 10th spot.

"I already had meetings with certain members of this organization at different levels to make sure that we're on our toes and we don't get stuck in the middle of a storm, whether it's panic, whether it's pressure," Hartley said. "There's lots of people that it's going to be their first walk in the big park, and it's a dangerous park. There are many things that can happen.

"But I think the adversity we faced in the first half could be a very positive tool for us to use and I think that we grew up a lot as an organization in this first half," said Hartley, who knows a thing or two about the big park, having coached the Colorado Avalanche to a Stanley Cup championship and three Western Conference finals in his first four seasons there.

There is no way to underscore how important these next 36 games are to the franchise.

Although attendance has improved with a 4 percent increase through 24 home games this season, there are still nights like this past Friday, when the announced crowd against St. Louis was 14,201 (out of a capacity of 18,454). The team's first playoff berth would help galvanize fan support and draw the casual fan into the excitement of a postseason run.

It was so in Nashville and, before that, in Dallas and San Jose. Failing to make the playoffs makes the team that much easier to ignore.

"It's time," said Savard, who is fourth in NHL scoring with 62 points in 46 games this season but has yet to play in an NHL playoff game.

"This is the year," GM Waddell added. "We need to make the playoffs for our fans."