RALEIGH, N.C. -- Matt Cullen was playing in a charity golf event with new Carolina teammate Bret Hedican before the start of the season when the two got to talking about Cullen's new team.

Cullen had signed with the Carolina Hurricanes before the lockout, so he knew little about the region or the team and was curious about what lay ahead. In spite of dire predictions about the team's chances, Hedican assured Cullen there was something special about this group of players, that good things were going to happen.

"Nobody believed it [outside the dressing room]," Cullen recalled last week. "It's funny how it's come true."

Every day in New York, NHL commissioner Gary Bettman must find a window with a southerly exposure and offer up profound thanks to Carolina GM Jim Rutherford, head coach Peter Laviolette, renaissance player and captain Rod Brind'Amour, superstar in the making Eric Staal and the rest of the dynamic Canes.

They are Bettman's new NHL.

They are living, breathing, skating, scoring proof that the lockout worked, that the salary cap works, that the new rules (and enforcement of the old ones) work. Forget the lame "Art of War" ad campaign, the NHL should have just brought some cameras into the RBC Center and let 'em roll.

Runaway leaders of the Southeast Division, within spitting distance of the top of the Eastern Conference and a Presidents' Trophy, the Carolina Hurricanes might well be the NHL's most exciting team to watch night in and night out.

Not bad for a team that in 2003-04 was the lowest-scoring team in the league, a team that couldn't compete with big-market clubs and a team whose fan base was leaking away.

Now, fans have returned en masse, and instead of just thinking about the playoffs, the Hurricanes will enter the playoffs among a small group of teams considered Cup favorites. Never mind saving the South for the NHL, the Carolina Hurricanes might just have saved the entire NHL.

Still, if people expected the Hurricanes to be sitting around their dressing room in late March giggling and whispering, "Gee, how did we do that?" they'd be sadly mistaken. Any discussion of surprise or of exceeding expectations is quickly, if politely, dismissed.

"Maybe your expectations [were different]. Not mine. And certainly not ours," Brind'Amour said. "I think that's where it gets mixed up. We're in a bubble in our room. You lose track of what other people are saying. There's no sense that we've done anything yet."

Throughout the lockout, owner Peter Karmanos was stridently hawklike in his views, popping off that players were overpaid and owners would never give in on their demands for a salary cap.

Karmanos turned out to be right, but the pressure then fell to Rutherford and Laviolette to make sure Karmanos didn't look the fool by failing to succeed in the environment he had lobbied so hard to create. 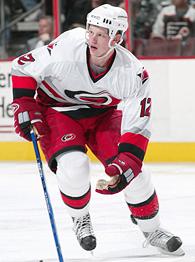 While many GMs seemed ill-prepared for a free-agent market that was surprisingly pricey, Rutherford found value in players such as former Tampa Bay Lightning winger Cory Stillman, a solid, underappreciated point-a-game player, and Ray Whitney, who has been productive if injury-prone.

Rutherford coaxed Oleg Tverdovsky out of Russia, and the smooth-skating defenseman has likewise been a benefit to the Canes' quick-strike offense. Frank Kaberle, the lesser of the Kaberle brothers, was acquired before the lockout and leads all Canes defenders in points, and netminder Martin Gerber, another pre-lockout acquisition, has been a revelation.

Justin Williams, once considered an underachiever, has rediscovered his scoring touch thanks to Laviolette's encouragement and had points in 40 of his last 57 games through April 2.

When first we saw him during his rookie season in 2003-04, Staal looked very much like what he was, an 18-year-old sticklike boy out of his depth. But the big center returned from spending the lockout in the American Hockey League as one of the league's dominant forwards. Through the Canes' first 72 games, Staal had 91 points, fourth in the NHL.

In recent weeks, Rutherford took advantage of significant cap room to strengthen his team's position further by adding highly coveted center Doug Weight from St. Louis and then Mark Recchi, ostensibly to fill in for the injured Erik Cole.

"Most of our additions were low-key by most of the league's standards, but they were great pieces to the puzzle," Williams said.

Did he ever think he would be such a piece?

"I am one of those guys," Williams said. "You get to a point in your life or your career and you're not just up and coming anymore, you've got to become that player. We have lots of guys like that.

"You've got to let the league know what you have, know who you are."

Oh, the league knows all right.

Williams and just about every other player on the team have had a hand in making a mockery of every preseason prediction that had the Canes as a team headed nowhere fast.

"In training camp, people couldn't wait to say how bad we were going to be," veteran Kevyn Adams said.

Yet, this team never bought into the negative press and consistently has found ways to win. From behind, blowing out opponents, tight games, run-and-gun games. You name it, the Canes can play it. Twice this season, they have rattled off nine-game winning streaks. According to the Elias Sports Bureau, only four other teams in the history of the NHL have accomplished such a feat.

And here's the rub.

Since early November, the Hurricanes have soldiered through a crippling array of injuries. In recent weeks, the team often has been missing six or seven regulars. In a recent 2-1 victory over Tampa Bay, the Canes were without Hedican, Cole, Josef Vasicek, Weight, Niclas Wallin, Andrew Hutchinson and Whitney.

Laviolette estimates the team will hit 250-260 man-games lost to injury by the end of the season. To put it in perspective, Tampa Bay likely will finish with about 60 man-games lost. If there is a silver lining to the injury epidemic, it's that the Canes have internalized the old adage about sucking it up. One piece goes missing, another piece completes that night's puzzle.

"We have no choice in it. It is what it is," Laviolette said. "It's frustrating because we've had a lot of good players that aren't available to us. I guess it says a lot about our team that we're still in the position we're in. Still, you'd rather have everybody healthy."

All things being equal, Laviolette will get his wish with all but Cole, who is recovering from a broken neck and is not expected back before the playoffs, giving Carolina as deep an offensive team as any in the NHL.

In the meantime, Laviolette is hoping to get his team through the last stages of what has been a startling metamorphosis: the evolution from playoff hopeful to Cup favorite.

Although the Canes have stumbled of late -- dropping five of nine, including two to the lowly Caps -- Laviolette doesn't see the transition from regular season to playoff hockey as changing the team's mind-set but as reinforcing what they've been doing all season.

"It's not so much about switching gears," he said. "It's not about the Presidents' Trophy or first overall; it's about winning and losing. We want to feel good when the playoffs come along. It's all about the playoffs. We've got to play the games [leading up to the playoffs]. We might as well win them."

People will point to the Lightning as the saviors of hockey in the South. After all, they're the first so-called Sun Belt team to win a championship, and their fan base has stuck with them throughout the lockout. But it's not necessarily the winning that will mark the long-term success of the Sun Belt teams but how they ride out the ebb and flow of their individual fortunes. And no team has ebbed or flowed as dramatically as the Hurricanes.

When Karmanos abandoned Hartford and moved the former Whalers to Raleigh before the 1997-98 season, there was great consternation among hockey purists. The fact the team played in faraway Greensboro before sparse crowds during the first two seasons did little to deter the notion that this was a huge mistake.

But after moving into a new building closer to home and making the playoffs in 1999 and 2001, the Hurricanes finally emerged onto the NHL's big stage in the spring of 2002.

After knocking off the New Jersey Devils and Montreal Canadiens, the Canes faced the Toronto Maple Leafs in the Eastern Conference finals. The Canadian media embraced the fervor Canes fans showed, arriving in the sprawling arena parking lot hours before game time to barbecue, play street hockey and party. Hundreds of Leafs fans joined the fun, and by the end of the series, Carolina officials had set up tents and televisions so fans who couldn't get tickets could watch the game outside.

The Canes dispatched the favored Leafs in six games, then faced powerful Detroit in the Cup finals. They shocked the Wings in overtime in Game 1 and dropped a heartbreaking triple-overtime contest in Game 3, bowing to the Wings in five.

But the Canes weren't built for the long haul.

The next season, the aging team was decimated by injury and went from the Cup finals to dead last in the league. The season after that, 2003-04, provided more of the same. In December 2003, coach Paul Maurice was fired and Laviolette, at loose ends since being dispatched by the Islanders, was hired.

The team worked hard, but the players couldn't score to save their souls, and the Canes finished out of the playoffs again.

The hard work mostly went unnoticed, but when Rutherford began to retool for the post-lockout NHL, he brought in players who fit both economically and with Laviolette's up-tempo, puck pursuit, puck possession style.

"Sometimes you have to get bad breaks before you get good breaks," Rutherford said.

Back in 2002, the team had pretty much peaked with its run to the finals. Now, the team is built for today and tomorrow, led by youngsters such as Staal, Andrew Ladd, Cam Ward and blue-chip defensive prospect Jack Johnson.

"I think it's turned out the way I figured it would and the way I projected it would," said Rutherford of the current campaign. "The coaching staff and the players, everyone, including myself, believed we had a strong team and that we could be a playoff team. The team has earned the right to be where they are. Nothing was given to them."

Every morning, a member of the Canes training staff posts the full Eastern Conference standings on a marker board in the Carolina dressing room. It is a constant reminder of the team's lot in life.

In the past, the board would have been a reminder of how much work needed to be done. For most of this season, it has been a daily confirmation of what has been accomplished -- so far.