This is not Peter and Anton Stastny risking their lives to defect from communist-ruled Czechoslovakia in the summer of 1980.

This is not Petr Klima meeting Detroit Red Wings officials in a German wood to secure his passage to the West in the mid-1980s.

This is not Sergei Fedorov leaving friends and family behind in Russia at the 1990 Goodwill Games in Seattle. 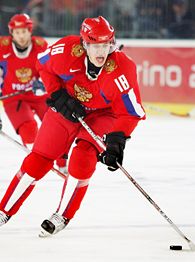 This Evgeni Malkin brouhaha is nothing of the sort. This is a boy, possessed of immense skill, promising too many things to too many people. Nothing more, nothing less.

Run and hide is more like it. After all, it's not as though Malkin tunneled his way out of Stalag 17 to freedom. The talented forward left a democratic country with open borders. Until he resurfaced in Los Angeles on Thursday, Malkin was not in hiding, he was simply hiding out. And that's a subtle but important distinction.

"He's a remarkable hockey player," a source familiar with the Malkin situation told ESPN.com. "But if Malkin gave you his word on anything, then you couldn't trust him. Look at his history."

Malkin, 20, is the proverbial couch cushion; whoever comes in contact with him last leaves a lasting impression.

Malkin's father, a former Russian elite league player, insisted Malkin should remain in Russia and Malkin dutifully signed a deal through 2008 with Metallurg Magnitogorsk. That contract had no "out" clause that would have allowed him to pursue his NHL career, even though he is widely considered the best player outside the NHL.

Who signs a deal like that? Someone who's getting bad advice and who's trying too hard to please everyone in his world.

In this case, Malkin's Russian advisers have a history of being compensated by Metallurg owners for delivering players to the team, so it's no wonder Malkin signed the long-term deal even though it made little sense in terms of his career, the source told ESPN.com. The source added that those same owners were so eager to keep Malkin in Russia for the coming season they were willing to pay North American agents to see that it happened.

Not that there hasn't been pressure from other directions.

The Pittsburgh Penguins would dearly love to see the second overall pick in the 2004 draft in their lineup on Opening Night in October. And certainly the lure of the NHL is strong for Malkin, especially given what Olympic teammate Alexander Ovechkin accomplished last season, taking the league by storm while playing with the Washington Capitals.

So, Malkin balked at the deal that he, himself, signed and dismissed high-profile agents Pat Brisson (who represents future teammate Sidney Crosby) and J.P. Barry before signing in June with the dean of NHL agents, Don Meehan, who represents Ovechkin and who helped shepherd Ovechkin through a court challenge from Moscow Dynamo last fall.

But Malkin's flip-flopping wasn't over.

Several weeks ago, Malkin severed ties with Meehan and returned to the Brisson/Barry camp. Malkin also managed to dispose of the two years remaining on his deal with Magnitogorsk and signed, some say under duress in the middle of the night, a one-year deal with the Russian team for the coming season.

Then, as the Metallurg squad prepared for training camp in Helsinki, Finland, last week, Malkin disappeared. From whom or what he was hiding in recent days is anyone's guess.

"He let the pressure get to him," his coach in Russia, Dave King, a former NHL and Canadian national team coach, told a Toronto sports radio station this week.

Although it would appear Malkin has stepped right into the pages of a John LeCarre novel, he is unique only in his propensity to sign on for anything with anyone. His exit strategy is no different from that of a handful of other players who have taken advantage of a Russian labor law that allows any worker to give his employer two weeks' notice and hit the road.

Alexei Mikhnov, the Edmonton Oilers' first pick, 17th overall in the 2000 draft, secured his release from Yaroslavl in this manner, as did Andrei Taratukhin, the Flames' second-round pick in the 2001 draft. Why no fuss over these players' departures from the Russian elite league? Well, they didn't sign a series of contracts with their Russian clubs before bolting and they don't represent the cash cow Malkin does to the Russian hockey powers.

Although Malkin will be bound by the same restrictions any NHL rookie faces with his entry-level contract, his earning potential is vast. He is also crucial to a Penguins' team whose own future is very much in doubt.

Thus, for team owners in the Russian elite league, Malkin was seen as a great weapon in their plan to either extract large sums of money from the Penguins or deny him access to the NHL in the hopes of securing a more lucrative transfer agreement with the NHL. It appears the Russians, who have refused to sign the International Ice Hockey Federation's current transfer agreement with the NHL, dream of a hockey world where teams are paid a king's ransom, as is the case with star soccer players.

That will never happen in hockey.

Perhaps the $200,000 fee paid by the NHL and its teams for European players doesn't seem like much compared with the $93 million Real Madrid paid to secure Zinedine Zidane from Juventus Turin. But the NHL is not beholden to the IIHF.

If IIHF member nations Sweden or the Czech Republic, major sources of NHL talent, suddenly decided they wanted $1 million per player, the NHL would walk away and simply sign players on its own, leaving the European countries with nothing, the same nothing the Russians are getting for their players now.

The NHL also has the power to deny players the ability to participate in IIHF events such as the World Championship or, at the very least, to make it very difficult for them to take part. This is a sensitive issue for the Russians, who are accusing the NHL of "sports terrorism" in the Malkin case but are hosting this year's World Championship in St. Petersburg and desperately want available NHL players to take part.

The Malkin affair does little to dispel the notion that the Russian elite league is little more than a shadow front for mobsters and bullies who will stop at nothing to get what they want whether it's money or hockey players -- mostly money.

Sources tell ESPN.com that new national hockey czar, Hall of Fame netminder Vladislav Tretiak -- appointed by Hall of Fame defenseman Slava Fetisov, who is the head of Russian sport -- was willing to sign the transfer agreement with the IIHF but folded when he was pressured by some Russian club owners.

"He is a terrific ambassador. Not such a good administrator," said one source close to the proceedings.

One longtime NHL agent, Matt Keator, suggested this case might be the catalyst to get the Russians and the NHL to resolve their differences because the situation will be repeated again and again until it is resolved.

"Perhaps this situation will bring the parties together to find common ground," Keator said.

As for Malkin, it's no slam dunk that he'll be in a Penguins jersey at the start of the season. It seems certain the Russians will sue Malkin and/or the Penguins, arguing that the two weeks' notice law in Russia was not meant for an athlete who signs a contract, as Malkin did.