One question in the wake of goalie Rick DiPietro's groundbreaking 15-year contract with the New York Islanders:

And why just DiPietro?

Owner Charles Wang has such a good track record in these kinds of matters, why not a 10-year deal for Arron Asham or Tom Poti or Alexei Yashin?

Oh, wait a minute, he already gave Yashin a 10-year deal. And look how lovely that's turned out for this once-proud franchise now reduced to a running joke both within the game and for those with a passing interest in the team.

Ha, ha, ha. Ho, ho, ho. Stop it, you're killing us. Or is it just the franchise that's being rubber-chickened to death?

The theory emanating out of Charles Wang's Long Island bunker is that in the wake of the team's management fiasco of earlier this summer, wherein it hired Neil Smith as GM only to can him 40 days later and promote backup netminder Garth Snow to the post, DiPietro's long-long-term $67.5 million deal would be a sign of stability.

Just because a television station runs a "Three Stooges" marathon doesn't mean the program director is a genius. It just means he has more "Three Stooges" tapes than he knows what to do with.

And while we don't necessarily mean to draw a comparison between DiPietro and the comedic trio, there is certainly an element of the slapstick when it comes to this deal and this franchise.

"It means the owner is a moron," one NHL executive told ESPN.com on Tuesday. "It makes no sense. This is all about Charles Wang's ego."

The most salient point in this tragicomedy is that DiPietro simply isn't that good a goalie.

Former GM Mike (insert the descriptor "Mad" at your convenience) Milbury traded away Roberto Luongo and the chance to draft Dany Heatley or Marian Gaborik so he could make DiPietro the first goalie taken with the first overall pick in 2000 in what was merely one of a handful of wretched deals that ensured the Islanders' perpetual mediocrity.

But the fact that DiPietro hasn't provided the kind of play a first overall pick should provide has now been exacerbated by Wang's wacky decision to lock him down for 15 years.

DiPietro, 25, handles the puck exceedingly well, and he has no shortage of confidence. But he has shown a tendency to go sideways, not just for a period or two, but for days at a time when things don't go his way. He was below average before the Olympics last season as the Islanders dug themselves an early hole. He was average at the Olympics as the Americans won one game during the Torino tournament. He was above average down the stretch when the Islanders were effectively eliminated from the playoff race. 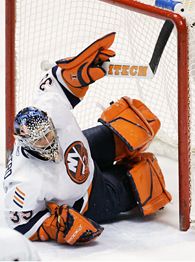 Average it out and you've got an average goalie (3.02 goals-against average, .900 save percentage) at an average price -- for a stupefyingly long period of time. Oh, that'll have the fans banging down the rotting doors at Veterans Memorial Coliseum in Nassau County and the new arena Wang hopes to build and the arena they'll have to build after that if DiPietro totters to the end of the 15-year deal.

In the new NHL, there's been a paradigm shift to paying players for what they might accomplish as opposed to paying them based on what has been accomplished. That's a good thing. It challenges teams to make difficult decisions about young players based on an organization's evaluation. The teams that do the best job of evaluating and developing their own talent -- and locking those players down -- will have the best chance at long-term, repeated success.

The Islanders haven't won a playoff series since 1993, and they're likely to finish dead last or close to it in the Eastern Conference this season. The organization is rife with dissension and inexperienced people at key positions.

DiPietro is as close a thing to a "franchise" player as the Islanders have, and that still doesn't justify this deal. Even if DiPietro's $4.5 million annual salary is miles away from the $7.6 million Wang is squandering every year to keep Yashin in caviar and cars, the decade-and-a-half term nonetheless hamstrings the team's ability to move forward for the length of the deal or until DiPietro decides to hang them up.

If the Islanders had locked DiPietro up for five or six years, which would have been excessive given his uneven play, such a deal would have made it difficult to go another direction in goal if the Islanders actually develop some top-notch prospects of their own. But a 15-year deal?

Those who rationalize the deal suggest that DiPietro might actually be a deal at $4.5 million a year depending on where the current $44 million salary cap ends up down the road. Well, that might be true if the cap goes up to $324 million, but it won't.

Assuming the cap is between $44 million and $50 million in the short term, there is a far greater likelihood that within three or four years DiPietro will become just as great an albatross as Yashin -- cheaper, yes, but every bit as difficult to walk away from.

If DiPietro suddenly becomes the reincarnation of Jacques Plante or Mike Richter, or even Tom Barrasso, and the Islanders consistently go to the playoffs, then Wang will have the last laugh. But that's not likely to happen.

What if, five years down the road, the Islanders stumble on a young netminder who is better and cheaper than DiPietro? And the chances are good they will. What then?
What if the Islanders actually found a team looking for goaltending depth or a team that believes DiPietro could be the final piece of a Stanley Cup puzzle? What GM in his right mind is going to take on a player who still has 10 years and $45 million outstanding on his contract?

The same number of GMs that are lining up to take Yashin off the Islanders' hands now. Zero.

The GM joked about what kind of reception he might get from his owner if he told him that he wanted to upgrade his goaltending and all it was going to take was $50 million in contract for one player.

This deal, coupled with Wang's impulsive signing and rapid firing of Smith, which prompted Islanders hero Pat LaFontaine to quit the franchise in disgust earlier this summer, will do little to correct the perception that while the NHL's on-ice product might be impressive, there remains a rot in ownership in some markets.

Another GM told ESPN.com that situations like that, and the one that exists on Long Island, are bad for the league because they strike at the league's most important commodity -- stability -- the very thing Wang believes the DiPietro deal brings to his club.

Of course, not feeling right has become a way of life on Long Island, and will be for an awfully long, long time to come.