Well, this ought to fix things up.

All this time, we thought the Chicago Blackhawks were a mess because of poor drafting, short-sighted free-agent signings and crippling injuries, and it turns out it was coach Trent Yawney's fault.

Never mind it was GM Dale Tallon who, back in July 2005, introduced us to Yawney as the man who would lead the Hawks out of the wilderness in which they've been stumbling for well over a decade. Nope, it turns out it was Yawney's fault, and Monday, Tallon put the Good Ship Blackhawk on the course to hockey happiness by naming his good pal Denis Savard as coach. 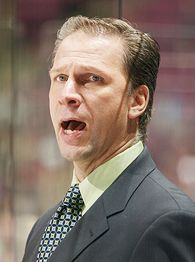 Of course, it's not over.

In places like Chicago, the pain never ends. It never ends because teams make decisions that ensure the pain just keeps on coming. Like Monday's decision, for instance.

Tallon implied that the Blackhawks needed to play a more up-tempo style that was more suited to the new NHL. But the team did play that way when it started the season 4-2 and forward Martin Havlat was leading the NHL in scoring.

But Havlat, a blue-chip player acquired from Ottawa in the offseason, has been out since Oct. 20 with an ankle injury. The team is also missing another key offseason addition, Michal Handzus (gone for the season) and just recently saw talented forward Tuomo Ruutu and No. 1 netminder Nikolai Khabibulin return to action.

Counting the game in which Havlat was injured, the Blackhawks have lost 12 of 15, 10 of those in regulation. With a 7-12-2 record, only Columbus has fewer points in the entire NHL. So, Yawney's firing can be entirely justified.

But justifying a decision is one thing; making a smart move to take the team forward is infinitely harder. And there is nothing to suggest hiring former Blackhawks sniper Savard will take the Hawks any closer to respectability. Instead, it all around smacks of the path of least resistance.

Local papers suggest Yawney and Tallon differed on how ice time was to be allotted to young players. What we are to infer from Savard's ascension from perennial assistant coach to the head coaching job is that he will do exactly what Tallon wants. And given Tallon's track record in identifying and assembling talent, there is nothing to suggest things will get better anytime soon.

An offensively gifted player who was elected to the Hockey Hall of Fame back in 2000 (why he is there is another debate for another day), Savard has been an assistant since December 1997, six months after announcing his retirement. Since that time, the Blackhawks have failed to win a playoff round and have missed the postseason seven times, eight if you count their inevitable exclusion this season.

Must have been Craig Hartsburg's fault or Dirk Graham's or Lorne Molleken's or Bob Pulford's or Alpo Suhonen's or Brian Sutter's -- they're the other head coaches under whom Savard toiled.

Surely, Savard's imprint is found somewhere on this team.

Last season, the Blackhawks were 29th in goals scored; the season before, 24th, the season before that, 19th. This season, they're 27th in average goals per game. How about the power play, Savard's specialty? The Hawks are 24th in power-play efficiency this season. A season ago, they were dead last with the man advantage.

Yes sir, the Blackhawks have really lit it up under Savard's offensive tutelage. Must have been the head coaches stifling his creativity.

But somewhere beneath the surface, Tallon saw something that led him to announce Monday's moves. Mover over Billy Reay, Denis Savard is in the house.

Actually, what is more likely the case is that Tallon felt the noose tightening around his neck. The Hawks were once again off the rails, and one of the best hockey men in the business, Rick Dudley, has been biding his time as assistant general manager. Feeling he didn't have Yawney's full attention, Tallon sacked his coach and grabbed the closest guy in a Blackhawks jacket.

If this was really about taking the team in a different direction, the Hawks would have dumped Yawney when they were losing seven straight earlier this month and brought in Ken Hitchcock. But they waited too long, and now Hitchcock is trying to turn around fellow Central Division weak sister, Columbus.

But there are other coaches out there for a team determined to facilitate real change.
Pat Quinn is a master at up-tempo hockey, and he's a proven winner; Andy Murray is less up-tempo, but a fine teacher of young players; Chicago's own television analyst, Ed Olczyk, has shown he can lead young players and would have been a bigger step toward the right road.

But that would have required a little effort and a little foresight -- qualities in short supply in the Windy City.