ATLANTA -- We recall the day Darcy Tucker found out they were calling him Sideshow Bob.

It was during the playoffs against New Jersey in the spring of 2000 and a group of reporters caught up with Tucker in the Leafs' hotel. Someone mentioned that a New Jersey writer had come up with a new moniker for the feisty Leafs forward.

Now, when someone tells you that you're being referred to as Sideshow Bob, you can react two ways: you can laugh it off and move on or you can blow a gasket.

Blowing the gasket has always been Darcy Tucker's way.

And perhaps what made the Sideshow Bob label so annoying to Tucker was that it was so, well, right-on.

An offensive force coming out of junior in Kamloops, where he collected 277 points over a two-season period, Tucker spent the early part of his NHL career trying to find a niche for himself in Tampa and Montreal.

When he came to Toronto in February 2000, he relished his role as an agitator, a fiery thorn in opponents' sides. Sometimes, though, the thorn became a red-hot poker or a chain saw or a mass of rabid fire ants.

Tucker was constantly chirping at opponents from the bench or baiting officials. Every couple of games, he could be counted on to be found writhing on the ice in agony after a calamitous collision or battle, only to return a shift or two later, his helmet slightly askew, his eyes ablaze.

One night during a 2002 playoff series against the New York Islanders, Tucker reacted to an official's call by hoisting a white towel on the end of his stick. Sitting next to him on the Leafs bench, Alexander Mogilny looked up and yanked the towel down, shaking his head with disgust.

Throughout that Islanders playoff series, Tucker bore an eerie resemblance to Jack Nicholson's character in "The Shining"  except scarier. It was during that series that Tucker low-bridged current teammate Michael Peca, a move that ended Peca's season and, some thought at the time, his career.

Then, there was the night Tucker and brother-in-law Shayne Corson tried to chase down and dismember Buffalo enforcer Rob Ray in the hallway that connects the dressing rooms at the Air Canada Centre after Ray made an uncomplimentary comment about the Tucker-Corson family.

And yet, there was always this other side of Tucker, a side that desperately wanted to be accepted, to be part of things. He was always available to the media, always willing to offer assessments on various elements of the hockey dynamic in Toronto, often in thoughtful tones that belied the mayhem that seemed to follow him on the ice.

Although he was born in quiet Castor, Alberta, Tucker loved the perpetual hockey buzz in Toronto and desperately wanted to help bring an end to the Leafs fans' collective suffering.

One playoff year against Ottawa, the Leafs rallied from a 3-2 series deficit, and Tucker was asked what he was thinking about as the team faced elimination. With surprising candor, Tucker replied that all he could think about was what the newspapers would say if the Leafs lost.

We feel a mild case of longing for those days, because for all intents and purposes, Sideshow Bob is no more. In his place is a more restrained, subtle Tucker with gaskets securely in place. 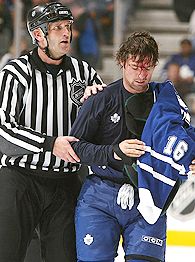 Entering Thursday's 5-0 loss to the Atlanta Thrashers, Tucker's 16 goals stood as the second most in the NHL and his 11 power-play goals led all shooters.

If there once was a hunger to be in the spotlight no matter what it took to put him there, that hunger has been replaced by a more focused desire to find his way into the spotlight by filling the net.

"Yeah, I've got asked a lot of questions lately about why things have gone well and the way I look at it, things can change in a minute," Tucker said before Thursday's game. "You've got to keep working at it and playing hard. [I'm] getting a lot of opportunities to put the puck in the net right now. I've left some chances out there, really. When you play the game [the way I am], you want more every time you go on the ice. Being hungry and wanting to play well is the driving factor toward that, I guess."

Atlanta coach Bob Hartley has watched Tucker's evolution from junior scoring star to all-star pest to unexpected scoring star, and isn't surprised by that evolution. He is the kind of player who can change the course of a game with his scoring touch and with his intensity, Hartley said.

"You never have enough players on your team like Darcy Tucker," Hartley said. "I think the guy is a very underrated player in the league."

That's not to say Tucker isn't still wired for sound.

Toronto coach Paul Maurice believes that's how Tucker has to play to be at his best.

"Darcy needs to play close to that edge. He can't not wind himself up," Maurice said. "He's not a big guy. That's how he's survived in this league. And he throws them pretty good if he has to."

But as the game has changed, so too has Tucker. It's a testament to his maturation, and the evolution of the Leafs franchise.

"You have to remember how much the game's changed in three to four years. There were so many more scrums in the game of hockey, whether it was during the play and after, and Darcy always found a way to be in the middle of those things," Maurice said. "So, as a spectator, it maybe distracts you from watching the other things that he did offensively. Now, with the power play that we have and the way he plays the game, you start to realize that he has a really good sense of timing of when to bring it to the net and when not to. There's a lot more game offensively."

When Tucker first came to the Leafs, he came as Shayne Corson's brother-in-law, the tagalong hoping to be included with the big boys in the big boys' town. Now, with a cast of youngsters like Kyle Wellwood, Alexander Steen, Matt Stajan and others, Tucker is the big boy. It is a role he relishes.

"I've been around awhile now, especially in Toronto. To help our hockey club, I have to be one of the leaders on the team and provide some leadership every night  we're not where we want to be as a team yet," Tucker said. "Let's just put it this way, I'm having fun playing the game right now, and you know what, with responsibility comes a lot of pressure and to deal with that pressure you've got to go out there and perform, and I'm having fun doing that now."