Whenever a coach is hired in the NHL, the first thing you have to check is the comfort-o-meter. That's the completely subjective measure of whether the hire makes sense.

Like Randy Carlyle in Anaheim. If you know GM Brian Burke, you know Carlyle was hand in glove -- a fisted glove to be sure, but a glove nonetheless.

Dave Lewis in Boston? Not so much.

This week, Brent Sutter's long-anticipated arrival in New Jersey seems to be another fit.

All jokes aside about when GM Lou Lamoriello might give Sutter the heave-ho (the over/under is the first game of the playoffs), Sutter will bring the exact kind of temperament (moderately snarly), work ethic and system that Lamoriello's teams in New Jersey almost always have reflected, whether it was under Jacques Lemaire, Larry Robinson or Pat Burns.

Sutter appears to have achieved the difficult task of marrying his personae as a player to a coaching style that isn't one-dimensional. He has coached wildly talented junior teams to international success and he has made less talented teams in Red Deer competitive. In short, he appears, at least at the junior level, to have been able to do it all.

In New Jersey, he will have to coax more offense out of a Devils team that ranked 14th in the East in goals scored, yet entered the playoffs as the No. 2 seed in the conference. He will have to do so without Scott Gomez and Brian Rafalski, both of whom departed via free agency and neither of whom has been adequately replaced.

The defending Atlantic Division champs will face a stern test from improved clubs in New York, Pittsburgh and Philadelphia. But if there is a coach who appears to have the wherewithal to keep the perpetually competitive Devils on track, it is Sutter.

Yashin's agents have said they're not happy with offers from teams now that Yashin is an unrestricted free agent after being bought out of his whopper contract by the New York Islanders. Further, they are suggesting that Yashin might take his stick and puck and go back to Russia. Just curious how Yashin's significant other, supermodel Carol Alt, might view a long winter in Omsk?

Seriously, though -- Yashin remains the most intriguing of the free agents still available on the market. He always will carry the baggage that comes from being an elite talent who never really delivered the goods. But as a second-line center and power-play contributor who realistically could chip in 70 or more points, Yashin is surely a fit for some team in the NHL.

That's provided he can get over his hurt feelings at having to play for somewhere around $3 million a year. 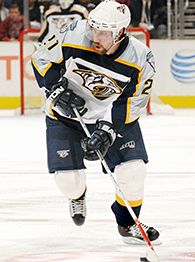 What about Foppa?
The other top free agent whose presence on any team could be a significant factor is Peter Forsberg (we don't count Teemu Selanne, who almost certainly will return to Anaheim if he doesn't retire).

The Denver Post, quoting a Swedish paper, suggests Forsberg's troublesome ankle is feeling better after surgery, although he hasn't skated and might not for a few weeks. This suggests the possibility that Forsberg, if he intends to return to the NHL, might not rush himself back for the start of the season, biding his time and getting in shape for a return after the season begins.

In some ways, this might make Forsberg eminently more attractive to GMs, who will naturally be leery about committing big dollars to a premier player whose history of injuries makes him a big-time gamble. Forsberg earned $5.75 million last season, and while he wouldn't command nearly that much this season, he won't come cheaply.

The Avalanche, Forsberg's former team, seem to be a logical landing place if he does return. But if he isn't ready to commit before the start of the season, other teams may become more attractive, including Forsberg's old team, the retooled Philadelphia Flyers. There, Forsberg might have an opportunity to complete some unfinished business.

And now for something completely ridiculous ...
We were pleased to see the inventive Boogaard brothers, Derek and Aaron, find a way to give back to the hockey community in the offseason -- by holding a fight camp.

The two thugs on skates managed to attract 30 campers, ranging in age from 12 to 18, at the event in Regina, Saskatchewan, according to Canadian newspaper reports.

Derek, the 6-foot-7 member of the Minnesota Wild considered to be one of the league's premier pugilists, was quoted as saying the camp was really about how players can protect themselves while fighting. Now there's a guy who's thinking outside the box.

Our suggestion to young hockey players: If you don't want to get hurt fighting, then don't fight. But that's just us.

Here are some camps the Boogaards might consider hosting in the future -- Smart Camp, Skill Camp or Hall of Fame Camp. Or maybe not.

Life lesson
One of the measures of John Ferguson's legacy is how he has been remembered since his passing after a long battle with cancer. There have been kind words and high praise for one of the game's toughest competitors and respected evaluators of talent.

But the stories are ultimately the true testament to his character.

I first met Ferguson (sort of) as a young news writer in Windsor, Ontario. Ferguson and his wife, Joan, had made their home in the Windsor area, where Ferguson indulged his love of horses. In 1989, Ferguson released an autobiography written with Stan and Shirley Fischler entitled "Thunder and Lightning."

A lifelong Montreal Canadiens fan, I was asked to write a review. I'm not sure whether I expected "War and Peace" (surely not from Ferguson), but the review began something like this:

"Reading John Ferguson's life story entitled 'Thunder and Lightning' is a little like being pummeled in the corner by the big forward."

Needless to say, Ferguson was not amused and made it clear to the sports writers at the paper that he would, indeed, like to get me in a dark corner for a few choice words and maybe a little more. It wasn't so much the review, but the fact it came from some (at that point) anonymous source; a kind of sneak attack, the kind Ferguson never launched, never tolerated.

Later, when I became part of the sports writing fraternity, Ferguson never mentioned the review and always treated me with kindness and respect, always asking after family and career, even if, in the back of his mind, he might liked to have leveled just one a little elbow to even the score.

Another gentleman
On the subject of loss, the hockey writing community lost a true gentleman Tuesday with the passing of longtime Washington Capitals beat writer Dave Fay of the Washington Times.

"In true Fay style he battled till the end. This time even that look could not stop this disease. He fought a good fight, but now he is at rest," his wife Pat told members of the Professional Hockey Writers' Association (PHWA).

Lovingly nicknamed "Crusty" by those in and around the Capitals' dressing room which he'd patrolled since the early 1980s, Fay, 67, was brutally honest in print and relentlessly kind in person.

During the Stanley Cup finals, Fay was announced as this year's recipient of the Elmer Ferguson Memorial Award, selected by the PHWA, and will be honored in November during the annual Hockey Hall of Fame ceremonies in Toronto. He will be missed by those on both sides of the notebook.