During his tour of duty as coach of Metallurg Magnitogorsk of the Russian elite league, Dave King was approached one night by an aging, barrel-chested man.

The man, clearly a hockey player of some kind, extended his hand, not to shake King's hand, but to show the former NHL and Canadian national team coach the ring on his finger. It was a ring that identified the man, defenseman Yuri Lyapkin, as a member of the fabled Russian national team that took part in what has come to be known as the 1972 Summit Series. 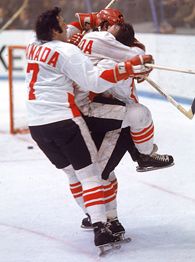 That ring signifies membership in a rare club, a club whose members were responsible for one of the most significant hockey moments in the history of the game.

The series punctuated by Paul Henderson's seminal goal with 34 seconds left in the eighth and final game in Moscow changed the face of international hockey forever. It made icons of the men who played on both teams and created memories that continue to intrude on game's consciousness 35 years later.

"It's a badge of honor, a badge of pride," King said of those players who took part in the tournament. "It puts them all in a very special category over there."

Imagine throwing a great stone into a deep, still pond and watching the ripples continue to move toward the shore. In some ways, this is the effect the Summit Series has had on the game.

"In some ways, it is surprising [that the Summit Series has continued to endure]," King told ESPN.com this week, "because 35 years is a long, bloody time. This event [the '72 series] should be well into the history of the game."

Yet it's not. Not yet. Maybe not ever.

"'72 was just so, so special," Hockey Canada president Bob Nicholson said. "I think after 50 years, it'll still have the same footprint on the game in our country."

Nothing will ever replicate the emotion that permeated the first Summit Series; to suggest anything might do so, including this current junior version, is pure fantasy.

But it is possible to draw a line from that historic event to the latest endeavor which begins Monday in Ufa, Russia -- an eight-game series between major junior all-star teams from Canada and Russia. As Canadians and Russians prepare for this new collision called the Super Series, it's intriguing to imagine what might have happened had the Russians been able to close out the 1972 series, managed to win or tie just one more game on home ice after taking what looked to be an insurmountable 3-1-1 lead through five games.

When Henderson scored to secure the series victory, legendary broadcaster Foster Hewitt signaled the goal as "the goal heard 'round the world." It brought with it tremendous relief, not just for the players, but for an entire nation.