ATLANTA -- If greatness has a footman, a manservant, a chambermaid, then surely Martin Gerber is that person.

For the past two years, when hockey has been played on its grandest stage, the Swiss-born goaltender has been there. Sort of. Far from the spotlight, Gerber has existed in the shadows of that greatness while others have basked in the glory.

Two seasons ago, Gerber won 38 games for the Carolina Hurricanes, but after illness laid him low at the start of the playoffs, he was shunted to the sidelines in favor of rookie Cam Ward, who went on to earn playoff MVP honors as Carolina won its first Stanley Cup.

By the time the confetti had been swept away in Carolina, Gerber was on the move.

A free agent, the 33-year-old signed a three-year, $11.1 million deal with the Ottawa Senators, who expected him to provide the kind of clutch goaltending that eluded the franchise for years. Gerber promptly imploded. Like the team, he got off to a rocky start and gave way to Ray Emery, who led the Senators to their first Stanley Cup finals appearance last spring. Gerber was again an afterthought, a shadow in the corner of a dressing room on the edge of greatness.

And yet, after an offseason of uncertainty during which his name was constantly bandied about as possible trade bait, Gerber is once again flirting with greatness, or at least the possibility of greatness.

With "starter" Emery still recovering from offseason wrist surgery, Gerber has re-established himself as a top-flight NHL netminder in stunning fashion. He is the first Senators netminder to go 4-0 to start a season. He has a 1.73 goals-against average and .949 save percentage. He will go for his fifth straight victory Thursday night against Carolina after getting his first night off of the season Wednesday when the Senators went on to beat winless Atlanta, 3-1.

"I just tried to get a new start and start from scratch, more like flip the page and really try put everything out there and see how it goes," the soft-spoken Gerber told ESPN.com on Wednesday.

Part of Gerber's problems last season were team problems. The Senators were trying to adjust to the absence of defensive giant Zdeno Chara. There were a myriad of defensive pairings and line combinations. No one played particularly well until close to Christmas time. There were calls for everyone's head from captain Daniel Alfredsson to then-coach Bryan Murray to, of course, Gerber.

Now, the team's comfort level throughout the lineup is sky-high. 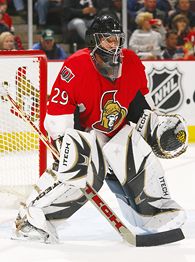 Everybody's more comfortable to start this season, Paddock said. "And he's shown the most comfort."

Has Paddock thought about what will happen when Emery returns? He grins. Or is that a grimace?

"No. We've got two goalies that both can be No. 1 in the league and we'll see how that goes," said Paddock, who was an assistant coach last season before taking over as head coach when Murray ascended to the general manager's office this offseason.

A big part of Gerber's comfort this season is between the ears, accepting that being a goaltender in a Canadian city is different than tending goal pretty much anywhere else, different certainly than in Raleigh.

"On a personal level, you're frustrated because you're not playing the way you know you can," Gerber said of last season.

Then, you throw in the media and fan reaction.

"If you haven't grown up in Canada, I don't think you can imagine how it is," he said. "Just the passion the people have, everywhere ... any place you go, it's hockey overall. So, that's something that was different to me and with the whole hype and the media around it, yeah. You have to kind of try and get through it and try and learn from it and get used to it. But it's also nice to be in the spotlight like that. It's definitely more fun."

The offseason theory on the Sens' attempts to move Gerber was his contract would make it virtually impossible to move him; as though no team would ever consider paying him that amount of money, as though he was some sort of Swiss Jose Theodore.

Now, Gerber's play (he's actually 14-0-2 in his past 16 regular-season games) makes him not only a sudden valuable commodity, but also presents the Ottawa Senators with a fascinating dilemma.

Let's say Gerber is the same goalie that set a franchise record for wins in Carolina two seasons ago and came on in relief of Ward to win a crucial game in the Eastern Conference finals against Buffalo to help the Canes advance to the Cup finals. Does Murray, who first had Gerber when both were in Anaheim, want to part with the kind of safety net all championship teams need?

During the 2005-06 season, from post to post and through the crease, Gerber might have been the best in the NHL, said national analyst and former NHL netminder Darren Eliot. "No holes," Eliot said. "Compact and under control."

This season? "He's back to that. He's so driven. What an opportunity for him."

But if Murray doesn't deal Gerber, does he have enough cap room to bring in the secondary scoring most observers believe will be crucial for the Senators to make another deep playoff run?

What if the Shangri La opportunity to land free-agent center Peter Forsberg (a fantasy shared by 29 other NHL teams) becomes a reality? Murray would certainly have to move a significant piece of Senators' furniture to make that happen.

What if it comes down to a choice between dealing Gerber or Emery, who signed a three-year deal worth $9.5 million in the offseason?

"Has my thinking changed [since the start of the season]?" Murray said in an interview Wednesday. "We feel we're very fortunate to have two guys we think are top-end guys."

Until Emery comes back and proves he's back to last season's form, the issue is moot; but Murray said he has received no calls on Gerber since the start of the season nor has he been canvassing other GMs about potential interest in the netminder.

Still, Murray acknowledged that paying as much as the Sens are for goaltending may not be ideal given the salary cap and things may change and the team's needs may become more clear-cut as the season moves along.

But with each passing day, with each Gerber victory, he takes another step out of the shadows.