EDMONTON, Alberta -- It's hard to look at Ryan Smyth and not see Alberta, not see the Edmonton Oilers.

There is a gap where several bottom teeth used to be, his hairstyle (call it early mullet) is roughly the same as it was when Oilers star Glenn Anderson accidentally backed over Smyth during a Team Canada training camp more than two decades ago, and his nose has a meandering cant to it that suggests a logging track.

Smyth nearly made it to the end of his media briefing Monday in Edmonton before breaking down. Strangely, it was a question about whether Smyth was surprised he hadn't yet become emotional that gave the now Colorado Avalanche forward pause, prompting his eyes to redden, his voice to crack.

"I'm sure I'll break down tomorrow," Smyth admitted at the morning press conference held in a downtown Edmonton steak house that he still owns part of.

"A lot of great memories," he said.

And then, he paused again, this time even longer.

"It was tough leaving. Obviously, it's going to be tough tomorrow."

"But I'm just glad to be back in Alberta."

There were tears aplenty last February when the longtime Oiler was dealt to the New York Islanders at the trade deadline and one expects Tuesday evening will call for tears as Smyth plays his first game here since the deal that rocked the city.

"They're probably one of the best fans in the game," Smyth said. "Obviously, going to the Stanley Cup finals there, how electrifying it was in the building. What the fans mean to the city, what the city means to the Edmonton Oilers organization, is great. So, I have some very good, fond memories."

The story of Smyth's return to Edmonton isn't your average, run-of-the-mill story about a player whose time ran out in one town and how he ended up somewhere else and then had to go back home and talk about it.

This is something more.

On one level, this is the story of how two people that wanted the same thing couldn't quite get there. In this case, Smyth's departure to Long Island marked the symbolic and literal change of everything for GM Kevin Lowe and the Edmonton Oilers.

That's one thing I regret about being an Oiler, it's not winning the Stanley Cup.

The deal set Lowe on a path that has made him the scourge of NHL GMs (just ask Anaheim GM Brian Burke, whose jabs at Lowe have become legendary) and changed the face and future of his club.

Unable to land top-notch free agents (another Alberta native, Sheldon Souray, being the notable exception), the Oilers tendered an offer sheet to Buffalo forward Thomas Vanek, which was later matched by the Sabres. Then, they signed Anaheim Ducks rookie Dustin Penner to a five-year deal worth $21.25 million, a deal that early on looks like a lot for a little.

For Smyth, who knows what path that moment has set him on?

All we know is, having briefly seen him in an Islanders jersey and now in an Avalanche jersey, it still doesn't quite jibe. Like seeing Raymond Bourque wearing Avs garb or Guy Lafleur in Rangers blue or Larry Robinson in Kings black and silver. You just shake your head at the incongruity of it all.

Hey, it's a business. We get that. And, in the end, the business was what separated Lowe from Smyth, and Smyth from the only NHL team he had ever known.

This offseason, Smyth was courted by half the teams in the NHL and ended up signing a five-year, $31.25-million contract with Colorado. He said he's already fitting in on the ice and his family is finding Denver to be a nice place to live. Avs public relations man Jean Martineau quipped that Smyth was already bugging him for World Series tickets.

So, even though it's been almost eight months since Smyth was traded, Tuesday's game looms as a kind of demarcation point, an acknowledgement of something special, an acknowledgement that the past is the past and you can't go home but you can go to the visitors' dressing room.

"Yeah, that's going to be a little difficult," Smyth said about the prospect of entering Rexall Place as a visitor for the first time after 11-½ years of entering it as a favorite son.

"Obviously not only being at the rink, but going a different way. You know the direction you go to the rink and then going into the locker room. Obviously, the visitors' locker room, it's going to be very tough and emotional," Smyth added. "But I'm very excited and very eager about the challenge and looking forward to it actually." 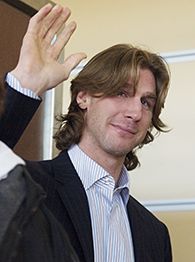 We in the media like to suggest a team can have a soul or a heart, and that those ephemeral qualities are produced often by one or two players. In Edmonton, Smyth represented many things to fans there. Before the lockout, when the Oilers looked like they might sink into the Northern Alberta tar sands and players like Bill Guerin, Doug Weight, Curtis Joseph and Anson Carter were regularly shipped off because the team couldn't afford them, Smyth was a constant.

A native of the resort town of Banff, south of Edmonton, Smyth played hard, he played hurt and he simply stayed and stayed. When the lockout ended and the Oilers stocked up on talent like Chris Pronger and Michael Peca, the Oilers marched to the seventh game of the 2006 Stanley Cup finals. In some ways, it was as though Smyth and the team and the fans had all been rewarded for hanging tough.

After the finals, Pronger bolted in a matter of weeks, as did half the team, and the Oilers were wracked by injuries to start the 2006-07 season. Smyth was about to become an unrestricted free agent that summer, but everyone assumed he was going to get a deal done in Edmonton even if he was asking for about $5.5 million a season with a no-trade deal. It was a lot, even for a Ryan Smyth.

The two sides went back and forth and then, at the last minute, both sides drew lines in the sand. The gap, which turned out to be a difference of $100,000 a year over the life of the deal, could not be closed.

The sight of Smyth trying not to let his emotions bubble over as he boarded the plane out of Edmonton was a powerful reminder that as much as this is a business, it's a business that deals in loyalty and passion and emotions that can't be found on a bottom line but live in players like Smyth.

Colorado GM Francois Giguere recalled Monday how Smyth has already become a magnet for young players like Wojtek Wolski as Smyth works with him after practice on tip drills and the like. Avs coach Joel Quenneville joked that he thinks Smyth is part trainer given the amount of time he spends at the rink.

But there is nothing in the way of bitterness about how things unfolded here in Edmonton. Even now, Smyth remains respectful of not just the team, but Lowe and coach Craig MacTavish. He credits MacTavish with helping him become a better player on and off the ice.

The two played golf this summer and Lowe joined them on the back nine. They chatted amicably, but not hockey talk, Smyth said.

"The organization gave me an opportunity to play in the National Hockey League," Smyth said. "It was a privilege. There are no hard feelings at all. Kevin had to do what was best for the organization and we just went our separate ways."

Shortly before he finally broke down, Smyth was asked if he'll bring the Stanley Cup to Edmonton if the Avs become champions.

Yes. It's home after all.

"That's one thing I regret about being an Oiler," he said, his voice catching just a little, "it's not winning the Stanley Cup."

What else would you expect him to say?