BRANDON, Fla. -- Martin St. Louis, the blood and soul of the Tampa Bay Lightning, was trying to figure out how many headlines he has seen over the past few years that made him cringe. 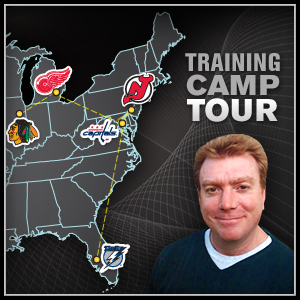 Whatever the final tally, you can be sure it was pretty much all of them.

Owners squabbling; owners running out of money; owners trying to trade the team's biggest stars; or the team finishing dead last in the NHL.

We joked that there's a good reason for the sprinkling of gray apparent in St. Louis' short-cropped hair. The former league MVP laughed and figured with the way things have turned around in Tampa, he should be back to a full head of jet-black hair by the end of the season.

"The past two or three years, there's been so many negative headlines about our team. I think that's in the past now," St. Louis told ESPN.com. "It's nice to be a Tampa Bay Lightning again. That means a lot."

The reason for that optimism seemed perpetually on the move. Rookie GM Steve Yzerman chatted quietly with new owner Jeff Vinik and his management staff while watching players go through their first on-ice drills of training camp.

He met with the media.

He chatted with players and coaches.

"What Steve brings is a lot of respect back to the franchise," St. Louis said.

If there's a word that's bandied about regularly at Lightning camp, it's "stability."

It's been 27 years since Yzerman first appeared at an NHL training camp. The first pick of the Detroit Red Wings in 1983 (fourth overall), he spent every training camp through the course of his Hall of Fame career in Red Wings red and white. When he retired after the 2006 season, he simply walked down the hall from the dressing room to a Red Wings office and spent the past few camps watching the red and white as an executive.

Imagine that; for the first time in 27 years, Yzerman's world is not colored entirely by red and white or defined by the Winged Wheel logo. But if you're looking for wistfulness or nostalgia from Yzerman, you have come to the wrong place.

"I don't think about it," Yzerman told ESPN.com at the start of camp. "This is very exciting."

A year ago, Yzerman was tasked with putting together Canada's team for the 2010 Olympics in Vancouver. As pressure-filled as that situation was -- and one that ended with a dramatic gold-medal win for the home side in what was arguably the greatest hockey tournament of all time -- that job is child's play compared to what Yzerman has undertaken here in Tampa.

The Olympic team was a job defined by one moment; Yzerman's new job will be measured in years.

Still, the early accomplishments are significant.

Within a matter of months, Yzerman has hired a new coaching staff, one that includes the hottest young coaching prospect in the game in Guy Boucher; he signed his first crop of free agents, including former Cup winner Pavel Kubina, who will anchor the defense; and he acquired his first players via trade, including adding veteran sniper Simon Gagne. He has overseen his first draft and rookie camp, and now is monitoring his first training camp.

He is trying to build a team that will compete this season and restore the faith that has eroded in the past three or four years while keeping an eye on the future.

Miss Detroit? He could hardly have time to get all weepy. "This is what I've always wanted to do," Yzerman said.

Yzerman is not the first great player to take on coaching or managing duties. The NHL is awash in Hall of Famers in suits (Al MacInnis, Cam Neely, Ron Francis, Mark Messier). But Yzerman is poised to do something quite unique if he can get the Bolts turned around.

He has moved seamlessly from elite player into management, guiding Canadian teams to success internationally and moving seamlessly into his first GM role. Would it be a big surprise if at some point we think of Yzerman first as a team-builder and second as a player?

"It's going to take time to do everything we want to do," Yzerman said.

He talks about building depth in the franchise, building a good minor league team in Norfolk and being able to take time developing players, something the Red Wings have become absolute masters at.

Unlike his old hockey home in Detroit, where the connection between the community and the Red Wings has been rock solid for years, Yzerman has to worry not only about the product on the ice, but also how to reconnect that product with a community disillusioned by ownership squabbles and poor play.

"You have to run a good organization [on both the business side and the hockey side] in order for the community to want to see it," Yzerman said. "We have to prove we're good people and a good, well-run business. There's a lot of work here, but to me, it's really exciting. There's great opportunity here, but it's not going to be easy."

We were in Phoenix for training camp the year Wayne Gretzky took over as a head coach. There was a period of adjustment for everyone concerned in breaking down the "Oh my gosh, I am playing/working for Wayne Gretzky" dynamic. In the end, maybe those natural feelings of awe sometimes got in the way of getting work done. There is, and will be, some of that here in Tampa.

The team's top goal scorer and 2008 No. 1 draft pick Steven Stamkos told ESPN.com he found the experience of meeting with Yzerman this offseason "surreal."

"He was one of the players I grew up idolizing, so it was definitely cool to sit down with him and have a meeting," Stamkos said.

But if Yzerman's personality is any indication, those moments will dissipate very quickly.

"I'm the GM of the Tampa Bay Lightning. What I did as a player now is irrelevant," Yzerman said.

Just as he adjusted his game from being a pure producer of offense to one of the game's most complete players during the late 1990s, Yzerman has now shifted focus once more. Now, the challenge is to become a good NHL general manager.

"And I'll be assessed that way now," Yzerman said. "The players are going to assess me now in the same way that I assess them."