What a fall it's been for the Chicago sports fan. Fall, as in the season.

Ha! You thought I was referring to one of Chicago's sports teams taking a plunge! C'mon, why all the doom and gloom? Oh, yeah, the Cubs play in your town. Still, the Cubs spent this past fall spending a ton of money, and they hired Lou Piniella.

The Bears are doing well. Fans have time to debate whether Rex Grossman should remain the quarterback and if rookie Devin Hester should be getting the ball on offense too. 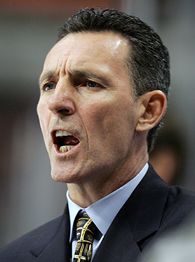 And then you have the Bulls, who have sweated out the headband controversy and are now red-hot.

But that's not all you Chicago fans should be raising a glass to this holiday season.

Have you noticed what your Haaaaaawks have been doing lately?

Leave it to Hall of Famer and Blackhawks legend Denis Savard to provide a much-needed breath of fresh air in the Windy City.

The man who goes by "Savvy" has lifted the spirits of these Blackhawks, who have posted a 5-1-3 record and earned 13 of a possible 18 points since he replaced Trent Yawney as coach.

There is no question Chicago's resurgence has also been helped by the return of the team's best offensive playmaker in Martin Havlat (18 points in 11 games), who missed 19 games with a high-ankle sprain. The team has also received a boost with the rejuvenated goaltending of a now healthy Nikolai Khabibulin.

Still, Savard has come in and changed the team's mind-set. That was his first objective for a club he believed was playing just to keep the game close, not playing to win. The days of Yawney's "defense-first mind-set" are gone. Now, the speedy Blackhawks are attacking and playing a new NHL-style under Savard.

"The first line I told my players on my first day on the job was, the only fear that they should have is not giving a good effort," Savard told me on Thursday. "If a player makes a mistake while giving effort, no problem. That's why we have practice. We will fix the mistake so it doesn't happen again."

Savard brings not only his Hall of Fame résumé (he had 473 goals and 865 assists in his 12-plus seasons playing in Chicago) but also genuine enthusiasm. 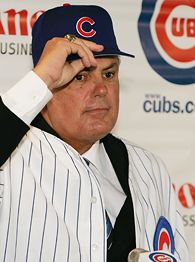 The result: the players are mirroring the coach, who, in his playing days, was the master of the spin-a-rama. In a very short amount of time, Savard has spun the direction of this hockey club, an Original Six franchise once considered among the NHL's elite that has been to the playoffs only once since 1997.

Among those who believe the Blackhawks are good enough to compete for one of the final two playoff spots in the very deep Western Conference is NBC and Versus analyst Ed Olczyk. The former NHLer is also calling 39 games for the Blackhawks.

Olczyk, a Chicago native who played his first and 1,000th NHL game in a Blackhawks uniform, says Savard not only has made the players more relaxed since taking over behind the bench, but also has given the team a "face." Savard makes the team more marketable with his magnetic personality. Olczyk should know. "Ollie" told me he had to do the same thing when he was the coach of the Pittsburgh Penguins.

"Savvy is, and will always be, the Blackhawks," Olczyk said. "He not only brings a calmness to his team, but also to the fans who were getting tired of all the changes and instability and the losing that came with it. The team and this city was in need of a new voice, yet a familiar face, one they can call home. This is still a hockey town."

A member of the Blackhawks' coaching staff since 1997, Savard is grateful for finally getting the chance to be the team's head coach.

"I'm excited and I'm not going to take a day for granted," Savard said. "I know how fast it can go the other way."

After talking with Savvy, it's hard not to be convinced that he's got the Blackhawks on a mission.

The Hawks are right on target, just like Savvy's patented spin-a-rama.

Hooked on hockey, Linda Cohn is an anchor for ESPN, ESPN2 and ESPNEWS. She has been with the network since 1992 and promises a gluttony of glove saves in her weekly column.