Hockey players would be able to use a computer to find their perfect line mate, a Match.com-type search for a soul mate on skates.

The result? Line mates who anticipate each other's moves on the ice, translating into escalating scoring production, resulting in big goals and larger victories. These line mates would also share similar interests away from the rink.

Guess what? We don't have to wait 50 years for such a dynamic duo. In case you haven't noticed, there is a terrific tandem in Tampa Bay right now that fits the description. I'm talking about Vincent Lecavalier and Martin St. Louis, who have a great chance to become the first teammates since Mario Lemieux and Jaromir Jagr to be Hart Trophy finalists. 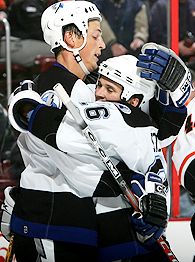 While there is a certain 19-year-old superstar in Pittsburgh who might have a say in whether Vinny and Marty can make history, it's still a scoring race worth watching.

St. Louis and Lecavalier may never have been in this position if it wasn't for Lightning coach John Tortorella. This season, Tortorella decided he would match up his two superstars together more often, remembering how well they played together during the Olympics toward the end of last season.

This season, playing on the same line with Vaclav Prospal, Vinny and Marty clicked. The chemistry was there. What began as an experiment ended up becoming the secret formula to the Lightning's resurgence as a power in the Eastern Conference. Just two seasons removed from the Lightning's only Stanley Cup championship, Lecavalier said, "We knew if we kept producing, Coach would keep us together."

Through Thursday's games, Lecavalier has a franchise-record 45 goals; St. Louis has a personal-best 39 goals. Since the All-Star break, Vinny has 15 goals and 11 assists; Marty has nine goals and 16 helpers. In that same span, they've hardly been shut out (Lecavalier, just three times; St. Louis, four).

When I asked Vinny about recently reaching the 40-goal plateau, breaking the team record previously held by Brian Bradley, he said, "I always thought 40 goals was unreachable for me. Last year, when I scored 35 goals, I thought hopefully one day I could get to 40."

Tampa Bay general manager Jay Feaster believes Vinny has just scratched the surface of what he can do.

"Before the season started, I told the Lightning beat writers I didn't expect Vinny to score 40 goals, I expect 50," Feaster said. "I knew Vinny could deal with the expectations we had of him. It was getting him to understand he was more than capable of reaching them."

But it's not just the offense. Lecavalier has developed into one of the league's best two-way players and a force on the team's improved penalty-killing unit. When I asked Lecavalier what was behind his career year, he didn't hesitate to credit St. Louis.

"Marty is so determined. He goes hard every night," Lecavalier said. "You just can't slow down when you play with him. Once he steps on the ice, he doesn't stop. So I couldn't either."

For St. Louis, the Hart Trophy winner in 2003-04, this season marks a return to greatness. After compiling just 61 points last season, he has 39 goals and 52 assists so far in this campaign. His magnificent play hasn't surprised Feaster, either.

"At our exit meeting at the end of last season, I'll never forget his words," Feaster recalled. "He told me, for the first time in his career, he wasn't an underdog, he was an underachiever. I knew he never would allow that to happen again."

While Lecavalier and St. Louis have given Tampa Bay fans hope for a another run at the Cup, there were a few icy patches along the way that nearly broke these two apart. Because of their mutual admiration, there are times when the pair gets a bit too cute for Tortorella. They get too caught up in trying to please each other that they pass up their own scoring chances. The coach most recently noticed it in a few games after the All-Star break.

"When our goalie coach, Jeff Reese, asked Lecavalier about it, Vinny explained with tongue in cheek, 'It's like any relationship,'" Feaster recalled. "At the beginning, everything is going great, but then you hit a rut. You take time away from each other [All-Star break], and when you return, you're trying very hard to make the relationship work again. You want it to be perfect."

Sounds like words straight from a Journey ballad. It would be fitting, because the '80s group is Vinny and Marty's favorite band. Their favorite song: "Don't Stop Believin'." Lecavalier and St. Louis won't be going their "Separate Ways" any time soon. Good friends, great teammates and, perhaps, future Hall of Famers.

Dr. Phil, you're not needed here.

Hooked on hockey, Linda Cohn is an anchor for ESPN, ESPN2 and ESPNEWS. She has been with the network since 1992 and promises a gluttony of glove saves in her weekly column. You can e-mail her at linda.cohn@espn.com.