It is a measure of Sidney Crosby's ever-increasing impact on hockey, and the industry, that most of the issues surrounding the game, either real or falsely hyped, seem to center around him.

When you think about it, that's pretty remarkable for a 19-year-old playing in a 30-team league with more than 700 players.

Take the great scheduling debate, for example. Was it about Florida petitioning to have St. Louis come to town more often, or Anaheim imagining the gate receipt bonanza if Ottawa made the trip to Orange County multiple times a season? Neither. It was focused, primarily, on Western Conference teams complaining that the league's current schedule doesn't guarantee them at least one visit per season from Sid the Kid.

There was also the phony "new uniforms!" story during All-Star week. The Reebok garments made of new material looked remarkably like the ones NHLers are already wearing, with a few different stripes here and other zigzags there.

But what, it was asked breathlessly, did Crosby think of the new uniforms? Well, duh, let's see  He shills for Reebok, so not surprisingly, the young man from Cole Harbor, Nova Scotia, really liked them.

And who, of course, could forget the long speculation and final decision on the 2005 entry draft, the first one after the lockout that wiped out the entire 2004-05 NHL season. It wasn't about which team would get to pick first. It was about which team would get to pick Crosby. To the NHL's credit, it did make lottery day pretty darn exciting. Clever boys, they made it into a TV show and everything.

Just imagine -- a different ping-pong ball bounce and the Penguins might already be en route to Kansas City.

So, it's fair to say, Crosby has an amazing impact on NHL issues and discussions, often without actually saying a single thing himself.

It brings us to the latest campaign to hit the hockey world: the "Save Sid" campaign.

If you were to believe the recent hysteria, most of it emanating from a fairly (but not wildly) rough-and-tumble match between Pittsburgh and Montreal last week, you'd think Crosby is under an unrelenting assault by NHL muggers, forced to walk the gantlet every single night against opponents determined to dismember and disembowel him with fiendish fouls and dark, medieval practices.

Compared to the abuse Bobby Orr and Maurice Richard and Mike Bossy dealt with over the course of their splendid careers, young Mr. Crosby is being treated with velvet gloves.

People love to repeat the silly NHL cliché that players used to respect each other in the good old days and don't now, but talk to players who played then and they laugh at the very notion.

To them, modern NHLers are all chummy, well-fed union brethren who share golf games, and sometimes accountants, between playoff contests. Back in the day, they'd have fights in All-Star Games. These days, the only sign of anger in the midseason "classic" comes when somebody misplaces his BlackBerry.

Still, there are those who believe Crosby's very life is in danger every time he steps on the ice, and to remedy the situation, the Penguins need to immediately acquire a, ahem, "policeman."

For those unfamiliar with hockey talk, that's another word for a complete moron who likes to fight and can't play at all and steals the job of a real athlete who is good enough to be in the NHL but has to toil in the minors. A cement head. A thug. Cro-Magnon Man on blades of steel.

This isn't a new matter for discussion in hockey. Rather, like the beanball in baseball, it's a vestige of cruder times that just won't go away, no matter how the sport matures and develops and evolves.

The truly hilarious part about this call for muscle is the reference point is always the same.

"Well, you remember how nobody went near Wayne Gretzky during his days in Edmonton, because, if they did, they knew they'd have to deal with Dave Semenko."

Seriously, do you ever hear of another star protected by another goon when these discussions come up? Never mind nobody went near Gretzky most of the time because, well, nobody could catch him. Never mind Mark Messier was even scarier than Semenko, or that when the Battles of Alberta ensued between the Oilers and Calgary Flames, both sides could line up more than a few nasty hombres. 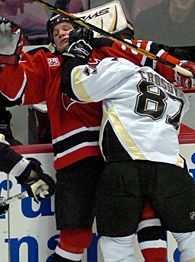 If anything, simply because Gretzky and Semenko played on the same team together, the connection between the "safety of a star player" and the "paid muscle" has been exaggerated ever since. Thus, a covenant for the church of hockey: If you've got a star, you've gotta have a goon.

The problem is this: The supposed given simply doesn't stand up to even the most superficial analysis.

For starters, Crosby and the Pens seem to be faring quite well these days, which makes you believe other teams love the fuss over the supposed need for a goon in Pittsburgh because it would mean taking a more talented player off the roster and replacing him with a knuckle dragger.

The Penguins' power play is awesome. More to the point, Crosby has been known to whine more than some would care for, but he's also a rugged player who fares well in heavy traffic and doesn't steer clear of the big bodies out there.

He's incredibly strong on his skates, can take a hit, and, if necessary, give one out. He's also a decent diver, which means enemy players have to be careful about giving him a rough ride in case he decides to deliver the half gainer and send them to the penalty box.

Some point to the fact Crosby was recently poked in the abdomen by Jason Blake of the Islanders and butt ended by Maxim Lapierre of the Canadiens as evidence of a need for protection.

Well, you'd be an absolute fool to believe none of the players who fancy themselves as "agitators" would be bothered by the presence of some big galoot in the Pittsburgh lineup, who almost certainly would not be on the ice with Crosby. The Pens, after all, have a couple of those types in their lineup (Jarkko Ruutu and Ronald Petrovicky). Last time I looked, Ruutu had absorbed more shots to the chops than Chuck Wepner and was still smiling that infuriating smile.

Ladies and gentlemen, hockey's a physical game, and until they put quarterbacks' red practice shirts on players with more than a point-per-game average, the skill players are going to get hit, and being skill players, they're not going to like it.

Moreover, while some assume the presence of a badass or two automatically throws a force field around finesse players, that's not necessarily the case. On Tuesday, for example, the presence of newly acquired Ranger Sean Avery sure didn't deter Devils blueliner Brad Lukowich from laying out New York speedster Petr Prucha with a devastating body check. That same night in Edmonton, the Oilers had their newest Semenko, Zack Stortini, all revved up and ready to go, but Vancouver winger Matt Cooke took great delight in laying a tough body check on Edmonton winger Ales Hemsky. There was also the silliness in San Jose as tough guys Scott Parker and George Parros reduced their hand-to-hand combat to near farce by throwing their gloves at each other and into the stands.

Most goons aren't usable by playoff time, and more and more, teams are finding they're of little value at any time. It's worth pointing out the Carolina Hurricanes won last season's Stanley Cup with only one player amassing more than 100 penalty minutes, and defenseman Mike Commodore is hardly a goon.

So who was protecting Eric Staal and Rod Brind'Amour and Cory Stillman and Justin Williams? Guess they didn't need protecting.

And neither do Sidney Crosby and the Penguins.

Damien Cox, a columnist for The Toronto Star, is a regular contributor to ESPN.com.