Things are looking a little bleak for the NHL's Original Six these days.

Only the remarkably resilient Detroit Red Wings are assured a postseason berth, the result of some more clever personnel maneuvering by GM Ken Holland and his staff, plus the obvious benefits of playing in the improving but still mediocre Central Division.

The New York Rangers, meanwhile, would be in if the Stanley Cup playoffs began today, but they're hardly home and cooled out.

The Toronto Maple Leafs are still in the picture if not in the playoffs, while Boston and Chicago will miss by a considerable amount.

Which brings us to the Montreal Canadiens.

Hockey's most famous -- and successful -- team.

Hockey's New York Yankees. (Or as hockey aficionados might suggest, the Yanks are baseball's version of the Montreal Canadiens).

While the Habs are officially one of the O-6 group, they've always seen themselves as just a little different as well, a bit apart as it were, and for good reasons.

There's all those Stanley Cups, for starters, 24 of 'em.

There's the multicultural accent on their franchise due to their revered position in French Canada, a historical and commercial platform unique in North American sport.

Finally, while the others may go off into the hockey wilderness for long stretches, the Habs always, always get back to the business of winning sooner as opposed to later.

It's been 14 years since the Habs knocked off Los Angeles on home ice to lift hockey's silver chalice one more time.

Fourteen years of not being even remotely close. The longest Cup drought in team history.

To many clubs, of course, that's not very long at all. The Blackhawks haven't won it all since 1961, the Leafs since '67. Before the Rangers snared the Cup in 1994, they'd gone 54 years without slaking their thirst for champagne.

Detroit has three Cups in the past decade but before that suffered through a 42-year Cup slump.

Boston, finally, hasn't won in 35 years, and before winning twice in the early 1970s went 29 years between championship seasons.

So nobody, it's fair to say, feels bad just yet for the Canadiens. If another 30 years go by, well, then we'll see about sympathy.

This season has been such a trying experience for the Canadiens, with such a wide variety of on-ice and off-ice problems, that, lo and behold, this franchise just doesn't feel that special any more.

Combined with the long wait since the last Cup, it seems ordinary, really.

More just like any number of other teams in the rapidly changing culture of a league in which teams like Carolina, Tampa Bay, Dallas and Colorado -- teams that weren't even in existence when Patrick Roy led the Habs to the '86 Cup -- have made it to the mountaintop.

Which makes you really wonder; in a world in which the Notre Dames fall prey to the Winthrops, are there really any special teams any more?

The Canadiens still do have a wildly partisan following, mind you, and the 21,000-plus that pack the Bell Centre regularly produce the NHL's most nerve-jangling, exciting atmosphere.

That makes them wonderfully loyal, for if there was a year that would make even a true bleu, blanc et rouge supporter look away, this might be it:

• The goaltending, historically a team strength, is a dog's breakfast.

The No. 1 job has fallen by default to Slovak rookie Jaroslav Halak, mostly because last year's hero, Cristobal Huet of France, is sidelined after hamstring surgery and Swiss national David Aebischer has been wholly unreliable.

• The rookie coach, Guy Carbonneau, has been under fire for his handling of a variety of problems. His status as a former heart-and-soul member of the hockey club, a captain, no less, hasn't bought him much wiggle room.

• Winger Sergei Samsonov, the only significant free-agent move the Habs made last summer, has been unproductive and unhappy. He's now nailed to a press box seat, with Carbonneau more inclined to use defensemen Mathieu Dandenault and Mark Streit up front than release Samsonov from purgatory.

Of late, Samsonov has voiced his displeasure, saying he regretted signing with the club in the first place. Still, he has another year left on his deal at $3.5 million per, and unless the team wants to eat that salary or is able to trade the sulking Russian, this is a marriage that may be dragged through the mud for a while yet.

• Then there's veteran forward Alexei Kovalev. Several weeks ago, remarks he allegedly made to a Russian newspaper ripping Carbonneau made their way into a francophone daily, forcing Kovalev to claim, naturally, that he'd been misquoted.

Carbonneau didn't really seem to believe him, but decided he had bigger fish to fry and gave the veteran a pass.

Then, 10 days ago Kovalev awoke to find he suddenly had a mysterious case of vertigo that he worried might force him to retire. A week later, however, he was back in the lineup for a Saturday night win over Toronto.

• Defenseman Sheldon Souray, arguably the team's best player this season, is an unrestricted free agent in July and is expected to leave Montreal, probably headed for the West Coast.

Souray has said all the right things, but insiders say he's had it with the day-to-day scrutiny of playing for the Canadiens. Combined with the Samsonov mess, the Habs' traditional struggle to lure free agents may be about to take a turn for the worse. 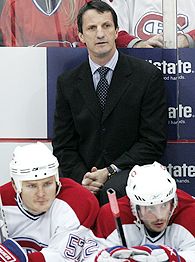 • GM Bob Gainey suffered through a terrible personal tragedy in December when his daughter, Laura, was swept overboard and presumed dead while working as a crew member on the tall ship Picton Castle on Canada's east coast.

Since then, the classy Gainey has understandably all but gone into hiding while still running the hockey club. He didn't even speak publicly on trade deadline day.

• Owner George Gillett, the first American to ever own the Canadiens, has seemed to have his acquisitive eye elsewhere all season long. He and Dallas owner Tom Hicks purchased English soccer giant Liverpool and captured international headlines, and of late there have been rumors that Gillett is looking to buy into NASCAR.

• Captain Saku Koivu has struggled to score consistently. Despite organizing a foundation to buy badly needed cancer detection equipment for a Montreal hospital in the wake of his own battle with non-Hodgkin's lymphoma several years ago, Koivu, a Finn, has nonetheless been criticized for not being able to speak French.

• Rookie Guillaume Latendresse cracked the team in training camp and, despite inconsistent play, has 16 goals, more than Kovalev.

More important, however, Latendresse is one of a small clutch of Quebecers in the Montreal lineup along with center Maxim Lapierre, Steve Begin and Dandenault.

This matters very much in Montreal, where ethnic and linguistic issues are never far from the conversation, and one of Kovalev's alleged comments to the Russian newspaper was that Carbonneau has dispensed favorable treatment to Latendresse and Lapierre.

Meanwhile, another talented young francophone star, Angelo Esposito of the Quebec Remparts, is available in the entry draft this summer, but the Canadiens are unlikely to draft high enough to get him.

• The Habs have experienced some bad feelings all season with Pittsburgh star Sidney Crosby, only the NHL's most valuable person at the moment.

Lapierre may or may not have butt-ended Crosby in a game this season, and in a Penguins-Canadiens contest in Montreal the crowd taunted Crosby with chants of "faker, faker" and enforcer Aaron Downey openly mocked Crosby's alleged penchant for diving.

Perhaps there's a sense of disappointment mixed in with the competitive juices. Crosby's father, Troy, was a Montreal draft pick as a goaltender but didn't make it, and Crosby was the most prominent player in the Quebec junior league for two years as the star player for the Rimouski Oceanic.

All in all, the team that has for decades been the class of the NHL sure hasn't look like the NHL's classiest team in its interactions with the Pittsburgh star.

• One of the greatest Habs, winger Guy Lafleur, has had his family's name in the news for the wrong reasons, not unlike those facing Philadelphia Eagles head coach Andy Reid.

Lafleur's 22-year-old son, Mark, was recently ordered into rehab before he faces trial on a variety of charges, including forcible confinement and sexual assault of a minor.

All in all, then, it's been an excruciating year of tragedy and tribulation for the Habs, and now a playoff berth may not be in the cards.

Then again, it's a testament, perhaps, to the durability of Les Habitants that they are still in the playoff hunt at all.

And still capable of being better than some of their Original Six rivals.

Halak out-goaltended Leafs veteran Andrew Raycroft Saturday to lead the Canadiens to a shootout victory in which he stoned three of four Toronto shooters.

Then, on Tuesday, he made 30 saves to shut out the Bruins 1-0, and once more grainy memories of past Montreal goaltending heroes were exhumed to see if Halak, who played in the ECHL last year, might be the newest such surprise.

Ken Dryden, of course, was the most notable when he jumped into the Canadiens lineup late in the 1970-71 season, stunned the Bruins in the first round and ultimately led Montreal to another Cup.

At one game over .500 in his brief NHL career, Halak doesn't have all the earmarks of a modern-day Dryden.

But until Huet comes back, he may be the best shot the Habs have.

Latendresse, meanwhile, scored the only goal against the Bruins, and he and other fellow youngsters like Mike Ryder, Chris Higgins, Mike Komisarek and Andrei Kostitsyn have been the best Habs of late.

So there's a future brewing in Montreal. But a present?

The temptation is to say no chance.

Then again, surprise Cups in '71, '86 and '93 should always lead one to ponder the legendary magic of the Canadiens -- if it still exists -- before writing them off.

Damien Cox, a columnist for The Toronto Star, is a regular contributor to ESPN.com. He is the author of "Brodeur: Beyond The Crease" and "'67: The Maple Leafs, Their Sensational Victory, and the End of an Empire."