Truth is, they aren't even really the Original Six.

Quebec was in the NHL before New York, Detroit, Boston and Chicago ever were, as was Hamilton.

Pittsburgh, interestingly, had a franchise before the Rangers, Red Wings and Blackhawks were ever born. 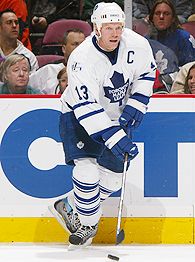 So the name "Original Six" is, while grand in tone, somewhat misleading. In fact, those six teams -- Toronto, Montreal, Detroit, Boston, Chicago and the New York Rangers -- didn't even exist as a stand-alone group until after World War II.

Today, it's fair to say the majority of NHL fans are far more familiar with the Original 21. Or the Original 30 ("You mean Nashville hasn't always had a team, Grandpa?").

Still, the Red Wings might well be the league's most popular team on a city-by-city basis, with the Rangers not that far behind.

So, to some, there is a special allure to those six franchises. In Canada, the Leafs and Habs always will be viewed through a different telescope than the Canucks, Senators, Oilers and Flames.

You could argue, however, that the league has spent more time promoting all of its new franchises than protecting the integrity and status of the so-called Original Six.

At the same time, the six clubs haven't always done themselves proud. Chicago hasn't won a Stanley Cup since 1961, the Leafs since 1967. The Rangers have won once in 67 years. The Red Wings missed the playoffs 15 of 17 years from 1967 to 1983. The Bruins had a golden age in the early 1970s, only to see their place in the New England sports landscape, and hockey in general, slowly deteriorate in recent years. Same for the Blackhawks.

This season, however, there is a sense something is changing with this historic group. You might even be able to call it the Rise of the Original Six.

For the first time in more than a decade -- back when there were "only" 26 teams -- it appears at least possible that all six clubs will qualify for the Stanley Cup tournament. Since then, the Canadiens, Rangers, Leafs, Bruins and Hawks have missed postseason play a collective 28 times. Only the mighty Wings, with three Stanley Cup victories over that span, have managed to maintain a level of top-notch quality.

The damage to the reputations of those teams has been significant, as has been the damage to the league's profile, particularly at playoff time, when major markets are missing. Clearly, there's value to the teams and the league when the Original Six clubs are successful; and, right now, five of the six, excluding the wobbly Leafs, are having what they would term successful seasons.

Henri Richard and his 11 Stanley Cup rings -- a record unlikely to ever be broken -- remain the measuring stick for playoff success, so using our Richard Head Meter, here's how we rate the chances of each member of the Original Six getting into the playoffs:

The Wings haven't missed the playoffs since the 1989-90 season, and they're not about to start now. General manager Ken Holland has done a remarkable job in organizing this team to make a clean transition from the end of the Steve Yzerman era to the present, with forwards Henrik Zetterberg and Pavel Datsyuk the new leaders of this team and defenseman Nicklas Lidstrom still among the very best in the sport.

The toughest news for the Wings is that the rest of the Central Division finally has improved. Through Sunday's action, every team in the division had a winning record, the only division that can make that claim. Still, the Wings sit atop the entire conference, a tribute to Holland.

New York Rangers
It's all looking good for the Blueshirts, hockey's best defensive team, right now. It doesn't seem to matter that the team's two big-name free agents, Chris Drury and Scott Gomez, essentially have been offensive busts, or that the blue line lacks an elite offensive-minded defender. Henrik Lundqvist is looking like the next Martin Brodeur, and Brodeur's still playing across the river.

The Rangers are tied for the Atlantic Division lead, but there are land mines ahead. Sean Avery is looking like a leader now, but that could change. Jaromir Jagr is struggling through a so-so season. Three teams the Rangers have to face repeatedly -- Buffalo, Pittsburgh and New Jersey -- still are recovering from weak starts and are almost certain to play better.

So, let's not give the Rangers a playoff invitation just yet.

Montreal Canadiens
Most predicted only doom and gloom for the Habs this season, but they have confounded those prognosticators and are fifth in the East.

The Canadiens were the last Canadian team to win the Cup (1993) and have used a blueprint of speed and skill to make themselves a threat again. They also appear to have a burgeoning goaltending star in Carey Price, a big, unflappable netminder who is 5-1-1 in his first seven NHL starts. GM Bob Gainey let star defenseman Sheldon Souray and his booming point shot walk in the offseason, and the Canadiens still have the league's top power play.

No, the Habs don't have a great team, but non-great Montreal teams have won it all before.

There are those who will look at the passing of longtime owner Bill Wirtz this fall as a kind of a turning point for this franchise -- a dark, cynical point of view, to be sure. Truth is, Wirtz oversaw the turnaround in Chicago's circumstances dating back to the start of last season and accelerating with the arrival of young stars Jonathan Toews and Patrick Kane this season. Both look to be the real deal, and Denis Savard has done an admirable job coaching the Blackhawks to use a more attacking, up-tempo game.

You have to wonder about the Hawks' depth, and this is a team that has made the playoffs once in a decade. But Rocky Wirtz, Bill's son, has put Hawks home games on TV and just hired a new club president away from baseball's Chicago Cubs.

A new wind seems to be blowing in the Windy City.

Boston Bruins
The Bruins last won the Cup during the Nixon administration and have won a single playoff series in a decade. They traded away franchise player Joe Thornton and didn't get much in return. Then, the B's found themselves dissatisfied with coach Dave Lewis after just one season and canned him.

This season, Claude Julien, who also was fired after just one season in New Jersey, has arrived to take the coaching reins. Early in the season, the team's best forward, Patrice Bergeron, was taken illegally into the end boards by Philly's Randy Jones, and he might not be back for weeks, if at all this season. Finally, goalie Manny Fernandez was acquired from Minnesota in the offseason to become Boston's new No. 1 netminder, but injuries have limited him to just four appearances.

Yet, through all of this, the B's have put together a tidy record in the early part of this season. Boston beat divisional and conference foe Toronto twice in the past week. Goalie Tim Thomas has been excellent, defenseman Zdeno Chara has looked more like the dominant blue-liner he was in Ottawa and the Bruins have become a hustling, resourceful club that just might be able to sneak into the final Eastern Conference playoff berth next spring.

If the entire Original Six is to get into postseason play, it is the Leafs who most need to turn their season around, and soon.

Before this season began, coach Paul Maurice said this club was the "most talented" he had ever coached and it would contend for the Stanley Cup. Instead, the Leafs have won only eight of their first 24 games and continue to lose valuable points in the shootout, an exercise in which they have failed repeatedly since it was introduced to the NHL.

GM John Ferguson is under the gun after the club missed the playoffs the past two seasons, and while the Leafs have scored well, they are the NHL's worst defensive team. Winger Jason Blake, a free-agent signee from the Islanders, was diagnosed with a form of leukemia early in the season, and while he has played in all the games, he has only two goals after potting 40 last season on Long Island.

Unless the Leafs get going, the 1995-96 season will remain the last time the entire Original Six was still alive when the Stanley Cup playoffs began.

• HENRI RICHARD RATING: One out of five.

Damien Cox, a columnist for The Toronto Star, is a regular contributor to ESPN.com. He is the author of "Brodeur: Beyond The Crease" and "'67: The Maple Leafs, Their Sensational Victory, and the End of an Empire."