DENVER -- This was supposed to be the night they could show off, flaunt their reunion, show the Mighty Ducks of Anaheim they were wrong to take Paul Kariya for granted. 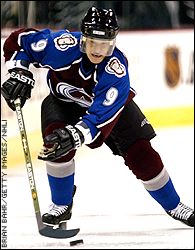 With Joe Sakic skating between them, Kariya and Teemu Selanne would be part of the Colorado Avalanche's dynamic two-line punch and be a buddy saga worthy of Crosby and Hope, Gleason and Carney, Belushi and Aykroyd.

Maybe it still will play out that way, but tonight Kariya will be watching in street clothes as the Ducks, his team for the first nine seasons of his career, face the Avalanche. He also will be hoping his sprained right wrist will prove to be a temporary annoyance, rather than the ruination of the script he envisioned last summer.

"It's really frustrating," Kariya said Monday. "We decided to come here, we were really excited about it, and we wanted to get off to a good start. Injuries are part of the game and you have to deal with them. You never want them to happen. But on the other side of it, if I had a choice, I'd rather have it happen the first quarter of the season than the last.

"I just want to play in any game, but obviously [Tuesday's] game would have been extra special, going against Anaheim. It's disappointing any time you get injured, but it's a fact of life when you play sports, and you have to be smart with it this time and make sure it's strong before I come back."

Through Colorado's first 17 games, Kariya and Selanne have played together in seven. The much-touted top two lines -- also including Peter Forsberg centering Milan Hejduk and Alex Tanguay -- haven't been intact since game five.

Forsberg tonight will miss his seventh game in the Avalanche's last nine, and the issue is whether his problem with groin and stomach muscles will continue to affect him or pop up intermittently all season. The shuffling has put Sakic back between Tanguay and Hejduk, the league's leading scorer and No. 2 goal-scorer, respectively, so it's not as if the top-line production has diminished. It's just that the one-two, pick-your-poison lines haven't been together. Steve Konowalchuk, the early-season pickup from Washington, has been rejuvenated and a major force at both wing and center, and a big help as a penalty killer. But he would be a great third-line winger on this team -- if he ever is allowed to settle into that position.

As excuses, they don't work in the NHL. Look at the Blues and Kings, leading their divisions despite ongoing manpower problems -- both because of injuries and suspensions due to severe cases of brain lock.

Despite a 5-0-1-1 run that has brought it within two points of Vancouver in the Northwest Division, Colorado has looked very ordinary. The Avalanche
have one win (Edmonton) against a team with a winning record, and while David Aebischer has nine victories and two shutouts, he hasn't yet been so compelling to stop Colorado fans from guessing which veteran goaltender Pierre Lacroix will try to acquire as the trading deadline nears.

With Detroit and especially Dallas also falling short of tearing up the league in the first quarter, it's not as if Colorado's mediocrity should be taken as a sign of long-term shakiness. What it means, though, is that this still is a team in search of an identity in the post-Patrick Roy era, and its ongoing injury problems are postponing its opportunities to coalesce.

It's all part of a strange scenario that defies logic in many ways. Kariya came within one victory of holding the Stanley Cup aloft last season, yet when the Ducks didn't give him a qualifying offer to retain his rights and wanted him back for a significant pay cut, he engineered the package deal that brought him to Colorado with Selanne. Despite the Avalanche's long-running success, the fact was this was a team that was eliminated in the first round and saw its peerless goaltender retire. And the $1.2 million he is making this season -- before he again becomes an unrestricted free agent -- is far less than Anaheim would have paid him, and the Ducks were determined to try to bring back Selanne as well.

So it's apparent that Kariya harbored far more resentment over Mike Babcock's close-to-the-vest style and the Ducks' failure to qualify him -- as an issue of respect, rather than money -- than he ever has publicly acknowledged. Having Kariya grouse and provide colorful copy would be like walking up to Goofy inside Disneyland's gates and hearing the guy in the suit say, "@#^%$#, I hate these little &^$#@*!" It isn't going to happen.

Kariya missed 10 games, and then returned to the lineup Thursday at Phoenix. His absence was longer than expected, but it quickly became apparent -- in hindsight -- that he should have waited longer. In the first period of a 3-0 Colorado victory over Dallas on Saturday night, Kariya reinjured his wrist.

"I was going in to forecheck one of the defensemen, and I lifted up his stick and kind of tweaked my wrist," Kariya said. "It stung and throbbed a little bit, but when you have an injury like this you're going to get that. Most of the times it goes away. It wasn't going away. I was a little bit concerned about it. I said I'd go through the period and we'll look at it inbetween. The last shift of the period, I went into the boards with [Brenden] Morrow and I had to clear the puck. I lifted the puck out and he kind of hit me at the same time, and I kind of exposed my wrist. It was the exact same thing, my wrist went back. It was the exact same thing I had the first time."

How long will he be out this time?

"Well, I think we are going to take a good approach to it this time, maybe take a little bit more time with it," Kariya said. "I don't think I'll have a problem with it. Hopefully, there's nothing else wrong with it. It felt strong, it felt good in practice, but with these type of injuries, it's hard to test when you're going to be in battling situations in the corners grinding it out, and you don't know it's going to react. I tried my best and it didn't work, so we'll go back to the start and get it strong again."

When the top six all were healthy in the first two weeks, the Avalanche were 2-3, but the signs of promise were there -- including the flashes from the Sakic-Kariya-Selanne line.

"We really haven't had a lot of time [together]," Sakic said with a laugh Monday. "Obviously, you need time and Paul's been out. When he comes back healthy, it's going to be great. We're hoping that everyone can be healthy down the stretch, and we can really crank it up."

Karyia said that in his return to the lineup last week, he "just felt fantastic on the ice and things were clicking, with a lot of scoring opportunities. We both felt great. Teemu had the knee problem earlier in the year, and I think is the best he's skated in five, six years. He was flying out there. We were looking forward to picking it up, and getting that magic back. But I guess it'll have to wait."

Selanne missed one game with a sore knee, and he has four goals in 16 games.

"Even in the first five games, we weren't getting many goals, but we knew it was ALMOST starting to click," Selanne said. "Right now, same thing in the Dallas game. In the first period, we had all kinds of chances and we were flying again. And then Paul was hurt again."