Last season, the Carolina Hurricanes not only got away with riding the fluctuating fortunes of two goalies in the playoffs, but they also won the Stanley Cup and saw Cam Ward handed the Conn Smythe Trophy.

Rod Brind'Amour or Chris Pronger would have been better Smythe choices. But Ward, Martin Gerber's backup in the regular season, was staunch at opportune times, and the skids were greased for Gerber's offseason signing with the Senators.

There were moments when it wasn't out of line to argue that goaltending, while still crucial, wasn't quite as important in the playoffs as in previous years.

(That's my story and I'm sticking to it.)

The latest edition of the NHL playoffs is approaching. The field is beginning to crystallize without the aid of terms such as "bubble," "strength of schedule," "quality wins," and "RPI," or an annual whining that if 11 Atlantic Coast Conference teams don't make it, the tournament is a travesty. As many as 13 of the 16 teams seem set.

Here's a look at how the playoff goaltending shapes up, taking into consideration the 19 teams (realistically) still in the running. Disclaimers: (A) Prioritizing playoff goaltending situations isn't necessarily the same thing as rating the goaltenders themselves, or rating the teams' playoff chances; (B) playoff experience comes into play; and (C) offer void where prohibited.

1. New Jersey Devils
They probably should be holding down spots 1, 2 and 3 to match the number of times New Jersey has won the Stanley Cup with Martin Brodeur in the net. (Quick: How many times has he won the Smythe?) He's an ironman, physically resilient, has a short memory and is capable of getting into the heads of opponents as a series goes along. All factors are crucial. As much as ever.

2. Anaheim Ducks
Not only are the Ducks back on track, not only will they be able to withstand the temporary loss (again) of Pronger, but they have an ideal situation. Both Jean-Sebastien Giguere and Ilya Bryzgalov have been terrific in the playoffs; Bryzgalov, at least, for that amazing short-term run last postseason, and Giguere seems back on track. The Ducks have settled on him as their unquestioned No. 1 (or their playoff goalie), but the fallback has a significant postseason résumé as well.

3. Calgary Flames
I'm still scratching my head about this team, waiting for the rally that catapults the Flames to the top of the Northwest and enables them to pull away. But Calgary will be in the postseason, and despite the Flames' first-round failure last season, Miikka Kiprusoff has proven he can lift a team in the postseason, as well as in November.

4. Vancouver Canucks
This goes against my instincts, because as great as Roberto Luongo has been, his NHL playoff record is 0-0. A blank page. But there isn't a negative here, either. (See: Turco, Marty.) Although it's only a minor issue, he was terrific in Quebec Major Junior Hockey League playoff runs. More important, his work this season with the Canucks has confirmed what seemed to be evident when he was at Florida. He can take a team on his back and say, "Here we go, guys  " Yet, until he does it in the playoffs

5. Detroit Red Wings
OK, Dominik Hasek is 42. He's also fragile and nagged by injuries. He has been terrific when able to stay in the lineup the past two seasons, and although his latest problem is a thigh injury, it's not considered serious. And here's where I admit to being off in a corner: Once a goalie has been just good enough to be able to raise the Stanley Cup while sweat-drenched, as Chris Osgood has been (albeit nine years ago), he can't be ruled out as a capable stand-in for Hasek. Plus, if the Red Wings have the puck 82 percent of the time, which is what they tend to do, that burden of responsibility is a little less heavy.

6. Buffalo Sabres
Ryan Miller was up and down in the 2006 playoffs, but he was good enough to help get the Sabres within one victory of the Cup finals in his first full NHL season. He has improved overall in 2006-07 and has a better team around him. The Martin Biron safety net is gone, but that's probably not an issue, anyway. (I still don't like their uniforms.)

7. Carolina Hurricanes
The Smythe, however debatable, and a championship shove Ward and his team up the ladder. John Grahame has had at least one great playoff game, though the rest of his record is shaky. Of course, this is all academic if the Hurricanes don't make the playoffs.

8. San Jose Sharks
Vesa Toskala's groin injury helped bring an end to the alternating act of Toskala and Evgeni Nabokov, who has three shutouts in his past seven starts. The Sharks needed to settle on a No. 1, play him down the stretch and set the stage. They have done that, and they're better off. But a Toskala return to health would give them that wild card of having a trusted alternative.

9. Nashville Predators
They'd be lower if the Predators were still showing signs of seriously considering going with Chris Mason as their top playoff goalie. Tomas Vokoun is back from a finger injury and seems to be settling back into the No. 1 job. And despite Mason's surprisingly strong play, Vokoun gives Nashville its best shot. His playoff experience is limited to the stirring series against the Red Wings three years ago, but he was good, while Mason wasn't against San Jose last season when Vokoun was out with the blood clot problems.

10. Dallas Stars
Ah, that albatross. The monkey on the back. The accusations of Heimlich prowess. Whatever you want to call it, Marty Turco still has it hanging over him. And until he proves that his regular-season work doesn't become irrelevant once the postseason starts, he doesn't deserve to be any higher than this. At least he has won the job back from Mike Smith, who is neither the former general manager nor Kentucky Derby winner Giacomo's jockey.

11. New York Islanders
Rick DiPietro is only 1-4 in the postseason, but he has the security of knowing his contract runs through 2101-02. With an improving team that will be on an upswing if it makes the playoffs, he is capable of stealing a game or two or more.

12. Ottawa Senators
Who do you choose: Ray Emery, the playoff goalie in Hasek's absence last season, or Gerber? Either way, the data is limited, but it would help if one of the two jumps up in the final month and seems primed to be the go-to guy.

13. Toronto Maple Leafs
At least Andrew Raycroft is the unquestioned No. 1; everybody knows it, and the Bruins' first-round collapse against Montreal in 2004 wasn't his fault. Now the Leafs just have to get there.

14. Montreal Canadiens
Several issues are involved, including the possibility that even if Cristobal Huet (out after hamstring surgery) is healthy enough to play by the start of the playoffs, he might not be sharp. Plus, the Canadiens have to make the playoffs. But if they do, it will mean David Aebischer or Jaroslav Halak played well down the stretch. At least Aebischer had a decent playoff run with Colorado three years ago.

15. Minnesota Wild
It's just the uncertainty. This is the team that in effect picked Manny Fernandez over Dwayne Roloson, but now Niklas Backstrom seems destined to be in net for the postseason. The latest soap opera began when Fernandez suffered a knee injury, but he's now healthy again. I'd actually have them higher if they seemed to be leaning toward Fernandez instead. 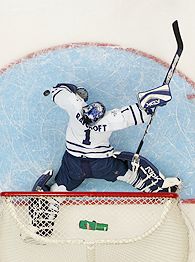 16. Pittsburgh Penguins
Overall, the Penguins have been a great story, and it's not as if they win by battening down the hatches and preventing the goalie from being under siege. But Marc-Andre Fleury's recent benching added some drama, and although he's gotten back into a rotation with Jocelyn Thibault, none of that is particularly encouraging. Pittsburgh might advance far, but it probably won't be because of the goaltending.

17. Atlanta Thrashers
Kari Lehtonen seems back in a groove, and coach Bob Hartley sells him as the second coming of Kiprusoff, but he's young and untested in the postseason. Absolutely, guys like him can prove to be stunningly good when the white-hot spotlight of the postseason turns on, but until that happens

18. Tampa Bay Lightning
Marc Denis has been a thunderous disappointment; at least he's playing some, which is more than you can say for Jose Theodore. But I still think he's capable of a prime-time performance in his first playoff appearance if he gets the nod ahead of Johan Holmqvist.

19. New York Rangers
This isn't a knock on Henrik Lundqvist as much as it is an acknowledgment that the Rangers are the longest shot of this group to even make the playoffs. But he, indeed, was terrible in the first round last season.

All that said, one of the great things about the NHL playoffs is a goalie, who, whether previously shaky or untested under heightened pressures, can exceed all expectations.