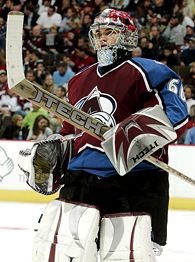 (In hockey, where it's always been appropriate to ask, "Who owns the Chiefs?" We also now can add this: "Who owns the Predators, and where will they be in 2008-09?")

When the buyout window recently opened, the Islanders made the difficult, but unavoidable and wise, decision to buy out the final four seasons on Alexei Yashin's 10-year deal, meaning he most likely will appear on the cap list for the next eight seasons, at $2.2 million a year. Understandably and wisely, though, the Isles did not buy out the final 31 seasons of Rick DiPietro's contract and are hoping to be able to re-sign Ryan Smyth to turn that trade from a rental into a commitment.

In Colorado, the decision so far has been to do nothing about the one season remaining on Jose Theodore's deal -- except try to make the best of it.

It wouldn't be an absolute shock if that picture changes in the next week as the Avalanche assess the landscape heading into the free-agency period; but, at this point, the safest bet is Theodore remains with Colorado and the franchise remains on the hook for his entire $6 million salary (with a cap number of $5.33 million) for next season. If the Avs do change course, the two-thirds buyout hit could be spread over two seasons.

A few months ago, a Theodore buyout seemed inevitable. Peter Budaj supplanted Theodore as the No. 1 goalie; Joel Quenneville had no faith in the former Hart Trophy winner, and the possibility of having a backup making $6 million while Budaj pulled down $700,000 next season seemed outlandish. But here's what changed: Theodore showed signs of "getting it." He worked hard, he wasn't a cancer and said all the right things about wanting to be ready if another opportunity arose. Unless the Avalanche get disquieting intelligence from sources in Montreal or elsewhere indicating Theodore won't be in shape or have a reasonably positive attitude heading into the season, he'll be back.

The cap savings wouldn't be that great, the Avalanche could be completely rid of the contract after this season, and there always is the hope in the front office that on the north side of 30, Theodore could somehow get it turned around in the era of scaled-down gear and turn the 2005 trade into something other than a disaster.

Ottawa, though, under new general manager Bryan Murray, should go the opposite route, buying out Martin Gerber and further committing to Ray Emery. That's a different enough situation, in part because Gerber has two years remaining on his deal and Emery can become a restricted free agent on July 1. He isn't going anywhere, of course, but he could go to arbitration and having Gerber still under contract would nudge the bar higher if it came to that. Emery's minor wrist surgery could make the Sens a bit squeamish about cutting Gerber loose, but Emery is expected to be fine by training camp.

In Columbus, one of the first decisions of new GM Scott Howson should be to buy out Sergei Fedorov.

In Buffalo, it still seems to be coming down to the either/or dilemma of Daniel Briere or Chris Drury, assuming both would be amenable to sticking with the Sabres. Briere's salary precedent -- the $5 million he made last season after an arbitration award -- is higher, but Drury's going to at least get in that area. All things being equal, if I were in the Sabres' front office, I'd be going the hardest after Briere. Drury has so many potential tugs coming from so many directions, including his childhood affinity for the Rangers; his offseason home in Manhattan Beach, Calif., which makes the Kings a viable contender if he is convinced the rebuilding is on track; Colorado's possible determination to make another run at him; and even San Jose's less-than-secret long look at going after him.

Then you look at a player like Scott Gomez. How much of a difference-maker is he? He's determined to test the market, and that makes perfect sense; but the Devils center still hasn't shown he's more than a nice contributor on a decent team. In this era of bang-for-the-buck standards being more important than ever, throwing a compelling package at him is risky in every sense of the word. If anybody blows away everyone else with an offer to Gomez, that will be the type of deal that has us debating the buyout issue down the road.

Sheldon Souray, while obviously one of the better defensemen in the league and coming off that remarkable 26-goal contract season, presents similar dilemmas. He's going to be looking for offers befitting a "cornerstone," whether from the Canadiens or anyone else after July 1. As well as he has done in Montreal, that still represents a bit of a leap of faith, both about his ongoing effectiveness at both ends of the ice and his ability to stay healthy.

As that soap opera continues to play out down in Nashville (with a lame-duck season most likely on the horizon), GM David Poile is trying to make the best of it. Witness his unloading of Scott Hartnell and Kimmo Timonen to the Flyers, who immediately signed both players to new deals. So do you position yourself for runs at Paul Kariya and Peter Forsberg?

The answers all will make for an interesting next few weeks.