This is being written several hours before Thursday afternoon's announcement of the Hockey Hall of Fame's four-man induction class for 2007.

The selection committee is going to get it right.

They're going to get it right because any four-man combination imaginable -- unless the selectors suddenly developed an affinity for Tommy Salo or decides to annually include one long-retired and previously overlooked player as a tribute to tradition -- is defensible.

There are at least seven men eligible this time around, most of them for the first time, who belong in the Hall and will get the call someday. 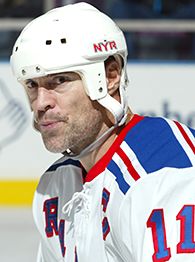 The toughest question isn't always whom do you leave out. This year, it certainly is.

The group represents two no-brainer picks; one acknowledgment that the shrine in lower level of the Toronto office and shopping complex is the Hockey Hall of Fame and not the NHL Hall of Fame; and one long-overdue choice.

The toughest omissions would be Scott Stevens and Al MacInnis, and there are reasonable arguments, whether for this year's or subsequent classes, to be made for Pavel Bure, Adam Oates, Dino Ciccarelli, Phil Housley, Doug Gilmour, and Claude Lemieux. And maybe even Tom Barrasso, whose cactus-needle demeanor shouldn't be allowed to diminish his accomplishments.

Messier and Francis are so automatic, there's not much sense going over their résumés and advancing arguments. They were inspirational, great players, providing further evidence that there is no one model for leadership. They were winners; and although both hung on a year or two too long -- at least in the competitive sense -- that didn't tarnish their legacies or reputations.

After that, it gets a bit dicey.

My own debate mainly came down to selecting two players among Anderson, Larionov, Stevens, MacInnis and Oates.

I shoved Anderson to the front of the line for many reasons. First and foremost, he belongs in the Hall. But part of this is a reaction to some of the perceptions that can pick up steam every year he isn't selected and new candidates become eligible. It's human nature to at least subliminally think that, well, if he isn't in yet, maybe he doesn't deserve to be. Laugh at that, if you will, and say it gives the selectors too little credit. They certainly know who Anderson is, understand he was a terrific player and a key element of the dynastic Oilers teams, and it's not as if they're trashing him if they leave him out of the Hall. But to downplay his accomplishments because of the cast around him is unfair. The anti-Oilers backlash isn't a backlash in the sense of belittling what those teams accomplished, but now there's this almost a required backlash kicking in.

As in: Who's next? Lee Fogolin? Why not just put Charlie Huddy in, too?

Anderson was known primarily as a goal-scorer with an edge to his game who didn't quite get to 500 career goals. That's been considered a demerit. The arbitrariness of that standard is silly, especially since Anderson was only two short. This shouldn't be a problem.

He should get in. This year. That means someone else will have to be disappointed for a year or two, but that's the way it should be.

Who are your picks?

The Hockey Hall of Fame has a tough decision for its 2007 class. So, who would you choose? Pick your final four here.
Vote: SportsNation

Larionov is one of the true gentlemen of sport, and, yes, that should be a consideration as well. At one time, long before he came to the NHL, he was one of the top handful of players in the world, especially when he was playing on the "KLM Line," chafing at Soviet constraints. It's interesting to ponder what might have been if he had come to the NHL sooner than age 28. His NHL career alone is not Hall of Fame-worthy; his entire body of work is. If he is considered another symbol for how the changing geopolitics and crumbling of walls -- real and symbolic -- made the NHL better, there's nothing wrong with that.

Someone has just shoved a soapbox into the picture, and I am going to stand on it for a second. I know the modern fashion is to get revved up in "either-or" sports arguments of this era, to yell and scream or pound the keys, all on the premise, whether acknowledged or not, that if you say Howe, you're trashing Hull. (Or if you say Mays, you're trashing Mantle.)

So to it make clear: If I took the dog for a walk around the block, I might be able to talk myself into Stevens, MacInnis, or Oates ahead of Anderson and especially Larionov.

That is not an admission of weakness or indecisiveness. And that's why the selectors had an especially tough job this year.

Oates' selection would be a victory for the craftsmen, the unselfish, the somewhat unsung. Four figures in career assists? And mostly with his adroitness rather than through rebounds? With skill that had the goal-scorer often saying in the dressing room later that Oates did all the work.

With Stevens, it's obvious the selectors should keep their heads up if they leave him out this time.

But you get the point. Captain, leader, physical force, yeoman work in front of Martin Brodeur, winner.

And MacInnis? There was a lot more to his game than that awe-inspiring -- and awe-inspiring even when you saw it for the 1,324th time -- slap shot.

Some great players, truly Hall-worthy players, are going to have to wait.