Early last season, I sat down for a chat with Eric Lindros and then wrote a column saying I not only hoped he would be rejuvenated with the Stars, but that I thought he would be.

He wasn't. Not even close.

I should have saved the e-mails, not all of which cited or came from Sault Ste. Marie and Quebec, the places he spurned. Frankly, the level of venom in many of them surprised me. 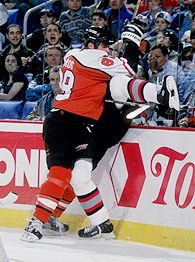 At the time, I thought Lindros had grown up, and it's not ignoring history to hope a player with a world of talent can stay healthy enough to display it on the international stage awhile longer.

A year later, with Lindros not on a preseason roster and spending much of his time on NHL Players' Association business, it's difficult to imagine a scenario under which any NHL team would give him another chance this season in the wake of his largely unsuccessful stints with Toronto (2005-06) and Dallas (last season).

Lindros isn't worth the risk, the faith, or the money -- especially since he isn't old enough for an incentive- and condition-laden deal.

Even that seems jarring. After all he's been through, as long as he's been around, as he goes through a limbo both similar and dissimilar to (appropriately enough) Peter Forsberg's, Lindros still is only 34.

If both players remain off the ice this season, and in the wake of Mike Ricci's retirement, the suspended Chris Simon will be the final player directly involved in the 1992 megadeal between the Flyers and Nordiques to be active in the NHL.

Brendan Shanahan has had many more laps around the rink.

This isn't a matter of mustering sympathy for the guy. He's made a lot of money, wedged in 760 regular-season games and scored 372 goals.

But there will be the legacy of perhaps being the most -- on balance -- underachieving and star-crossed Hart Trophy winner in the history of the NHL. Or maybe the best "bust" ever. In fact, call him the "greatest bust" the NHL has ever seen, and that works on several levels, including as a backhanded compliment.

Doesn't it seem even more mystifying now that Lindros was Canada's 1998 Olympic captain, thanks largely to Bobby Clarke's agenda, than it did at the time?