A lot of the discussion about the Jack Adams Award tends to focus on the coaches whose teams have done better in the regular season than expected -- or, for whatever reasons, better than most believe they had a right to do. 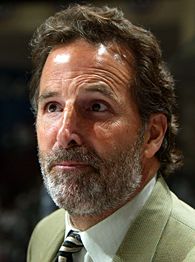 There's nothing wrong with that. It even makes a lot of sense.

The NHL Broadcasters' Association votes on the award, and of the past 10 winners, only Tampa Bay's John Tortorella in 2004 and St. Louis' Joel Quenneville in 2000 coached Presidents' Trophy winners.

In those cases, Quenneville's Blues improved 27 points from the season before, Tortorella's Lightning 13 points. So it's fair to say neither team, including the Lightning's eventual Stanley Cup champions, was considered a powerhouse going in with a coach whose mandate was not to foul up a good thing.

Coaches of highly regarded teams, and even teams with high point totals, don't get the credit they deserve. Sure, nobody's making fun of them or trashing them, but it's almost as if we -- and that's a generic term that includes broadcasters -- tend to believe if guys with deep rosters have gotten a big enough break, why not give the acclamation to a coach who (we think, at least) had less to work with.

Despite that, there have been times when I've seen a team still in playoff contention and walked away shaking my head, thinking the guy behind the bench automatically should be an Adams finalist for having that bunch doing anything but planning weeklong golf junkets for the first week of the playoffs.

There aren't, and shouldn't be, any hard and fast rules for what makes a good candidate for coach of the year -- and, in fact, I'm not sure the voters shouldn't be even more open-minded in measuring the impact of a specific coach. You can be doing a great job with a 76-point team under the right circumstances, and you can be doing a great job to keep a talented team and savvy organization on track. And then it comes down to a gut feeling.

Who's doing the best job?

With all that in mind -- that there is no magic formula and no "right" approach, perhaps as much with this award as any other, plus the concession that what happens in the next 12 days should affect judgments -- here's a rundown of those who, in my book (and in a lot of others), deserve the most consideration this season.

He might seem to be the "hasn't-fouled-it-up" candidate, but that doesn't do justice to the challenges Babcock has faced, including Dominik Hasek's unreliability (at least on the health front) and Chris Osgood coming back to earth, and the period without Chris Chelios, Brian Rafalski and Nicklas Lidstrom. Other coaches wish they had Babcock's "challenges" and the Wings' talent -- no question, this is the most resilient organization in the wake of the cap's implementation -- but Babcock has been adaptive and deft in guiding this roster to the brink of another Presidents' Trophy win.

This is a triumph for the good guys who plug along as organization men and minor league coaches, wondering during the recycling process what the heck they have to do to get an NHL shot. Mostly a minor league journeyman player and then a minor league coach (including in the ECHL) for over a decade, Boudreau has paid more dues than a lifetime teamster at retirement.

As of this writing, the Capitals are 31-17-7 since Boudreau took over for Glen Hanlon on Nov. 22. A lot of that has to do with Alexander Ovechkin's ascension, but look around and note the talented players who aren't allowed enough freedom to be this electrifying. Boudreau has been the right man, in the right place, at the right time -- and that's a compliment. Even if the Caps fall short of making the playoffs, that doesn't diminish Boudreau's work.

Where'd this come from? Alexei Kovalev is paying attention and playing hard, and it's not even a contract year for him. But otherwise, this seemed a team that was doing well just to hang in there, and now it's doing more, after taking the risk of trading goalie Cristobal Huet and showing complete faith in Carey Price. Carbonneau has punched the right buttons in bringing it all, including taking advantage of scoring balance, together.

They're a two-man ticket here because their situations are so similar. MacTavish has an Oilers team that has persevered through an injury run that went beyond the injury run most teams have. Also, because of the defections, the Oilers by all rights should be deeper into the Northwest Division cellar than they are now and completely out of the hunt for a playoff spot. Just as significant, they could be mailing it in rather than getting games to overtime and often pulling them out. If they catch Colorado, Calgary or Vancouver and make the postseason? It should be MacTavish's trophy  by acclamation.

Same with Trotz, the only coach the Dallas Cowboys  er, Predators have ever had. While the Preds have slipped this season, it's remarkable given the tumultuous circumstances -- ownership soap opera, once-imminent prospective shift to Hamilton, Ontario -- that this team is as competitive as it is.

Regardless of how the stretch run plays out, voting for either one is already defensible.

At least we know that Lou Lamoriello isn't going to oust his coach on the verge of the playoffs this time.We do, don't we? Well, maybe not. As easy as it is to take shots like that, the Devils' organizational resilience is praiseworthy, and Lamoriello deserves the credit for that. And, in a sense, it's even more impressive than the Red Wings' regular-season consistency because the Devils keep watching elite guys leave  and plugging in others. But especially in the wake of a marathon road trip to open the season as the final touches were put on the Prudential Center, Sutter has had the right touch here.

Wilson's friction with Patrick Marleau and the Sharks' 7-7-2 start, among other issues, had the coach seemingly destined to be fired by Christmas  if not sooner. The pieces about his voice getting stale to the Sharks' veterans -- that's one of the story angles taught in Sportswriting and Sports Broadcasting 101 -- were being cranked out. A five-game losing streak as the trading deadline approached heightened the urgency. Then Brian Campbell's acquisition helped set the table for the run that has the Sharks on the verge of clinching the Pacific Division and the Western Conference's No. 2 seed. Wilson didn't ridiculously overreact, and the Sharks rebounded.

It wasn't that long ago that Dallas' Dave Tippett would have made this list, but the Stars' late-season struggles and the Sharks' run have juggled the picture. Claude Julien deserved all the praise he was getting for the Bruins' surprising season, but now it's not even certain they'll hang on to the No. 8 spot. As galling as the Wild (still) can be stylistically, Minnesota winning the Northwest Division would be another tribute to Jacques Lemaire. So I'm sticking with that list of candidates -- five coaches, plus one and/or tandem -- to consider before paring to the final three.

If a coach of the year choice had to be made now -- roughly akin to the press box czars insisting on having the three-star choices with five minutes remaining in regulation -- I'd take Carbonneau.

Terry Frei is a regular contributor to ESPN.com. He is the author of the just-released "'77" and "Third Down and a War to Go."