It's neither shocking nor surprising now when a coach gets fired in the National Hockey League.

The Washington Capitals were in last place with an 8-18-1-1 record under Bruce Cassidy, a coach who couldn't maximize the talents of superstar forward Jaromir Jagr and went so far over the top in a recent rant in the media that he had to apologize to the entire team. 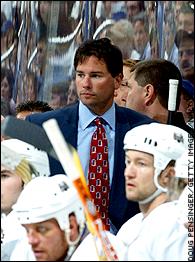 So when Cassidy got axed Wednesday, the only real question was, what took so long?

There are two answers: money and pride.

"This is not about Jaromir Jagr," Capitals general manager George McPhee told ESPN.com Wednesday. "I have no problems with the way Jaromir has been playing for the past two months. This was just something where our team had spiraled down to a point where I felt I had to step in."

Money is the easy part to understand.

While the Capitals had some success under Cassidy, who was hired in June 2002, management initially believed many of the team's problems were not of his making, including some communication problems with Jagr and a seriously weakened defense. Things began to change last season after Cassidy's falling-out with veteran defenseman Calle Johansson during the playoffs. That was a precursor to more heated disagreements with Jagr and then last week's rant. After the Caps were outshot 41-9 in a 3-0 loss to the New Jersey Devils, Cassidy incorporated players' personal lives and their family situations in his on-ice complaints, a no-no in the hockey world and an action for which he was forced to apologize.

Before the tirade, Capitals management was hoping to get through the season with Cassidy. After all, what was the point of firing a coach the year before a potential lockout season? With a work stoppage looming, firing a coach this season means eating his salary and signing a new coach to a contract that includes a season he likely won't have to work. That all changed after it became clear that Cassidy, who had never before coached in the NHL, had lost the team.

The pride in question is McPhee's. Hiring Cassidy, the American Hockey League's coach of the year in 2002, was a major risk because of his lack of NHL experience. However, because the Capitals had waited so long to fire Ron Wilson, Cassidy and Glen Hanlon were the only attractive candidates available. Hanlon, who replaces Cassidy after serving as his assistant, apparently lost out in the interview process.

Initially, it looked as if hiring Cassidy would work. He was 39-29-8-6 in his first season and came within one win of capturing the Southeast Division title, before losing to the Tampa Bay Lightning in the first round of the playoffs 4-2 after winning the first two games. Considering the team missed the playoffs the season before, it all seemed to validate Cassidy's credentials.

General managers last a lot longer than coaches in the NHL, but they get only a couple of kicks at canning a coach before they have to pay for the decisions as well. McPhee now has two coaching strikes against him. With only a handful of exceptions, general mangers rarely get more than three.

Firing Cassidy shouldn't be construed as management backing a player over a coach. A source close to the team told ESPN.com on Wednesday that the firing and the much-rumored possible trade of Jagr should be viewed as separate situations.

Cassidy was fired because he didn't lose one player; he lost all of them. Once that happens, a coach is finished. Last Thursday's rant guaranteed that.

Meanwhile, the Capitals can afford to wait for the right time to deal Jagr. If a trade happens, it will revolve solely around money -- how much the Caps have to eat of the four years and $44 million remaining on Jagr's contract, and what they might get in return.

According to McPhee, Jagr has been playing as well or better during the last two months than at any other time since he's been in Washington. Under Hanlon, it's at least conceivable that he could play better and the team would rise with him. Under those circumstances, the Caps could keep Jagr. If they don't, he becomes -- at the very least -- an easier player to trade.

Cassidy was just the opposite; management couldn't wait any longer.

Jim Kelley is the NHL writer for ESPN.com. Submit questions or comments to his mail bag.