It doesn't seem all that long ago, but on Jan. 6, the Tampa Bay Lightning were four points behind the Atlanta Thrashers in the race for first place in the NHL's Southeast Division. 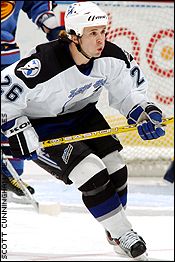 This morning, the Lightning lead the division by 16 points. After tonight, it could well be 18.

After taking advantage of a major melt down by the Thrashers, who've since been eclipsed by the Florida Panthers, the Lightning are so far out in front of their division that the other top teams in the Eastern Conference are in their sight.

"At the beginning of the year the goal was to make the playoffs and to finish first in our division," said center Vincent Lecavalier. "Now it's to catch up for second or even first (in the conference). The way we're playing right now, you never know."

The Lightning host the East-leading Philadelphia Flyers this evening, a tough test even without Jeremy Roenick and Keith Primeau in the lineup. But the Lightning have beaten a lot of tough opponents this season, including their schedule. After starting the season playing a league-low 17 games through Nov. 23, the Lightning played 37 games in 72 days heading into the All-Star break, including seven pairs of back-to-back games and two five-game road trips. They not only survived with a 17-15-3-2 record, but they've picked up momentum with a 8-1-1-0 record in their last 10 games.

In the immortal words of Al Davis, these guys just win baby. They win at home (15-7-4-2) and they win on the road (15-10-3-1). They don't score goals like the elite offensive teams, but they do rank a respectable eighth with 2.79 goals per game. Perhaps more importantly, they have enough snipers to score when a goal is needed most. And because they prevent goals as well as any team in the league (they rank ninth with 2.25 goals against), their .54 goal differential trails only five other teams -- Ottawa, Colorado, Detroit, Philadelphia and Vancouver.

They have a solid power play, strong penalty killing, excellent goaltending and demanding yet well-rounded coaching from a staff that also knows how to teach.

In short, the Lightning are a darn fine hockey club -- not just in the Southeast Division or even the Eastern Conference. They are a team that competes with the best in the league, home and away, in a tight game or a shootout.

However, the improvement from surprise team of a season ago to elite status in the NHL today didn't happen overnight.

Head coach John Tortorella and associate Craig Ramsay, both considered excellent teachers, have created a blend of toughness and understanding. Players get the ice time they deserve and if there is a problem, they confront it head on. And the more the players get to know the coaches and their expectations, the fewer incidents arise.

Such was the case between Tortorella and goaltender Nikolai Khabibulin. During their conference semifinal series against New Jersey, Tortorella tested the goalie by benching him for Game 5. Khabibulin didn't object, partially because he didn't realize that was expected. After the Lightning lost 2-1 in triple overtime and were eliminated from the playoffs, trade rumors immediately began. But after an offseason sitdown, and despite an occasional flare-up, Khabibulin still is the Bolts No. 1 goalie and combines with John Grahame to form perhaps the best one-two punch in the league.

Credit also goes to general manager Jay Feaster, who has tweaked the ingredients of the formula first built by Rick Dudley.

The acquisition of defenseman Darryl Sydor, from the Columbus Blue Jackets, give the Lightning the experience and quality depth they needed. A veteran with a Stanley Cup ring to his credit, Sydor steadies a young unit that has a mix of toughness and skill, and runs eight deep with Jassen Cullimore, Pavel Kubina, Cory Sarich, Dan Boyle, Brad Lukowich, Darren Rumble and Nolan Pratt. Boyle, Kubina and Sydor can all create offense (25, 23 and 19 points respectively). Lukowich and Sarich are sound two-way defensemen and Cullimore (and Pratt and Rumble when they play) can handle the physical side of things.

The addition of Sydor was minor tweaking compared to the transformation among the forward ranks where Lecavalier, long a reluctant subscriber to Tortorella and Ramsay's lessons, suddenly is leading the way.

Lecavalier, tagged as the Michael Jordan of hockey when he was picked first overall in the 1998 draft, has 17 points (seven goals, 10 assists) in his last 11 games and was selected as the NHL's offensive player of the week for a 4-3-7 performance in three games. But it hasn't been a run-of-the-mill stretch for the sixth-year pro. His plus-13 since the 11-game span began is what matters most to the Lightning. Lecavalier's commitment to defense -- or lack thereof at times -- is what usually accounts for his sometimes torturous relationship with Tortorella.

Even in his last "attaboy" for Lecavalier, Tortorella took pains to note that two-way commitment is something that has to be drilled into his star center on a nightly basis.

"He's a huge part of the club when he's playing consistently," Tortorella said. "The last little while he has been very consistent and look what our hockey team is doing."

Lecavalier doesn't work alone, however. He plays on a line with Martin St. Louis and Ruslan Fedotenko, who was acquired in an eyebrow-raising trade that sent the No. 4 pick overall in the 2002 draft to Philadelphia. The trio is as explosive as any line in the NHL today.

St. Louis leads the team in goals (28), assists (35) and points (63), and is a legitimate candidate for the Hart Trophy. He is on pace to break his career best marks of 33 goals and 70 points, set last season, and sits in fourth place overall on the league scoring charts. St. Louis is also a key element on the power play and penalty-killing units. He scored his league-leading seventh short-handed goal in a 3-2 win Saturday vs. arch rival Florida and he leads the NHL with nine short-handed points. Fedotenko is a bit more defensive minded, but the left winger has chipped in 11 goals and 12 assists.

Where the Lightning might have been viewed as a one-line team in the past, that's not the case today.

Cory Stillman is second on the team in scoring with 16 goals and 33 assists, and, after a slow start by his standards, Brad Richards is rebounding as a sniper with 16 goals and 31 assists. Throw in Fredrik Modin (17 goals, 18 assists) and veteran captain Dave Andreychuk (11 goals, 12 assists) and the chances of beating the Lightning grow slim indeed.

Things have gone so well for the Lightning that ownership offered contract extensions to Feaster and the entire coaching staff. That's a ringing vote of confidence for Tortorella, who was in the last year of his deal, and, given his numerous clashes with Lecavalier, might have opted to look elsewhere after this season. The same could be said for Ramsay, who was thought to be on Dudley's short list of coaching candidates come season's end.

Despite all the pluses, Tortorella takes nothing for granted.

And as Lecavalier said, you never know.

Jim Kelley is the NHL writer for ESPN.com. Submit questions or comments to his mail bag.