Well, if you're a Nashville Predators fan, you might not be feeling too good right about now.

Losing a goalie is a tough thing to deal with right before the playoffs, but the team is still making it to the "second season." Buckle up as the field tightens up the next few days!

One scary thought for the opposition is how well Steve Yzerman is playing right now. The Detroit Red Wings captain helped his team lock up the Presidents' Trophy this week, and we haven't seen Yzerman play this well in a while. I think he's finally healthy and has finally pulled everything together in his game (remember, he has had some major surgeries and major knee injuries).

Yzerman is one of the smartest hockey players I've ever seen. I think every hockey fan wants to see Stevie Y carry the Stanley Cup in June in what could be his last NHL game. Will he return next season regardless? I don't know. But the fan in me hopes not, only because I don't want to see Yzerman face a Dave Andreychuk kind of situation where he's put on waivers. Ray Bourque had the best exit, carrying the Cup on this way out. Any of us would love to have that ending on our résumé.

Another player going out on his own terms is Luc Robitaille. He is certainly not going out the way he'd like to; he'd like to go out making a run for the Stanley Cup. We'd all like to plan our retirement perfectly, but at least Robitaille is taking control of the situation and choosing how he leaves.

It has not been a great season for Robitaille -- he has battled for more ice time and has been a healthy scratch more than once. But the coaching staff isn't keeping him out of the lineup because it doesn't like him. I think Luc realized it was time to leave the game, and he could leave wearing a Kings jersey. It was a classic way to go out. I'll remember "Lucky" as an unbelievable ambassador for the game and one of the best scorers we've seen.

Speaking of scoring goals, how about all the 50-goal scorers this season? Alexander Ovechkin is on the cusp, and Jonathan Cheechoo, Jaromir Jagr and Ilya Kovalchuk have hit the plateau. The last season we had, there were no 50-goal scorers. It shows everyone the new rules are working, and the game is more exciting for it.

This week's shout-out goes to Keith Primeau, who skated for the first time this week. Now, he won't play again unless he has a string of painless days and the doctors clear him, but this is good news for Primeau.

A few months ago, we thought Thrashers GM Don Waddell was nuts, pulling a Knute Rockne and predicting Atlanta would make the playoffs. The Thrashers went on to play themselves into a postseason spot but then hit a wall. Now, they have dropped out of the playoff picture. 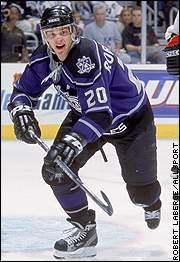 The only way Waddell's prediction will come true is if the team wins its last four games and gets a few favors from the teams above it in the standings. I don't know why this happened to the Thrashers. Everyone was competing; players like Marc Savard and Kovalchuk were storming up the scoring list; and the team overcame huge goaltending woes. Now, for all intents and purposes, the Thrashers are out of the playoffs. There's no reason for it. They proved they were a good team. It's one of my big disappointments the past few weeks.

Toronto and Vancouver have also been a letdown.

Look, we all knew before the season started that there were huge question marks for the Maple Leafs. They signed a bunch of older free agents, they did it to themselves and they were destined to fail. So, what happened? Injuries have been a factor (Jason Allison, Eric Lindros, Ed Belfour); Mats Sundin is having an un-Mats-like season; and Belfour has been inconsistent.

Vancouver is a different story. The Canucks have a better team, one of the five most-talented rosters in hockey. But Todd Bertuzzi, Brendan Morrison and Markus Naslund have been terrible. The team finally got Ed Jovanovski back, after losing him Feb. 1 to an abdominal injury, and is still losing. Do the Canucks really want to win? They don't look as though they're competing very hard, and they are getting beat to the puck. Plus, I know the players are going out there with the "Marc Crawford might be fired" cloud looming overhead.

Well, I started with Nashville, and I have to end with the Preds, as well.

The drastic change in Nashville's fortunes is shocking. For a team to go from being one of the best eight teams in the league with a great chance to make a Cup run to losing its MVP goaltender for the rest of the season ... it's just a backbreaker for the Predators.

The goaltender is the most important positional player in all of sports, and for Nashville to lose No. 1 goalie Tomas Vokoun for the rest of the season is a hard pill to swallow. As I said earlier this week, coach Barry Trotz has to keep his team believing. That is one of the few things that will carry the Preds through any kind of postseason run.

Barry Melrose, a former NHL defenseman and coach, is a hockey analyst for ESPN.