With Halloween right around the corner, nobody should feel more in tune with the festivities than the Washington Capitals. 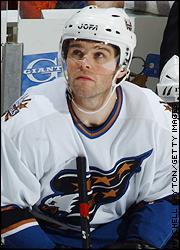 The Caps looked like ghosts during their recent 0-5-1 road trip and whimpered through the final stages of a 4-1 loss at Toronto on Saturday night. They could turn MCI Center into a house of horrors this week when they host the Anaheim Mighty Ducks on Wednesday and then the Atlanta Thrashers in a fitting Halloween night game.

They've already got their costumes.

Star forward Jaromir Jagr will be dressed as a bank robber, which he is every time he cashes his pay check. Mind you, it would be a well-tailored costume as Jagr still has five years and $55 million remaining on what might be the single most absurd contract ever written in the history of the NHL -- which is why the New York Rangers are the most likely team to have some interest in picking up the deal.

Coach Bruce Cassidy will be the sailor walking the plank. If he lasts into the month of November it will be astonishing. Meanwhile, George McPhee will be outfitted as an unsuspecting executive at Enron, wondering how it all went so haywire. He should also be wondering if he will join Chicago's Mike Smith as the next GM without a job.

McPhee's part in all this blame is to be tempered a bit, because it was pressure from ownership that brought Jagr to Washington two summers ago in 2001. At this point, Jagr should be happy he is not in a city that cares more about hockey, or his recent heartaches about breaking up with his girlfriend
would earn him a well-deserved public hazing from fans and media.

Can you imagine: a player making that much money unable to turn up his game because of a love spat and no family around him?

Near the top of the division, you've got the Thrashers pulling together as a team through the tragedy they've endured. At the bottom, you've got the Capitals, whose top player is struggling because he is having troubles with Miss Slovakia, or whatever she is. It ranks right up there with Sergei Fedorov turning down $50 million because he was divorcing Anna What's-her-name.

To be fair, most of Jagr's frustrations are more likely based in playing for a team very different from the one he was used to his days with the Penguins. Just like Alexei Kovalev in New York, Jagr is finding out that the way the Penguins do things is a lot more friendly to elite freelance players such as Jagr than anywhere else in the NHL. The ice time you get is however much you need if you score points in Pittsburgh, and that isn't true anywhere else -- not even in Colorado.

The flip side of that is that when an elite player bolts Pittsburgh for more money, he had better be willing to give up some personal freedoms both on and off the ice, because no NHL franchise is as understanding of an elite player's demands as the Penguins. After all, the Penguins made their great runs with Mario Lemieux at the control as a player, and now they are owned by him.

What this all adds up to is likely a real interesting week for the Caps and GM McPhee. The team has been beset with injuries in the past, and if any team is used to overcoming slow starts, they are. But what is taking place early this season ranks among the worst short-term stretches in the club's zany history.

Last week's trading of captain Steve Konowalchuk leaves the team with only four players from the 1997-98 team that went to the Cup finals -- goalie Olaf Kolzig, forward Peter Bondra, and defensemen Sergei Gonchar and Brendan Witt.

Konowalchuk, who has meant far more to the Caps and its fan base than Jagr, will be an unrestricted free agent on July 1 and was told before the season that he likely wouldn't be back for next season.

The best part for Konowalchuk is that he is playing with a Cup contender in Colorado. The Avalanche had interest in Konowalchuk before the start of the season, but were worried that he could not skate well enough to keep up in the Western Conference -- which is why they were willing to part with Bates Battaglia.