Patrick Roy's No. 33 will head to the rafters tonight against the Calgary Flames, the team he beat in 1986 for the first of his four Stanley cup championships. He would lift the Conn Smythe Trophy as the playoff MVP that year, the youngest player to ever win this prestigious award. He would go on to win it twice more, ending his career as the trophy's only three-time winner.

It's easy to talk about an athlete by reciting his accomplishments. They're in the 2004 NHL Official Guide & Record Book on page 592, just under Dwayne Roloson in the current goalie section. Page 205 lists the best single-season goaltending performances, winners and runners-up for the Vezina Trophy. He won it three times and finished second in voting twice, although he certainly deserved to win it more than he did. His numbers are as overwhelming as his durability; he played in 1,276 regular-season and playoff games, winning a stunning 702 combined. 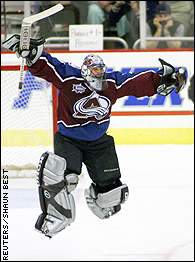 You can find his stats in many places. And while they tell you how many, they don't tell you how.

I got a front-row seat at one of his performances in 1987 at the Montreal Forum. I was with the Chicago Blackhawks and was about to play against the team I grew up with and loved. I pretended I was Rogie Vachon and then Ken Dryden -- previous Montreal greats -- and wondered what all the fuss was about with this Roy guy.

I watched him from nearly 200 feet away. He was agile. He moved around a lot more than he did in his later years, was way more acrobatic. He gave the five-hole to the shooter, and I noticed how quickly he could take it away. I wondered if he could play this way for a long period of time. Could he last? Boy, was he making some huge saves. He was always talking, communicating and wore his emotions on his sleeve. He grew on me.

He beat me and my Hawks 3-0 that night. I wanted to know and learn more about him and his "quirky" personality. I wanted to know what it took to win at his level, the highest of them all. I watched him beat me one more time in Montreal, 5-3. We tied 5-5 in Chicago, in what would be my last game against him and the Habs.

In those three games I learned something special about the confident, stubborn, charismatic goalie.

He wasn't going to just sit on the bus. He was going to drive it.

He was a leader. He would put his team on his back and say, "Let's go." Oh, he made some mistakes along the way, for sure. But he did everything with great conviction.

I was there that night in December, 1995, in the ESPN2 booth with the late Tom Mees, when the Wings scored more than they should have and Mario Tremblay, who was Roy's first roommate on the road, left him in the net for too many goals. The rich tradition of the Montreal Canadiens changed that night as Patrick walked by Tremblay on the bench, stopped and turned back to team president Ronald Corey and said something to him. What exactly was it he said? We could only speculate from the top of the Forum that night and guess that it was his last game. It was. He made the biggest decision of his life in less than 30 seconds. He said it with conviction. And he didn't take it back.

Four days later, he was traded to the Colorado Avalanche. Six months after that, he won his third Stanley Cup.

You can make up your list of the greatest goalies, a list that will include Roy, Terry Sawchuk, Jacques Plante, Glenn Hall, Dominik Hasek, Grant Fuhr and Ken Dryden, all for good reason. Roy, in my opinion, is at the top of the list.

You also can put together a list of the great leaders and you'll likely find the names of Ted Lindsay, Rocket Richard, Jean Beliveau, Bobby Clarke, Bob Gainey, Bryan Trottier, Mark Messier, and Steve Yzerman. You can put Patrick Roy on that list, too.

According to NHL rules, goaltenders can't be captains. If they could, Roy would have definitely worn a "C."

For the most part, goalies aren't the type to stand up in the middle of the locker room and say something to motivate the team. They're pretty much left alone. Not Patrick.

Remember during the 1995-96 season when plastic rats would rain down on the ice after the Florida Panthers scored a goal? Goalies would duck under the crossbar and into the net to shield themselves. Not Patrick. He wasn't going to hide. After giving up a goal during the first period of Game 3 of the Stanley Cup final, the downpour began. He just stood there. Rats all over the place. He didn't move AT ALL. I was told by a player that between periods, with the game tied and the Avs leading the series 2-0, that Patrick said there would be, "no more rats."

Patrick didn't allow another goal, and the Avalanche won the game. Two nights later, they won again in triple overtime by the amazing score of 1-0. More than seven periods of shutout hockey. No more rats.

How about his epic and emotional battles with the Detroit Red Wings? You want a player to step out and lead? How about your goalie going head to head, dropping the gloves at center ice with goalie Mike Vernon? At the Joe, no less.

Once wasn't enough, so he dropped the mitts with Chris Osgood the following year, again in Detroit, as he tried to spark his team.

He played the game with his heart and his mind, as his former goalie partner Craig Billington once told me. He had such great passion for the pads and the net. He cared about being the best and winning it all. Nothing else really mattered to him, not the individual awards, only the Cup.

After each game, he would go to the practice rink in the morning and break down the tape. He would analyze each goal against, good and bad, and figure out what he did wrong or what he could do better, and then went out on the ice and work on it.

He led by example that way. You could hear it in the voices of the Avs players when they faced adversity. It was always the same: "It's OK, we've got Patty in the net."

I watched many of his practices. There were times when his hip had to be killing him or the schedule was ridiculous and wearing everyone down, but there he was, battling puck after puck, challenging every player on the ice to be better than he was, perfecting the position he has owned, even in his 18th year of NHL hockey last season.

I thought Patrick would play one more year, then sail off and watch his kids grow up. I never thought that Andrew Brunette's goal in Game 7 of the Western Conference quarterfinals would be the last one he would give up.

But he's a man of conviction. When he said he was done, he was done. He knew it, but very few do.

I have a feeling we'll see him again. His passion will bring him back to this level, this time in a management position. And he will make the difficult decisions that it takes to win.

He knows how to.

Darren Pang, a former goaltender with the Chicago Blackhawks, is a hockey analyst for ESPN. His goalie rankings appear every other week in Net Effect.