A showman to the bittersweet end Monday night, NHL commissioner Gary Bettman showed some marketing savvy by calling Dave Andreychuk up to the makeshift podium at the St. Pete Times Forum to take both his and his team's first spin with the Stanley Cup.

Just moments after Tampa Bay's 2-1 Game 7 victory over the Calgary Flames, Andreychuk did an uncomfortable half-hug handshake with Bettman, then took the Cup with obvious joy. Skating around with the trophy held aloft, Andreychuk shook it like a tumbler overflowing with intoxicating possibility. He was celebrating the end of 22 years of falling short. 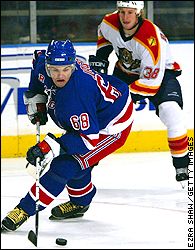 But he was also helping Bettman usher in the league's latest period of labor uncertainty.

With the season's conclusion, all thoughts can now turn to what lies ahead. Problem is, no one quite knows what does.

Now, three months and a week until the collective bargaining agreement between the NHL and its players union is set to expire, no new progress or ideas have been discussed on how to prevent what almost everyone expects to be a work stoppage.

"We don't want to have to worry about it," Tampa's now bona fide star player Vinny Lecavalier said during the Eastern Conference finals, "but it's part of the business."

On a marvelous Monday night, it was only a time to celebrate. But soon, all of the players on the ice will have their time to reflect on what many of their union colleagues have been thinking about for weeks now: Where do they go from here?

For Andreychuk, there would be a couple of more dizzying spins around the ice, then a parade by the Bay and like all winners, he should find time for a trip to Disney World during this summer of love, right?

But for all of the marketing savvy Andreychuk might possess himself, his thoughts are on a far more foreboding destination -- something he still likes to call next season.

"I want there to be hockey next year," Andreychuk said. "I think as a group in here, we have something going, and I believe the best thing for us is to keep playing as a unit. For myself personally, I want to play. And if I'm not playing, I want to watch. As a fan, I don't want to be denied that, watching hockey."

Despite passing "Go" on age 40 months ago, and putting the perfect championship finish on a 22-year career, Andreychuk says he's not quite ready to call it a career yet, labor pains or not. So while Bettman is busy having a few uncomfortable handshaking sessions with leaders of the players union this summer and probably through the autumn, you might expect to see a lot of familiar faces start turning up in hockey arenas all around Europe.

Even that grinning graybeard himself.

"That would have to be a decision made by my family," said Andreychuk, "but I still want to play and hopefully everything works out. But I'd especially like to play right here."

If a short-circuited CBA negotiation forbids such a wish, look for some SportsCenter shorties to focus on Peter Forsberg playing with his buddies in Sweden, or Jaromir Jagr again testing the Czech League waters, or -- get this -- Boston-bred buddies Tony Amonte and Jeremy Roenick of the Flyers getting their kids language lessons in popular European vacation destinations.

For Amonte, a trip to his ancestors' mother Italy was an enticing way to spend his downtime during the NHL lockout 10 years ago. It didn't really turn out that way.

"I thought I was going to play for a team in Naples," Amonte said. "I get there and find out it's for a team way up in the mountains [HC Fassa]. The people there were all nice ... but what do you do up there?"

"I've thought about playing in Germany again, or someplace else overseas," said Roenick, who spent part of the 1994 lockout playing for a team in Cologne. "But I think right now I just need a break from the game for a while."

For the bulk of established league veterans, most are likely to stay away from the game for a while.

"It looks like there's going to be a lockout, and we're prepared," Florida's Olli Jokinen said. "All the union members are on the same page. We're not going to give up anything we've got."

But Jokinen isn't kidding himself about the fight that lies ahead. When it comes to considering all the pitfalls and pratfalls of labor discord in sports, he's a learned student who appreciates the history behind the battle.

"The young guys don't know what's going to happen now," said Jokinen. "But when you get older, you look back to 10 years ago, what those guys did for us. The highest-paid guys were making like $4 million and now it's $10 million; the average salary was about $500,000; now it's $1.7 million. A lot of guys paid a big price with the last one. Now a lot of young guys owe them. Now the young kids are making tons of money when they come into the league. So those guys did the right thing."

Come mid-September, some of those older guys might yet join their younger union brethren on the ice rinks in Helsinki, Cologne ... hey, maybe even Naples.

"If there's no hockey, a lot of guys are getting prepared to play in Europe," Jokinen said. "Those leagues are waiting to welcome guys back. European hockey is going to be huge next year if there is a lockout. In my case, I have a couple of different options. I don't have a deal for next year either, so I've got nothing to hold me back. You hope they can get a new deal done, but you always have to have some plan."

Some players, such as Philadelphia free-agent defenseman Mattias Timander, who signed with MoDo in Sweden this week, already have engaged their alternative plans. Most have those plans ready to go, such as Tampa's Pavel Kubina.

He'll take a couple of weeks to enjoy this championship, then head to the Czech Republic to play for his local team, Vitkovice. Kubina is a bit of a hero in his native small town of Celadna, but in an uncertain year where more NHL players are likely to be spread around Europe than toiling in North America, who knows how many Czech heroes will be returning to the rinks of their youth?

Such as that supposedly greatest of Czech-born players?

"I don't know," Jagr said when asked recently whether he planned to return to his native nation to get a few games in next fall. "I'm still hoping there's not going to be a lockout by the end of this contract."

Rob Parent of the Delaware County (Pa.) Times is a regular contributor to ESPN.com.