OTTAWA -- Brad Marsh cradled his cup of tea in his huge hands and put his elbows up on the bar. Two major-league baseball playoff games were on the big-screen TVs up on the wall behind the bar and bright sunlight spilled onto the floor through the windows. 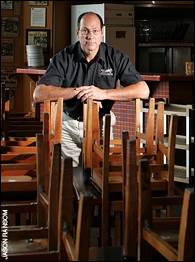 It's a quiet afternoon at his sports bar in the west end of Ottawa, one of two he owns. The other is at the Corel Centre and is now dark except on the nights when there is an event at the 18,500-capacity arena, which isn't often with the NHL lockout in full force.

Normally, Marsh would be gearing up for his busiest season. His Corel Centre location would be packed for a couple hours before an NHL game and for a few hours afterwards, especially after a Senators win, of which there have been many the last few years.

"It's a bad time to own sports bars," said the 46-year-old Marsh, a 15-year NHL veteran whose last season in the NHL was the Senators' first. He played for that 1992-93 team and settled in Ottawa when he retired with 1,086 NHL games to his credit.

He opened Marshy's BBQ and Grill, at what was then called the Palladium, in 1996 and opened this, his second location, last spring.

"As good as the World Cup (of Hockey) was for us a few weeks ago, it really illustrated how important hockey is, for us and for the Canadian psyche," he said. "Every bar in Canada that has a TV, its sales were up during the World Cup.