GATINEAU, Quebec -- It is early in the game, just past the first-minute mark, and Sidney Crosby of the Rimouski Oceanic stands on the bench. He has yet to leap the boards for his first shift, but already the biggest crowd of the season at the Robert Guertin Centre is on the edge of its seats in anticipation.

It is like this everywhere he goes, in the cities of Quebec and the Maritime provinces where the Quebec Major Junior Hockey League plays. Night after night, arenas are packed with hockey fans cramming in to see Crosby for themselves. 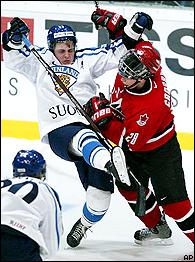 Crosby hits the ice just outside the Gatineau blue line, and in a single moment there is one of the many reasons why the 17-year-old is the most-heralded prospect to come out of Quebec since Mario Lemieux. Just two strides later, the puck appears almost out of nowhere and lands on his stick. The puck seems to follow the good ones around; it's their instinct to go not where the puck is, but where it will be.

Crosby has a wide, powerful skating stride, and in a couple of steps he is almost up to full speed.

He dashes over the Gatineau line, goes wide and winds up behind the net, a Gatineau defender in pursuit. Crosby banks the puck off the back of the net, spins 360 degrees to shake the defender, picks the puck up again and passes it in front to teammate Mark Tobin, who snaps it home.

After his first five shifts that night, Sidney Crosby had three assists. He finished the first period with four.

"I'm not more impressed than last year. You expect him to play that way," said Groulx, who saw Crosby dish out six assists in his first visit to Gatineau last year on his way to a 135-point season as a 16-year-old (a league record). "You give him a centimeter and he's going to make you look bad."

It was another dominating performance for Crosby, the kid Wayne Gretzky said will break his scoring records. Crosby is the top-rated QMJHL skater by the NHL's Central Scouting Bureau, and is the consensus No. 1 pick in the next draft, which has been put on hold until a new collective bargaining agreement is signed.

Not since Lemieux skated for the Laval Voisins back in the early 1980s has a player created the same kind of buzz.

Judging by the spike in attendance whenever the charismatic and talented Crosby comes to town, his presence could be worth a projected $1 million to Quebec league owners this season. That's a conservative guess based on attendance figures on the QMJHL website, figures that jump considerably when Rimouski is on the schedule.

Teams in the league have packaged Oceanic games with less-attractive games this year, causing a ripple effect on attendance figures. To see Crosby in many Quebec-league cities, you have to buy tickets to other games, as well.