GRAND FORKS, N.D. -- This is no way to defend a world title. 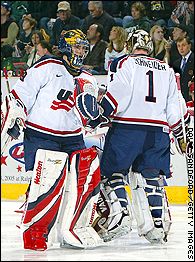 Or at least, no easy way.

That said, if the Americans, as generous hosts, were trying to add a little drama to this year's World Junior Championship, they did so by selflessly sacrificing a little of the country's hockey pride.

It all happened Wednesday night at the Palace on the Prairie, the University of North Dakota's gorgeous Ralph Englestad Arena, when Team USA suffered arguably the ugliest defeat in the history of its junior program by losing 5-3 to previously winless Belarus.

You remember Belarus, don't you? The small former Soviet republic that turned giant killer at the Winter Olympics in Salt Lake City two years ago by stunning Sweden on an infamous bobble by goalie Tommy Salo, then a member of the NHL's Edmonton Oilers.

Wednesday's Rout at The Ralph won't compare to that one in terms of national impact, as anything Belarus could accomplish at a tournament of teenagers like the world juniors pales in comparison to a major Olympic success of any kind. But in terms of this tournament and its history, this was a biggie, all right, right up there with Team Canada's nearly unbelievable loss to Kazakhstan seven years ago.

Happily for Team USA, the defeat isn't particularly damaging to its hope of defending the title it won with a come-from-behind win over Canada last winter. Indeed, the Americans can still seal first place in their pool with a victory over the Czech Republic tonight.

That said, this is a team with a badly damaged collective ego.

Until the Belarussians turned upset-minded, things had, after all, been going fairly well for the Americans as they sought to defend a title captured last year in Finland, the first time Team USA had ever won the event.

The fan interest has been a relief, as the last time USA Hockey hosted the event in the Boston area back in 1996, it was a total and complete disaster financially and aesthetically, and even featured a weak American team that lost to Ukraine.

This week, for games featuring the powerful, undefeated Canadians, The Ralph has been filled by Canadians wearing Team Canada jerseys and even hundreds of Winnipeg Jets sweaters. The Jets left town in the early 1990s, but Canadian hockey memories are long and the country has had precious little upon which to focus its national shinny passions since Gary Bettman and Bob Goodenow conspired to shutdown the NHL over 100 days ago.

Moreover, no country embraces this event as enthusiastically as Canada, and the fact the Great White North hasn't won the world junior title since 1997 has revved up interest even higher for this year's competition.

The NHL lockout, meanwhile, has made Canada's traditionally strong lineup even more muscular, as players who would likely otherwise be in the NHL are playing in this junior event. Otherwise, Dion Phaneuf would almost certainly be playing for the Calgary Flames, Patrice Bergeron would be making plays in Boston and Jeff Carter would be lining up as the heir apparent to Jeremy Roenick in Philly.

They followed that up with a leaky but still credible 6-4 triumph over Switzerland on Monday, the second game in which the U.S. offense was prolific but Montoya's goaltending was spotty, despite moving to a perfect 8-0-0 in world junior competition.

That led head coach Scott Sandelin to start backup Cory Schneider against Belarus, a decision that backfired when Schneider surrendered three early goals and was pulled in favor of Montoya early in the second period.

Montoya, on the first shot he faced, couldn't track a drifting wrist shot from outside the blue line off the stick of Siarhei Kukushkin, a boffo error that put the U.S. behind 4-1 and all but out of it for the night.

The defeat crystallized U.S. concerns over its inexperienced blue line and oddly inconsistent goaltending. Suter, the kingpin on the blue line, had a terrible night, finishing minus-4, and he and his defense mates will have to pull themselves together to slow the speedy Czechs after being outfoxed time and time again by the shifty Belarussians.

Until the shocking upset, the tournament had been rather predictable, with Canada dismantling three opponents by a cumulative 24-4 score.

Russia, featuring Alexander Ovechkin and Evgeny Malkin, the top two picks in last year's NHL draft, shook off the defeat to the U.S. and blasted the Czechs and Swiss and now appear to be the biggest challenger to the Canadians.

On the other side of the ledger, the Swedes, Finns and Slovaks have all been disappointing, giving the world junior event a two-tier look after much of the past decade had seen developing hockey nations close the gap on the traditional powers.

The format, like that of the recent World Cup, has come under criticism for producing too many meaningless games. Only four of the 10 teams in the event are eliminated in the preliminary round, and it was all but pre-determined before the event that two of those teams would be Belarus and Germany, which will in fact be the case.

Today's results will determine whether the U.S. will get a bye into Sunday's semifinals or will finish second or third in its pool and thus have to play a quarterfinal game on Saturday. No team in the history of the event has won it all after being forced to play in the quarters.

So while Sandelin, also the coach of the Minnesota-Duluth Bulldogs, won't be happy with the performance of his team, he can at least know that the U.S. has suddenly injected drama and intrigue into what had been a fairly predictable tournament.

The rest of the hockey world, notably Belarus, says thank you.

Damien Cox, a columnist for the Toronto Star, is a regular contributor to ESPN.com.