GRAND FORKS, N.D. -- If Team Canada goalie Jeff Glass hadn't bothered to show up for the first five games of this tournament, it is entirely likely the results would have been exactly the same. 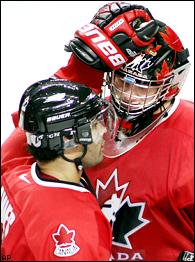 So dominating (dare we say perfect?) has Canada been in advancing to Tuesday's gold-medal game that had the personable 19-year-old from Cochrane, Alberta, decided to throw his pads over his shoulders and sit up in the Ralph Engelstad Arena stands with his family, it's entirely possible Canada would still have skated off with a 3-1 semifinal victory over the Czech Republic.

"It's definitely not the kind of game I'm used to playing. I did my best tonight to try and stay focused and just look at it one shot at a time," Glass said after facing a paltry 11 shots.

Glass allowed a goal on the only legitimate scoring chance the Czechs had, a shorthanded effort by Rostislav Olesz that beat Glass through the legs 1:50 into the third period.

"He just waited me out, waited me out and then shot five-hole. I played a little deep," Glass said. "It was my first real shot I had that whole game and it's not that I'm too worried, that's for sure. We're here for one job and we're at the dance now."

There are two ways of viewing the situation. That Glass, the top netminder for the Kootenay Ice of the Western Hockey League, has faced a total of 71 shots in four games (backup Rejean Beauchemin played in one preliminary-round game) suggests Canada will go to the gold-medal game without really knowing how its No. 1 netminder will perform in a close, pressure-filled game.

Conversely, that the Czechs, who were supposed to give Canada its first true test of the tournament, managed one shot on goal in 11:16 of power-play time and absolutely no scoring chances with the man advantage means there's a possibility the point is moot.

"I'm not going to change my mindset, that's for sure," said Glass, a third-round pick of the Ottawa Senators in last summer's draft. "I'm going to be ready for whatever happens. If it's a lot of shots. I'm ready. If it's a low [number] of shots, I'll be ready, too."

Historically, goaltending has been an integral part of Team Canada's identity in this tournament. Usually that identity has been provided by a flashy Francophone goalie.

Since 1995 when Jamie Storr shouldered the bulk of the work in a gold medal effort, Canada has relied on Jose Theodore, Marc Denis, Mathieu Garon, Roberto Luongo, Maxime Ouellet, Pascal Leclaire and, finally, No. 1 draft pick Marc-Andre Fleury to guard the cage.

This year, Glass emerged as the surprise starter ahead of three other Western Hockey League netminders. And while all four are considered solid prospects, it was the goaltending that was believed by scouts and analysts to be the team's only potential weakness.

Not surprisingly then, Glass might have looked to this tournament as a way of making a name for himself on junior hockey's grandest stage. It is an opportunity that is slowly diminishing for Glass, through no fault of his own. In some ways, he is a victim of his team's steadfast refusal to allow opponents anywhere near the net.

"You just do what you can. Talking yourself through the play, playing the puck, doing whatever it takes out there. But it's tough to do and it's going to take a lot of mental strength to do it and be good at it," Glass said.

The Czechs managed only four shots through two periods Sunday -- two if you don't count one that bounced off a Canadian stick and dribbled to Glass and another that was dumped in during a penalty kill that just happened to bounce toward the Canadian net.

The balance of the 11 shots was of the same garden variety, including the Olesz goal.

"From day one we wanted to be a team that gives up nothing," said Dion Phaneuf, the anchor of a punishing Canadian blue line. "That's what you want to do and that's how this team was made."

Does head coach Brent Sutter worry about heading into a gold-medal game with a goalie who has been little more than window dressing?