ORLANDO, Fla. -- With apologies to W.C. Fields, where would you rather be in February, central Florida or Philadelphia? 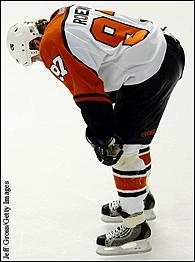 For Philadelphia Flyers center Jeremy Roenick, who was here to talk up Nickent golf clubs as a celebrity spokesman, there's no question. He'd trade his spot on a podium talking about a new driver for the chance to drive a puck by a goaltender or somebody into the boards.

Roenick should have been in Philly to face the Atlanta Thrashers on Saturday afternoon. Instead, as the last grains of sand slip through the hourglass that measures the time left to salvage this season, he was making an appearance on behalf of Nickent at the PGA Merchandise Show and talking hockey.

He doesn't know if this season is going to be saved, but he knows one thing: the game has been caused grievous harm in the United States.

Roenick, adopting a statesman's approach, wants both the owners and players to realize the consequences of the work stoppage.

"Put this in there: Because of all this, the owners and the players are going to have to find a way to give back to the fans, whether it's lower ticket prices, offering more packages, offering more TV exposure ... There has to be something so fans can say, 'This lockout was worth it because I got something out of it,'" the 35-year-old veteran said. "If we take the hockey the way it was during this period of time and keep it as is, it's going to be hard to get people back."

Roenick, usually one of the most energetic and gregarious personalities in the game, is often sought out for his opinions, which, at times, have bordered on the outrageous. He's outspoken, charismatic, and one of the best salesmen the NHL has had in recent years. He is one of the game's biggest boosters and, when needed, one of its harshest critics -- as his rant after getting high-sticked last season and tossing a water bottle at the referee would attest.

But with the season perilously close to being canceled, he has chosen a broader perspective on the situation and its repercussions.

"This is devastating for the game. Not just the fact we're not playing, but the fact there's such tension between the two sides that a deal cannot be reached," Roenick said. "Especially after how far the players have come and what we've given up. We've given up the 24 percent. We've actually stuck our neck out to offer them cost certainty.

"My main message right now is the game is more important than egos. The players need to give back what I think has gotten out of hand, in terms of salaries. Our game is great, our game is popular, but not popular enough to control $8-, $9- or $10-million salaries going out.

Roenick said he expected the players' last offer would have been something that could have worked to resolve the stalemate. In his opinion, the association offered a deal that would give the owners their "cost certainty."

"We guaranteed it. If it did not do what we said it would do, and put a drag down on salaries after three years, we would go to their system and accept a salary cap," Roenick said. "Something that's equal for both sides.

"We believe, with the deal we offered them, salaries would decrease, would drag and would in turn, create that cost-certainty atmosphere for the owners to make more money. The salaries would not escalate as high. The average salary would probably drop a little bit, but still maintain a strong dollar for the second- and third-line player and still your top players are still going to be able to make $5, $6 million, which is a lot of money these days."

Of course, it's probably a little easier for Roenick to accept a top salary in the $6-million range. He was one of the biggest beneficiaries of the salary explosion of the 1990s and is near the end of a career that places him near the top of the list of American-born players in the game, if not right at the top.

Roenick, who is recovered from his concussion problems that dogged him in the fall, said he is not contemplating retirement. If this season is wiped out, he's instructed his agent to look for work for him next fall in Europe.

"I wish I was playing, for sure. I've been going crazy without the game," Roenick said. "I'm feeling good. It's just going to take me a hell of a long time to get into shape after seven months of not being able to do anything. But I still feel like I can play this game. It'll take me a little while to get back into it, but my passion is still there."

The question is, will the game still be there?

Chris Stevenson of the Ottawa Sun is a frequent contributor to ESPN.com.