TORONTO -- Talk about an exercise in suspension of disbelief.

Bob Goodenow and Gary Bettman, architects of the most devastating labor stoppage in pro sports history, sitting shoulder to shoulder, insisting that, heck yes, they're prepared to become partners in a new NHL. As if it would be any other way.

The two, appearing at a joint news conference for the first time since the Salt Lake City Olympics in 2002, practically killed each other with kindness Thursday as they came together to announce the ratification of a new collective bargaining agreement by the players. 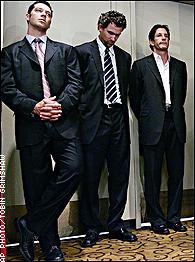 Please. Thank you. I agree. You're quite right. No, you first. I insist.

As for the fact the two have been at each other's throats in boardrooms and across bargaining tables for more than a decade? Completely blown out of proportion, they insisted -- a media fairy tale.

"I think there's been too much made about a fragmented relationship. It tends, I suppose, to make for interesting reading and telling," Bettman told reporters during a news conference that was broadcast live nationally in hockey-starved Canada. "But Bob and I have always had a professional relationship. On a personal level we've never had a problem dealing with each other. And I don't suspect there'll be any change in that.

"I have no doubt that labor and management can work together for the benefit of the game and the fans in an unprecedented way," Bettman added.

"I agree totally," Goodenow chimed in, and it was a wonder he didn't throw his arm over Bettman's shoulder to make the point.

"I think anyone who suggests that there's a problem and an inability for us to work together don't really know the level to which, as Gary alluded to, that we have had discussions in the past," Goodenow said. "I think you would all be very surprised at the level of the topics we discuss when we get together."

The only thing missing was a rendition of Kumbaya.

Never mind that Goodenow had little to do with the construction of a deal that he is reported to have fought vehemently against.

Never mind that it took the better part of six days after a tentative agreement was announced to get the two sides to agree to the schedule of how they were going to unveil the ratification and details of the new deal.

The nature of the challenge facing Goodenow and Bettman was best characterized by players who acknowledged it will take a seismic change in attitude for the two to become the partners this new deal demands.

"They have to be [partners], that's the simple answer to that. This deal doesn't work unless both sides can look each other in the eye and work together and sit in rooms. For Gary and Bob, it's a must," said Hurricanes player representative Kevyn Adams. "That's what this deal is based on, it's a partnership and if that doesn't happen then the deal doesn't go well. Whatever's gone on over the years with the leadership it's got to end because it has to be us together moving forward. It's not just us saying it, it's the truth now."

Blue Jackets player rep Todd Marchant likened the new deal that will see player salaries tied to league revenues, rising and falling with the league's economic health, to a marriage. If that's the case, Goodenow and Bettman are closer to Ozzie and Sharon than to Ozzie and Harriet.

"I'm not going to say they have to go to marriage counseling but I think we have to [work together]. There's no question. This game is above me, it's above Bob, it's above Gary. This game is about much more than that," Marchant said. "And two guys, they can only make recommendations. In essence, the 30 owners and the 700 players are the ones that make the decisions on this. It's going to be up to us. It's going to be up to the 700 and the 30 to say look it, this is what we've got to do."

And there's the rub.

The two leaders cannot be allowed to exist in a vacuum. The polarization of the two sides over the past decade is a direct reflection of the two leaders' enmity for each other. That must change and it can't be left to the two to change on their own. The players and owners must hold them accountable. They must monitor closely the way in which the two interact. And if either of them is found wanting, they must be shown the door.

After losing a season to this lockout, there are no second chances. The game has used its last mulligan.

"They've never had to [work together] before. Obviously it's a challenge that people will be monitoring on both sides," said Red Wings forward Brendan Shanahan, who has emerged through the lockout as a powerful voice among the players. "Once we get through the next couple of weeks where there's going to be some redistribution of players and some buyouts and the draft, now it becomes performance time for the people who think that this is going to be a good partnership."

The game is rife with those who feel both Goodenow and Bettman should step aside. Players, agents and general managers quietly say they don't believe the two have either the ability or the will to work together and that this new deal demands new leadership.

"I think these two guys have to go. It can't continue the way it's been going," said one top agent.

But both Goodenow and Bettman insisted Wednesday they aren't going anywhere soon. And so the game must take them at their word that their differences aren't as great as believed and that they can make the leap from adversaries to accomplices.

"Can they both change their stripes? Yes, because they're both very bright people," one agent said.

Friday afternoon Bettman will again return to the media spotlight when he announces the ratification of the deal by the NHL's board of governors and then proceed to unveil the draft lottery and significant rule changes. It will open up a dizzying summer that will include unprecedented player movement, the drafting of super prospect Sidney Crosby and a flashier, more up-tempo product on the ice when the regular season starts in October.

In the meantime we will watch the two leaders, now partners in a last-chance endeavor to save the game, disbelief duly suspended.