At noon ET Monday, an imaginary starter's gun sounded and the National Hockey League's general managers donned blindfolds and began their journey across the foreign terrain of the free-agent playing field. 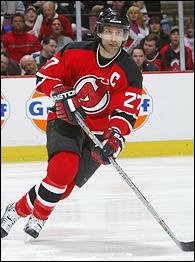 Some will sprint from the starting blocks. Others will move tentatively.

Some will stumble or fall. Some will step in something unpleasant along the way. The luckiest or smartest, or some combination of both, will complete this journey having built a playoff contender or even a Stanley Cup champion.

The one common theme is that none of these individuals has any clue as to what is going to happen going forward. None.

"How much money are free agents going to get? Who knows," Philadelphia GM Bob Clarke said.

The original plan was for the free-agency period to begin Sunday evening at midnight. But because of the believed early frenzy of offers and counteroffers involving top free agents such as Scott Niedermayer, Markus Naslund, Peter Forsberg, Nikolai Khabibulin and Derian Hatcher, the time was pushed back to midday Monday to give all sides more negotiating time.

"I'm going to be busy. I'm going to be very busy, I hope," said Columbus GM Doug MacLean, who said he's targeted about eight free agents he'll approach in the hopes of turning his Blue Jackets into a playoff contender. "We're going to jump in and see what happens."

Teams with money to spend under the salary cap and few players on their rosters -- like the Florida Panthers, New York Islanders and Boston Bruins -- are expected to make pitches early to get a sense of what the value for free agents is and to ensure they fill out their rosters in the most efficient manner possible.

Others will be more cautious for fear of paying too high a price too early in the game.

"I don't think even the teams that are definitely going after somebody know exactly what the price is to pay for a player," Nashville GM David Poile said. "So somebody's going to set a market, and that market may be good or bad for Nashville in terms of what interest we will have in specific players. It may allow us to get something done on Monday, [or] it may not allow us to get something done until later in the summer.

"I'll probably have a better handle on that as soon as Monday -- and I bet no later than Wednesday or Thursday."

With a good core of young players, the Predators are in a position, for the first time, to be a player in the free-agency market. Poile would like a big center and a big physical defenseman. There are players who fit that bill, including Hatcher, the former Red Wing who was bought out by Detroit, a team that needed to clear cap room.

The former Norris Trophy finalist will not come cheap or for just a short stay. Instead, he's looking for at least a three-year deal.

If the Predators can't find a defenseman who fits their budget, Plan B is to press a young prospect like Shea Weber into service. Still, Poile acknowledged he is under some pressure to upgrade his blue line, having traded regular NHLer Shane Hnidy to Atlanta at the draft.

The first free-agent signings are seen as crucial by some GMs, as they will establish a benchmark from which to base other negotiations. If Mike Modano, for instance, finds a team willing to pay him upward of $5 million annually for a three- or four-year period, that will establish comparative value for Pavol Demitra, Naslund, Forsberg and others. If there are no takers at that amount, it will likewise provide a benchmark for GMs and agents.

An early barometer is the two-year deal former 40-goal man Jeff O'Neill signed after being traded to Toronto over the weekend. At $1.5 million per season, O'Neill took about half of what his qualifying offer would have been in Carolina. Agents will argue that O'Neill wouldn't have signed that deal anywhere else, so it is of little relevance. But in the absence of anything else on this unique landscape, it is something.

"I think if you want someone, you have to go after that person and you have to know how much you're prepared to pay," Buffalo GM Darcy Regier said. "This system is going to require a lot of discipline. And this system is going to require that you really know the value of a player, not just within the National Hockey League, but to your own situation and circumstances."

Agents say some players are expected to hold off on signing until they see how a team is taking shape.

Boston had only a handful of players under contract through the draft but had made offers to restricted free agents Sergei Samsonov and Joe Thornton, among others. Thornton, the team's captain, is crucial but has so far snubbed the team's five-year, $25-million offer.

Will other quality free agents go to Boston, a notoriously frugal organization with a history of driving off its top players over money issues? If they do, will that prompt Thornton and his camp to reconsider their position?

Or do the Bruins spend a similar amount of money to bring in another elite free agent, like a Modano or Naslund, and withdraw the long term offer to Thornton, changing the entire team-building philosophy?

One agent told ESPN.com that with market value a complete unknown, teams may look to lock up two or three players who might move as a package, like longtime teammates Modano and Sergei Zubov.

Swedish stars Naslund and Forsberg, the top two offensive talents on the market, are rumored to be interested in playing together, although few teams could swallow the $12 million or more it would presumably take to put the two on the ice for a single season.

Complicating an already complex landscape is the potential for a flood of talented free agents next season.

With the age minimum for unrestricted free agency dropping from 31 to 27 by the end of the 2008 season and length of service provisions allowing players to become free agents after just seven years of service, players like Wade Redden, Zdeno Chara, Marian Hossa, Vincent Lecavalier, Thornton and a host of others could be available on the open market in the next two years.

"You're clearly going to have to look well down the road in attempting to put your roster together and focusing on who are the core players and trying to make sure they don't make it to the open marketplace at a price that gives you room to build the remainder of your roster," Phoenix GM Mike Barnett said.

Detroit GM Ken Holland, who is used to simply identifying desirable free agents and wooing them to Detroit with a big payday, had to buy out Hatcher, Darren McCarty and Ray Whitney, and even then he will still struggle to re-sign restricted free agents Henrik Zetterberg and Pavel Datsyuk.

In two years, he also faces losing Datsyuk and defenseman Jiri Fischer to unrestricted free agency if he can't sign them to long-term deals.

In the short term, Holland would still like to add a top-notch starting goaltender, although the free-agent market is remarkably thin at the position. Only Nikolai Khabibulin and Curtis Joseph would be considered legitimate starters, and Joseph's value has declined in recent years. The Red Wings would like Khabibulin, who led Tampa Bay to a Stanley Cup championship in 2004, but it's almost certain they cannot meet his asking price, which is expected to be in excess of $4 million per year.

"If Goalie X wants $6 million and you don't have it, you don't have any choice but to say no," Wings assistant GM Jim Nill said. "It's all about finding the right player at the right number."