But there's only so far even a selfless and frequently phlegmatic Swede can go. 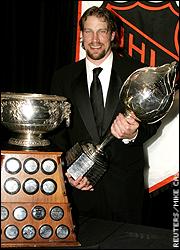 Already reeling from the loss of unrestricted free agent Adam Foote to Columbus the day before, the Avalanche on Wednesday made it be known they had offered Forsberg $13.5 million over four years -- and that it was as high as they could go before a Forsberg signing would require major surgery on the second tier of their roster.

That presumably would have involved trading either Milan Hejduk or Alex Tanguay. Or maybe even both.

The offer was even less compelling that that figure would make it seem. The Colorado package called for Forsberg to make only $1.5 million in the upcoming season, and then $3 million in 2006-07 and $4.5 million in the final two years.

Forsberg and agent Don Baizley decided the Avalanche were asking for too much -- or for Forsberg to settle for too little.

So the news broke about the same time as the thunderstorm Wednesday afternoon in Denver. The Avalanche had suffered the second half of the one-two punch.

Going into the free-agency period, it seemed painfully apparent that the Avalanche probably were going to have to settle for re-signing either Foote or Forsberg. Debates raged about which player the Avs should make their priority, especially in light of Forsberg's recent injury problems and frequent ambivalence about a long-term stay in the NHL.

The debates were moot.

Either/or turned out to be: Neither.

Or maybe it was that "either" was Pierre Turgeon and "or" was Patrice Brisebois.

The recently bought-out veterans were more than willing to accept the $1.5 million slots for the upcoming season and two-year deals, and -- in the damage-control mode -- the Avalanche announced their signings Wednesday night.

Until the Flyers' dramatic move became public knowledge Wednesday, the name of the game in Denver was Waiting for Foppa.

(We were thinking of it as Christopher Guest and Eugene Levy's "Waiting for Guffman," with Swedish subtitles.)

With the signing rush under way, with other franchises getting commitments from unrestricted free agents and carefully subtracting Column "B" from Column "A" to determine their salary-cap numbers at any given moment, the preoccupation in Denver was where Forsberg fit in.

And the answer was: Not at all.

At one point, it even seemed conceivable that Forsberg and Markus Naslund could take a two-man recruiting tour together, checking out their options and Swedish cuisine across North America. But Naslund's Tuesday night agreement with the Canucks ruled that out.

Now, the Avalanche and general manager Pierre Lacroix, at least temporarily, appear to be caught in neutral as other Western Conference organizations accelerate through the initial stages of the open-market period.

The Canucks, re-signing Naslund. The Oilers, acquiring Chris Pronger from the Blues, whose hand was forced after making qualifying offers to Pronger, Doug Weight and Keith Tkachuk. The Flames, bringing in Tony Amonte and Darren McCarty. The Blackhawks opening up the Wirtz Wallet and, after all the moths had flown away, signing Adrian Aucoin. The Kings, bringing in Pavol Demitra. And most embarrassing for the Avalanche, the Blue Jackets -- the Blue Jackets! -- outbidding Colorado for Adam Foote.

We'll stop before considering the East, and before this becomes such a transactions list, it should be in "agate-sized," tiny type on a scoreboard page.

What's it all mean?

If the Avalanche don't find a way to make a splashy move to compensate for Forsberg and Foote's departures, Pierre Lacroix's image as a master mover and shaker will have taken a hit in the early days of the new CBA.

Going in, it didn't take much work with a calculator to determine that he was going to have to be, well, imaginative to bring back most of the Avalanche roster. Just playing with projected salaries last month, even taking into account the depreciated contacts and benchmarks, the figure that popped up on the screen always was at least $46 million. The first step was confirming the team wouldn't buy out either Joe Sakic or Rob Blake, scheduled to make a combined $13 million this season. Though it was ridiculous to even take that possibility seriously, some did. (That's the new NHL, too.) And after making qualifying offers to their restricted free agents, including Hejduk and Tanguay, the Avalanche were backed further into the corner.

Early on, it seemed obvious that there was no way Colorado could bring back both Foote and Forsberg, the unrestricted free agents. And the fact is, when Colorado put a four-year, $12-million offer on the table for Foote 10 days ago, the implication was: Take it or leave it.
Foote left it and Colorado.

That wasn't a surprise, but his destination was. He was won over by GM Doug MacLean's passion, the $13.5 million over three years, and -- though nobody would come out and say it -- the realization the Avalanche were making his re-signing something less than a gotta-get-it-done priority. It was as if Colorado was saying, "If you take it, great. If you don't, fine."

In the wake of the announcement, Foote went on a P.R. offensive in Denver, belatedly returning phone calls, going on radio shows, and saying he and his wife intended to keep their Colorado home and would consider returning to live in the area after he retires.

"There wasn't much negotiation going on," Foote said. "I just had to make a decision for my family and my kids, and there was just too big of a gap."

Foote's departure was especially jarring because, since the franchise's arrival in Colorado 10 years ago, he was one of the constants. Sakic, Forsberg and Foote greeted, then bid adieu to, Patrick Roy and Ray Bourque and so many others. They twice held aloft the Stanley Cup after championship-clinching victories. They were the faces of the franchise in Denver -- even as the front office's resistance to promote individuals kept their faces off billboards.

In the new NHL, there was room for only Sakic.

First, Foote's situation highlighted the payroll dilemma franchises face, and also brought to the forefront some of the issues raised by the alleged opening up of the ice, if the new rules are enforced.

Foote is of the old school -- roughneck concentration on the opposing stars -- which always made the Avalanche's complaints about maltreatment of Forsberg ring a bit hollow.

If the game truly opens up, the issue is whether a 34-year-old defenseman of unquestioned talent and grit is at least less valuable than before. Yet Foote made it through the World Cup last year without even drawing a penalty, and he is better offensively than advertised. Plus, it's perilous to assume that the latest zero-tolerance pronouncements about obstruction actually will mean much more than the previous 316 zero-tolerance pronouncements about obstruction, despite the actual tweaking of the rulebook.

It was a matter of prioritization. It's a cliché, but true: When Forsberg is healthy, he's the best player in the world. The Flyers are banking on that, 14 years after they drafted him -- and then traded him a year later to Quebec for Eric Lindros' rights.

And now Colorado has to make do without him, both as a player and as a drawing card.

Avalanche season-ticket holders have invoices on their kitchen counters now, and though they were granted price cuts of either 20 or 10 percent, many are suffering from sticker shock. Before Wednesday, they were saying that unless they're watching both Forsberg and Sakic, they wouldn't be getting their money's worth and the cuts aren't enough. (Sticker shock? A season-ticket invoice for the two "worst" seats in the lower bowl is about $7,500. Still.)

As disillusioned as Forsberg has been for the past few years, the new rules and alleged reemphasis on discouraging obstruction should further unleash him.

Those who knew him didn't take seriously the possibility that he was gone from the NHL for good. He relishes the competition. But coming anywhere near the $7.8-million maximum salary for Forsberg was going to be a highly risky commitment, given his recent injury history, including his series of concussions that could leave him one hit away from being Lindros -- or Pat LaFontaine. He has done well economically, including in the shoe and golf course business, so he literally could afford to consider issues other than money in making his decision. But the combination of the Flyers' immediate energy in the free-agent period and the money involved was too compelling.

Amid the uncertainty, the intrigue and speculation -- both reasonable and ridiculous -- was entertaining. Here it is, the dead of summer, with the Denver Broncos in the early stages of training camp and the Colorado Rockies playing about as well as the original Colorado Rockies, and hockey was in the spotlight. Toss out the light-hearted suggestion that the Avalanche should check into the CBA terms and see if Pepsi -- as in the Pepsi Center -- could sign Forsberg to an endorsement contract to sweeten the deal? Within 24 hours, it's a genuine "sources-say" rumor, overheard in LoDo bars, which is good enough for some Canadian tabloids, but not for most everyone else.

Sakic and Blake were being ripped for not accepting further pay cuts to make room for Foote and Forsberg, which is comical, given that the new CBA prohibits renegotiation as part of the attempt to minimize loopholes. (Prediction: By 2008, lawyers will have discovered 2,008 loopholes and the cap will have softened considerably.)

But after the news broke Wednesday afternoon, the Avalanche had some scrambling to do.

To regain credibility. That might not be fair, given the new salary-cap restraints, but it was reality.