That'll happen when hell freezes over ...

Judging from recent events in Chicago, hell has frozen over -- and the Zamboni is making a between-periods circuit.

Judging from recent events in Chicago, hogs, boars and swine of all kinds are in the landing patterns at O'Hare, albeit running late because of edicts from air traffic control. 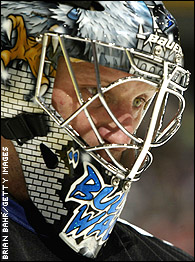 "The whole process showed that we have a different idea and a different approach," Tallon said from his office. "We prepared ourselves for this scenario. It was painful to do, but we did it two years ago, trading our other players away to get draft choices and younger players and make ourselves financially flexible to be able to be aggressive in the free-agent market when things broke.

"We understood that we had to make a commitment to get better, to show our fans that we were committed to winning."

What's next for the Blackhawks and owner Bill Wirtz?

Putting every home game on free television throughout the Midwest? Ending the phenomenon of young players in Schaumburg and Downers Grove and Lake Forest having a greater affinity for the Red Wings and the Blues than for the Blackhawks?

Running free buses from the Billy Goat Tavern (the real one under Michigan Avenue, not the adjunct near the arena), Gino's East and the Berghof to the United Center on game nights? Generating hockey conversation throughout the "dining room" at White Castle all day, and not just at one table at 2:31 in the morning?

Having to again reserve press box seats for not just the handful of newspaper beat writers but also other members of the Chicagoland media, who in recent years have acted as if they lost their Blackhawks press passes?

The season-ticket list swelling, with real names and not those of Chicago voters who cast ballots in the 1960 general election?

Hiring Chicago attorney Mark Weinberg as the team's legal counsel? (Weinberg was the publisher of the infamous "Blue Line," the unofficial, bitingly satirical program sold outside the United Center in the 1990s. And he followed that with "Career Misconduct," a self-published book billed as the "story of Bill Wirtz's greed, corruption and betrayal of Blackhawks fans.")

Yes, some of the above is a bit unfair.

The Blackhawks' thriftiness has been overstated in recent years, and especially in the wake of the new CBA, hindsight can at least lend further credence to the defensible point that the organization was pioneering the "reasonable" salary-cap mentality -- before it went into effect. And, yes, some of the shortsighted NHLPA groupthink arrogance involved in a few of the high-profile Chicago player departures was as worthy of derision as anything the Blackhawks did.

Perception is more important than reality.

And the Hawks have plenty of image-mending to do, on many levels, but most of all on the ice.

Even longtime hockey fan Neil Ament, the Northbrook, Ill., attorney who has represented fellow hockey zealot Weinberg in his fight with the city of Chicago over being banned from selling "Career Misconduct" outside the United Center, is at least giving the Blackhawks nodding credit for the early moves.

"It seems like parity is going to be here, at least judging by the movement going on now," Ament said. "So that obviously gives me cause for optimism."

Ament and Weinberg clearly have axes to grind with the Wirtz ownership, but their sentiments about the on-ice product aren't that exceptional among the huge Chicagoland hockey constituency.

(I've said this before, and I'll say it again: The media's frequent excuse to ignore the NHL in Chicago -- that the only hockey fans in town are the ones at the arena every night -- is a joke.)

Ament had Hawks season tickets from 1985 to 1994. Before that, he
was raised on the Hawks.

"We had first-row, first-balcony on the turn at the Chicago Stadium, which were absolutely phenomenal. They translated into about row 8 in the 300 level in the new building, and it was too expensive," Ament said.

"After that, I still would go to as many games as I could, maybe 10 or 15 games a year. The Jeremy Roenick situation, where they basically signed Alexei Zhamnov for the same money and let Roenick go, was the straw that broke the back for me. I guess it goes back to Bobby Hull when I was a kid, to letting him go.

"I learned from my dad, to not like the Wirtzes and how they don't accept the public trust that goes along with owning a professional franchise. Obviously, they're entitled to make money, but some of their decisions, made strictly from a bottom-line standpoint, made it very difficult to be a Blackhawks fan."

Is the Chicago market a sleeping giant?

"Oh, absolutely," Ament said. "The fans that came out for the Hawks, even when they were in the United Center for the first couple of years, are as passionate and rabid as you'll find. There are a significant number of Blackhawk fans who I believe, like me, go to very few games and want to minimize the impact on their pocketbook. You go to a Blackhawks game, from the minute you pull into the parking lot until you eat your last nacho, it's all going to Wirtz.

"It's fine if there was some hope, in terms of the product. I don't see it. Not yet. But, again, I'm going to be watching it. For one thing, I'm a hockey nut. Two, there's no way the Cup belongs at Tampa Bay. We have to get that taken care of. Three, the collective bargaining agreement means the players finally are realizing that they're not like the other major sports."

In that sense, the strange thing is that even Wirtz and the Blackhawks' management would agree with that last point.

"We know that we're going to have to convince a lot of people to come back, and these signings have put a lot of people back on board," Tallon said. "There's some excitement and some buzz around about hockey and about the Blackhawks. So I think it's achieved a goal."

Count me among those who believe the NHL and the game would be much better off with a revitalized Blackhawks franchise, with the ownership winning back the skeptical and disillusioned fans, with the United Center being at least a little reminiscent of those nights when both the organ and the cheering seemed about to blow the roof off the arena.

"I've seen the good and I've seen the bad," said Tallon. "But the good certainly is good. When this place is full and rocking, it's really fun."

So may the early signings be a harbinger. And may even those so embittered with the Wirtz ownership -- those like Weinberg and Ament -- find themselves unable to stay away.