KELOWNA, British Columbia -- In case anyone wonders about the importance of four days of scrimmages and drills in late August vis-à-vis picking Canada's Olympic team, line combinations used in Vancouver and Kelowna provide a strong hint as to the final makeup of the 23-man roster.

Barring injury, look for Rick Nash, Joe Thornton and Simon Gagne, the top-scoring line for Canada at the 2005 World Championship, to be intact in Turin, Italy.

Tampa teammates Vincent Lecavalier and Martin St. Louis clicked with Kris Draper, rounding out that forward unit. The third member of the Tampa troika, Brad Richards, found instant chemistry with Todd Bertuzzi. Although neither Joe Sakic nor Mario Lemieux was at the camp, figure the veteran stars to line up with Jarome Iginla. The trio started together in the 2002 Salt Lake Games, although the entire team's lines were juggled two games into that tournament. 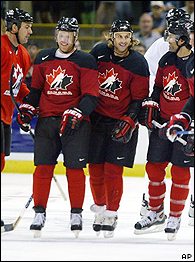 If Wayne Gretzky and the rest of the Hockey Canada brain trust opt to take 12 forwards and eight defensemen, that leaves just one spot open for either Steve Yzerman, Ryan Smyth or Shane Doan, leaving Dany Heatley, Patrick Marleau and Keith Primeau, among other bona fide NHL stars, on the outside.

One of the options the management team is also considering is taking a ninth defenseman who could play forward. Jovanovski, Boyle and Niedermayer would be the most likely candidates for such a move.

"We found out [that might be a good idea] in the World Cup, when we had two defensemen hurt in one game [Jovanovski and Redden] and all of a sudden we went from eight defenseman down to six," Gretzky said.

As difficult as the selection process is going to be, Gretzky left the door open for Canadian players who weren't invited to the orientation camp but enjoy strong starts this season. It seems far-fetched given the All-Stars who will be left off the roster, but one player who will bear watching is Paul Kariya, who recently signed in Nashville and was a member of the '02 gold-medal team. Even if super-prospect Sidney Crosby gets off to a roaring start in Pittsburgh, it's unlikely the 18-year-old will earn a spot on the Turin team, given his tender age.

"There was a lot of controversy in '02, and controversy subsides when you win," Gretzky said. "I expect there to be more controversies with this team, players that make it and some of the guys who unfortunately don't.

"I don't want to compare it to the '02 team because the '02 team won and it was a special group, they did what they had to do to win. But this team seems to be a little bit more talented. Whether we win or not remains to be seen."

It's unknown exactly when the team will announce its final roster -- Gretzky would like to wait as long as he can, maybe into the second week of January, to give Team Canada officials as many games as possible to scout. But the players' association has asked for the roster to be named in early December so families can make plans to attend (or not attend) the Games.

Back to the drawing board?

"It took four guys to put it on me. They couldn't quite get it over my stomach," Bertuzzi said. "They would look good wearing a pair of jeans going to a bar maybe."

"I don't answer political questions," head coach Pat Quinn joked when asked about the tight-fitting, aerodynamic jerseys and socks. "It's different. I don't have to wear them."

Upon hearing the negative comments pouring out of the dressing room, Nike Bauer Canada immediately dispatched communications manager Steve Jones to assure reporters that these jerseys were merely test models and all concerns would be addressed before the start of the Olympic tournament.


Florida Panthers netminder Roberto Luongo was less than pleased to learn he was one of two players to be taken to arbitration by their NHL clubs, a new wrinkle in the new collective bargaining agreement (Alex Korolyuk of San Jose is the other).

GM Mike Keenan said he made the move to ensure Luongo is under contract and at training camp in mid-September for the start of what is a crucial season for the Panthers, whose fan base has eroded since the team reached the Stanley Cup finals in 1996. But the move has the potential to backfire on Keenan if Luongo's sentiment this week is any indication.

Although the shootout will be a boon to some fans, netminder Martin Brodeur doesn't like the idea of points being awarded for a shootout win that could mean the difference between a team making the playoffs and not.

"They don't start doing a home run derby [to settle a tie in baseball]," Brodeur said. "I don't know why we shouldn't be the same way."

Prospera Place, home of the Western Hockey League's Kelowna Rockets, was jam-packed each of the three days the Canadian players worked out here. Tickets to the workouts went for $5, with proceeds going to charity. Hundreds of fans scoured the resort community for spare tickets, and those inside gave the players a rousing ovation as the final scrimmage came to a close, indicating that at least in this part of Canada, any resentment over the lockout has dissipated.

For the record, White defeated Red 7-3, with Thornton and Doan both scoring twice for the winners. The two squads split the first two scrimmages.

Now he's on my side


Count the Blue Jackets' Nash among those happier to be suiting up with the hard-nosed Foote than facing off against him. The two have been at each other's throats for much of Nash's young career, but now they will be teammates in Columbus after Foote left the Avalanche.

Legend has it that during one particularly vicious encounter near the end of the 2003-04 season, Nash shouted at Foote, "Hey, don't you want a Canadian to win the scoring race?"

"I don't know. I probably said a lot of things to him," Nash said. "I didn't get along with him at all. It was he and Pronger I hated playing against the most. He's just a mean defenseman that never lets up."

Learning from the past

Whatever success this Canadian team enjoys in Italy, it continues to owe a tremendous debt of gratitude to the 1998 team that finished out of the medals in Nagano.

"I think it's an accumulation of information. The guys in '98 passed on a lot," said Quinn, referring to a detailed report prepared by the '98 management team outlining what it felt were the reasons for the team's failures.

"Part of it had to do with inactivity in Japan. There was lots of time that the players were down. They felt there was a separation between coaching, management and players that they couldn't seem to pull together. So we tried to do some things that went along with that."

The 2002 team also went away from the "ghost roster" method of team building that saw players plugged into a preset template of two offensive lines and two defensive lines.

"Our theory right off the bat had changed that we were going to take our most talented guys," Quinn said. "To me, philosophically, that was a big change for us. It proved to be right in this case [in 2002], and hopefully we're doing the same thing again. The ghost roster almost has a negative concept to it. One of the statements in there -- I won't say who did it -- was, 'We played not to lose instead of to win.'"

Vancouver Canuck Brendan Morrison was a late addition to the orientation camp after Lemieux pulled out because of commitments in Pittsburgh.

The rest of the players took little time in ribbing Morrison about being Lemieux's stand-in -- someone immediately scrawled "#66" on his underwear bag in the locker room.

Andy Moog, an 18-year NHLer and currently the goaltending coach of the Dallas Stars, was formally added to the Canadian team coaching ranks Friday when he was named goaltending consultant.

"Like he did in '02, he'll watch not so much our guys but he's going to watch the goaltenders that we're going to face from the other countries and have videotapes for the coaches and the weaknesses and strengths of those goalies and their tendencies," Gretzky said.