It's the rare athlete who becomes eclipsed by his own legend, the player whose accomplishments are so great they almost cease to exist as a real flesh-and-blood person. 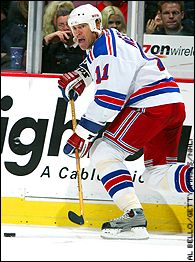 And yet for all of the imposing greatness that has enveloped Messier for much of his career, it was surprising to hear him describe with great affection a period that many would assume he'd prefer to forget -- a three-year stint in Vancouver during which his team failed to make the playoffs.

Twice named by the players as their MVP.

No doubt the 44-year-old Messier will enter retirement with fond memories of all, yet his turn on a young, evolving Vancouver team between 1997 and 2000 helps to illustrate the part of Messier that is the easiest to pinpoint but the hardest to define -- the notion that he is the finest leader the game has ever known.

In fact, Keenan confided that it was Messier who helped pave the way for his arrival in Vancouver. Had ownership been more patient, Messier might even have celebrated a seventh Stanley Cup there, Keenan said.

"I can't say enough about Mark Messier," he said.

The native of Edmonton arrived in the NHL via the World Hockey Association and became the consummate leader by first disproving the notion that one person defines a team when he led the Oilers, sans Wayne Gretzky, to the Stanley Cup in 1990. And then Messier proved to be the exception to that rule with his remarkable dominance during the 1994 playoffs when he led the fractious Rangers to their first championship in 54 years.

"He has to go down as one of the best all-time leaders in any professional sport," former Oilers coach John Muckler said Monday.

Now the GM of the Senators, Muckler was there when Messier emerged from Gretzky's shadow in Edmonton in the late 1980s. By then the team had won four Stanley Cups and Messier was a bona fide star not just with the Oilers but with various Canadian teams at the international level. But when Gretzky was sold off to the Kings in summer 1988, many assumed the team's glory had gone with him. In the first year it appeared it had as the Oilers lost in the first round of the playoffs.

But the following season, 1989-90, Messier finished second in scoring (to Gretzky, naturally) and the Oilers defeated the Bruins 4-1 in the finals.

The Bruins had won the Presidents' Trophy and were favored, Muckler said, but in the Oilers dressing room there was an almost palpable belief that they wouldn't be denied.

"Mark was a major cog in that," Muckler said.

Earlier in that playoff year the Oilers trailed the Blackhawks 2-1 with the pivotal fourth game in raucous Chicago Stadium. Messier took two minors in the first 4½ minutes, and then led the Oilers to a 3-0 victory.

"I think he scored all three goals. He did everything you wanted of a great player," Muckler said. "It was the best game I ever saw him play as an Oiler."

Mean? Yes, there was a mean streak that will always separate Messier from his peers in the elite class of captains and leaders, guys like Steve Yzerman and Ron Francis, even Gretzky himself. At various times during his career he was suspended for punching, whacking or spearing opponents including Thomas Gradin, Jamie Macoun, Rich Sutter, Mike Hough and Martin Strbak. In almost every instance, Messier was trying to settle a score.

But that mean streak was always balanced by an expansive heart, Muckler said.

Muckler recalled being in Washington on a road trip when the team reached a milestone of one sort or another. Messier was not with the team, having remained at home to nurse one of the many injuries his rambunctious style of play seemed to bring on. But when the players returned to their hotel in Washington, there was a bottle of champagne and two glasses waiting in each room, courtesy of Messier.

"He was the 'live today, let tomorrow take care of itself' kind of guy," Muckler said.

In announcing Monday that he was indeed retiring, Messier was asked if such leadership qualities were God-given or whether they were somehow learned.

"I think it started at home with my father," he said. Messier's father, Doug, was a former minor pro hockey player who acted as his son's agent throughout his career. But there were others, from coaches and former players through the years, that Messier credited with helping to mold his personality.

As much as he might have been a product of his environment, no one achieves what Messier has without having something special woven in their DNA. Teammates recall the simmering confidence that seemed to ooze from him and infect those around him; the belief that, no matter what, something good was going to happen.

It was this confidence that gave rise to Messier's Namath-like prediction during the 1994 playoffs that the Rangers would come back from a 3-2 series deficit against New Jersey. Messier, of course, scored three times in Game 6 as the Rangers won 4-2 to tie the series. They would go on to eliminate the Devils in Game 7 in double overtime, and then prevail over Vancouver in another seven-game classic en route to the franchise's first Cup win in 54 years.

"Come on, who does that?" asked former teammate Glenn Healy, still incredulous more than a decade later.

After the Rangers won the Cup, Messier discovered that a long-time dressing room attendant wouldn't get a Cup ring.

"He went out and bought him one himself," Healy said.

There was another night in Hartford when Messier became so emotional during a team meeting that he began to weep.

"And then all of a sudden his tooth popped out of his head. He was so passionate," Healy said.

"Like a lot of the great generals in wartime history, that's the best way to describe him," added Kevin Lowe, who played with Messier in Edmonton and then in New York.

Now the GM in Edmonton, Lowe left the door open for Messier to return for a 26th season. Likewise, the Rangers gave Messier a similar option in New York. But even the lure of being able to pass Gordie Howe for most games played could not dissuade Messier from pursuing what he believes is the right path for him.

"It's been a long career. I've achieved a lot. There was just really nothing left for me to achieve, I guess," Messier said. "It was just time to move aside and go on to something else."

Some, no doubt, will wonder at Messier's final years in the game, the fact he went seven straight seasons without a playoff appearance leading up to his retirement. Yes, it was discouraging, Messier said. But so be it.

Does he have regrets? Sure. Play 25 years and there's bound to be some things you'd rather do over, he said.

Still, it's funny how the legends seem to have fewer than the rest.