ATLANTA -- This sure is a wacky way to build a Stanley Cup contender.

Rebuild your team from the ground up with grit, veteran scoring, a blue-chip goaltending prospect, and a big defense with lots of offensive upside, and then refuse to sign your best player.

Uh, wait a minute. Actually, it doesn't seem like the way to build a Cup contender at all. 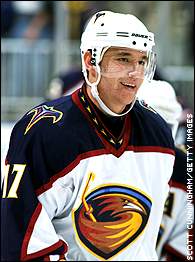 After deftly refurbishing his team since the end of the 2003-04 season, Atlanta GM Don Waddell has become immobilized on the single-most important element in transforming the Thrashers from perpetual pretenders to legitimate Cup threat: signing star forward Ilya Kovalchuk.

With the start of the NHL schedule a week away, it is looking more and more like Kovalchuk, a restricted free agent, will ply his trade in the Russian elite league this season.

Imagine filling a home with lovely furnishings, beautiful carpets and a fridge full of fine foods and cold beverages, and then refusing to pay to have the roof put on.

The Thrashers can say they're making a statement, drawing a line in the sand, standing on principal, but they're still going to get rained on. And make no mistake, Kovalchuk is the roof that covers the Thrashers' home.

Inside this house, Waddell has gathered the best goaltending prospect in years, Kari Lehtonen, a two-time Cup winner in Bobby Holik, one of the top five young forwards in the game in Marian Hossa and a wily veteran sniper in Peter Bondra -- elements that should bring to an end the club's disappointing five-year playoff drought.

And if that's all this team hopes to accomplish, to sneak into the playoffs for the first time and then get their heads handed to them by Philadelphia or Tampa Bay or any other team that didn't go halfers on building a team, then so be it.

But a new ownership group in Atlanta didn't come here to squeak into the playoffs. They came here to build a winner. Or so they say.

Until this point, they've been good to their word, taking on big salaries in the form of Holik, who will earn $4.25 million this year, and Hossa, who will make $5 million.

But although they are spending more aggressively, they have also left oodles of room to pay Kovalchuk with a payroll that currently stands at slightly less than $31 million, well below the projected $39-million cap.

So why isn't Kovalchuk in camp getting used to his new teammates?

Not surprisingly, it's come down to a fundamental disagreement over Kovalchuk's value.
From the Thrashers' viewpoint, Kovalchuk's value is similar to that of Rick Nash with whom Kovalchuk tied for the league lead in goals in 2003-04 at 41.

Nash signed a five-year, $27-million deal this summer. The Thrashers have offered a slightly sweeter version of that contract to Kovalchuk. That offer has, not surprisingly, been rejected, given that Kovalchuk is a significantly more attractive player having finished tied for second in the league with 87 points in 2003-04, 30 more than Nash.

Kovalchuk, 22, has also seen his point and goal totals jump in each of his three seasons, and there is no reason to believe he could not lead the league in scoring and/or points in a more open game.

Is Kovalchuk worth the $6 million per season average the Thrashers are now paying Hossa, whom they acquired via trade when Dany Heatley demanded to be moved? The offensive numbers are similar, although Hossa, 26, has more experience.

But this is where things get a bit more complicated.

Is Hossa a franchise player?

Does he possess both the tangibles and intangibles of a player like Jarome Iginla? Joe Thornton? Jaromir Jagr? Is he the kind of player that puts up big numbers and is a big draw in and of himself?

The Senators didn't think so. That's why they signed him to a three-year, $18-million contract, and then traded him hours later to free up money to lock up players they believed more accurately fit that bill, Wade Redden and Zdeno Chara.

Not to diminish Hossa, who certainly has the tools to finish within the top 10 in scoring this season, but his value to the Thrashers is still less than that of Kovalchuk by almost any measuring stick.

During the 2003-04 season, when Kovalchuk's close friend Heatley was recovering from injuries sustained in the deadly car accident that cost teammate Dan Snyder his life, Kovalchuk became a surprise leader in the dressing room and on the ice.

His 23 minutes and 41 seconds per night in ice time was tops among NHL forwards. He led the league in shots. He killed penalties. He manned the power play on the point.

Is he still a menace defensively? Sure. But defense has been like kryptonite to the entire Thrashers team since they entered the league.

In the absence of the troubled Heatley, Kovalchuk has become the face of a franchise that has little in the way of profile. It has been five straight seasons without a playoff game and attendance in the past three seasons has ranked 21st, 28th and 28th, respectively. And that was before a 10-month lockout that erased an entire season.

This is a town in which the Braves won their 14th straight MLB division title. The Michael Vick frenzy is growing stronger by the day and college football is a religion, not a pastime.

And the Thrashers? The jury is still out. In the coming weeks, we'll find out if they're going to bother to come back. Rest assured, more fans will be lured back to Philips Arena with No. 17 in the lineup.

It is this notion of Kovalchuk as franchise player that has led Kovalchuk's people to suggest a salary more closely aligned with that of Vincent Lecavalier, the former No. 1 draft pick who signed a four-year, $27.5 million deal with Tampa Bay this summer.

Kovalchuk's regular-season numbers eclipse those produced by Lecavalier, who has never scored more than 33 goals and registered nine fewer points than Kovalchuk during the last regular season.

But Lecavalier has a little thing called a Stanley Cup ring and his play during the 2004 playoffs, followed by his MVP performance at the World Cup of Hockey, have elevated him to the upper echelon of NHL stars.

The Thrashers, naturally, think Kovalchuk has some things to prove before he is afforded that kind of compensation. And no doubt they are cognizant of where the bar is set for the next generation of Thrasher stars, whether it's Lehtonen or promising defenseman Braydon Coburn.

But in the end, it's not so much the dollar amount in question but the strategy that's been employed that is baffling.

If Kovalchuk signs before the end of the week, then it will be a race to get on the ice for the season opener against Florida on Oct. 5. Does anyone know what kind of shape he's in? Does he run the risk of injuring himself having missed most of camp?

And those troubling questions represent the best-case scenario.

If he plays in Russia after Oct. 5, he cannot return to Atlanta without first passing through waivers. Not an option. And if Kovalchuk decides not to play in Russia (he's indicated he will) but waits for an offer, the team must sign him by Dec. 1 or he can't play this season. Likewise, not an option.

The Thrashers are wagering that Kovalchuk wants desperately to come back and play in the NHL. The company line has been that Kovalchuk wants to be the best player in the world and to be a leader on a winning team. Some familiar with the situation think that's the team's way of exerting subtle pressure on Kovalchuk to sign for less.

Regardless, it's still fair to ask what kind of leadership skills a player possesses after he thumbs his nose at $5.5 million per year at the age of 22.

It's the kind of impasse that reinforces the notion held by many hockey people that Europeans -- and Russians in particular -- care only about the bottom line, and that winning in general, and winning a Cup specifically, is an afterthought.

Of course, had Waddell gone after Kovalchuk in early August, perhaps Kovalchuk would have accepted the team's offer. But Waddell was busy filling that shiny new house with furnishings.

You know the house, the one without the roof.