Dripping with sweat, Brent Peterson came off the ice after the Nashville Predators' morning skate in Denver, looking like what he is -- a longtime NHL player-turned-assistant coach who luxuriates in the daily routines of his job. He can't get enough of it, including both the instruction and the playfulness on game morning, when coaches can linger and be like little boys fooling around on the pond.

At age 47, the Predators' associate coach by all rights should be one of the NHL's prime candidates to move up into a head coaching position. 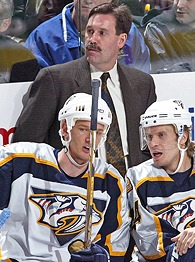 His resume is lined with credibility, from his long NHL playing career with Detroit, Hartford, Vancouver and Buffalo as a heady defensive-minded forward to a coaching run that includes a Memorial Cup championship as the head coach of major-junior's Portland Winter Hawks.

In fact, Peterson was so ensconced as a coach and part-owner in Portland, where he had also played his major-junior career and where the Winter Hawks remain a strong draw as the winter sporting alternative to the NBA's Trail Blazers, that it was a bit surprising he accepted the offer to return to the NHL with the Predators in 1998.

But he did, and as Barry Trotz's top assistant, Peterson has been a critical part of a Predators operation that has ridden out the expansion rough waters through six seasons and is coming off its first playoff berth in 2004, when it lost to the Red Wings in the first round.

Short of a stunning medical advance, there is no skirting it. Peterson knows that at some point -- in 10 years, perhaps -- the effects of Parkinson's disease will be more visible, and the minor symptoms that are now minor annoyances will become something more.

After the Predators exited the playoffs 17 months ago, Peterson decided it was time to tell his children, his employers and the media something he and his wife, Tami, had known for about two years. He had been diagnosed with the neurological disorder that progressively takes its toll, joining, among many others, Pope John Paul II, Michael J. Fox and Muhammad Ali.

Peterson would probably prefer that this column be about, say, the adjustments in approach the previously close-to-the-vest, defensive-minded Predators have had to make in the wake of the NHL's obstruction crackdown and new rules. Or certainly their 3-0 start, including the come-from-behind 5-4 win over Colorado in Denver on Wednesday night. If he were looking over my shoulder, he would say this has probably already gotten too dramatic and too revealing.

He's OK now and he's not looking for sympathy.

"I haven't had any problems and my doctor has been great," Peterson said. "He said I'm going to be fine for years. It is progressing, but it's progressing very slow. So I can't say I'm lucky, but sometimes it advances pretty fast."

Indeed, for Peterson, this is neither an obsession nor the first act of a melodrama. The health issue is there, but life goes on, and above all he is determined not to let it affect his work or his golf game. He has a slight tremor in his right arm and occasional numbness but, in part because of effective medication, the symptoms are virtually unnoticeable.

"I'm part of some support groups, but I just try and stay low-key and not say much," Peterson said. "When people ask me questions, I try and answer them. But I'm doing fine.

"The first step is trying to deal with it myself so I can handle it as a long-term thing, so I can handle it mentally. Physically, I'm fine. Sometimes you get thinking, 'What's it going to be like in 10 years?' and that can mentally get to you, because you see people in the advanced stages and you can get pretty depressed.

"Right now, I'm just learning how to deal with it. I love being in the season because last year was terrible, with not too much to do. We're so busy now, you don't think about it -- you go and do your job, and it's back in the game and it's fun. I'm just trying to deal with it and learn about it and survive day by day. The guys have been really great, and the coaches, they treat me like I'm normal."

Peterson laughed and added, poking fun at himself and not acknowledging his disease, "Even though I'm not normal."

A little later, Nashville general manager David Poile smiled when asked about Peterson and his health.

"Did he talk about his golf game?" Poile asked. "He got two holes-in-one during the lockout. I can't beat him."

Turning serious, Poile noted: "It's a terrible thing for a young person to have. My dad [hockey icon Bud Poile] had Parkinson's, so we dealt with that for 15 years, but he was 80 years old. But I really don't think anybody's treating Brent any different."

"He's not getting any more strokes on the golf course," he said.

At Portland, Peterson coached many future NHL players, and the bond between major-junior coaches and players they've influenced can be lasting. So as the Predators make their first post-lockout swings around the league, his former Portland players -- including Brenden Morrow, Marian Hossa, Jason Wiemer and Steve Konowalchuk -- will be telling him they're rooting for him.

"He was a super coach for me in junior," said Konowalchuk, the veteran Colorado winger. "The way I play today stems a lot from what he taught me. He's as good a guy as it gets, and he'll do anything for his players. I think everybody who played for him has that kind of respect.

"In his situation, he's such a strong man, with such a strong family, that you almost think it's one of those things where God only gives it to people who can handle it, and he's the type of guy who'll get through it. His character is flawless, from roots on up," he added.

Peterson wants to be a head coach in the NHL. He doesn't hide that ambition, so the issue becomes whether his candor about his diagnosis will come back to haunt him when general managers around the league compile short lists or make decisions. And while it's tempting to espouse the idealistic view that nobody will consider Parkinson's when evaluating him, that would be naïve. And Peterson knows it.

"Oh, that's just the way it is," he said. "There's not much you can do about it. I hope I get a chance someday, but if I'm a GM, I'd have to look into the health issue. But according to my doctors, I'll be fine and it won't affect my mental capacity. It shouldn't ever affect my intelligence about the game.

"But there will be a stigma because of, well, not stupidity, but ignorance about how it will affect me. I think it would hurt my chances, I'm quite sure of that. I'm not trying to be sour about that. But I try to be realistic. There's nothing you can do about it. You have to deal with it," he said.