Don't look for an NBA-style dress code flap in the NHL.

That's because most hockey players have been told what to wear for years, long before they reach the NHL. Most junior and minor-pro teams have some form of dress code covering what is and isn't to be worn to games and around the rink. Dress codes for minor hockey teams are also common and are seen as a way of fostering team unity and cohesion. 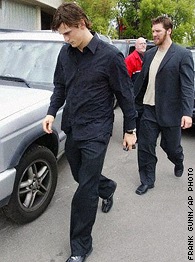 "Ten years old we had to wear a shirt and tie," Tampa Bay Lightning star Vincent Lecavalier said, recalling his days growing up in the Montreal suburb of Ile-Bizard, Quebec. "I had the leather zip-up tie.

"Everybody wears a suit. We're just so used it," added Lecavalier, who is known as one of the snappier dressers in the league. "It would be nice if we could wear what we want."

That's not likely to happen anytime soon, because the players' dress code is written into the current collective bargaining agreement.

Exhibit 14, Paragraph 5 reads: "Players are required to wear jackets, ties and dress pants to all Club games and while traveling to and from such games unless otherwise specified by the Head Coach or General Manager."

Similar language was in the previous CBA, which covered the period from January 1995 to September 2004.

Tampa Bay coach John Tortorella has a "no jeans" rule for his team. He said it's merely an extension of what he believes should be his team's unwavering focus on preparation and how they should conduct themselves on and off the ice.

His counterpart in Atlanta, Bob Hartley, agrees, and at the bottom of team memos and notes, he includes the message "Don't embarrass yourself and don't embarrass the organization."

As an assistant coach with the U.S. entry in the 2005 World Championships, Tortorella was unimpressed with the "casual dress" standards imposed on the team during training camp in Lake Placid, N.Y.

Some guys were wearing jeans with holes in them, Tortorella said. "I thought we looked like slobs.  You say casual to these guys, and they'll push it right to the limit."

Hartley has always imposed a dress code on teams he's coached going back to his first coaching assignment in his hometown of Hawkesbury, Ontario.

It was while coaching major junior in nearby Laval, Quebec, that Hartley had a unique dress code experience.

One of Hartley's players was Gino Odjick, who went on to play in 605 NHL games, logging 2,567 minutes in penalties.

Odjick came from a family of modest financial means, so Hartley went to a friend who owned the local men's clothing store to get Odjick a pair of corduroy pants and sweater so he would fit in with the team.

One night Odjick showed up in Hartley's office before a game with his new clothes ripped and covered in blood.

It turns out Odjick and his father had been driving in for the game from their home in Maniwaki and had seen a deer on the highway. They stopped and gave chase, shooting it some distance from the roadway. Odjick ripped his clothes while clambering over some barbed wire fences dragging the bloody carcass back to the car.

Nonplussed, Odjick proudly led Hartley to the arena parking lot to show him the deer.

"We had to go and get him another suit the next day," Hartley said.

What does Hartley think of the NBA dress code kerfuffle?

"I'll worry about my own team and my own league," he said.