Rick Tocchet is a widely respected assistant coach of the Phoenix Coyotes, handpicked by good friend Wayne Gretzky to help turn the Coyotes into a playoff team. Before that, he was one of the most respected players of his generation. Fearless. Gritty. Talented.

If the allegations leveled against Tocchet by the New Jersey police prove true, it also appears that in his spare time, Tocchet was the moneyman behind a sophisticated illegal gambling ring, with ties to organized crime. During a 40-day period, this gambling ring allegedly took in $1.7 million in bets -- including bets from NHL players and others connected to the game, as well as Gretzky's wife, Janet Jones -- according to Associated Press reports.

Well, bad is a relative term, apparently, when it comes to the NHL. In spite of the charges announced in New Jersey on Tuesday, Gretzky told reporters Tuesday afternoon that Tocchet would be behind the bench as the Coyotes hosted the Chicago Blackhawks that night. (Those plans changed, however -- Tocchet skipped the game and instead flew to New York City to meet with commissioner Gary Bettman.)

Illegal gambling? Prison? Money laundering? Never mind that, we're in the middle of a playoff race.

You'd think that prospect might have been a bit sobering for Tocchet and the Coyotes, but the team seemed more concerned with exploiting the Blackhawks' defense than how this situation would look to a hockey public just beginning to trust the game again.

"In response to the allegations against Coyotes associate coach Rick Tocchet, and consistent with club policy, the Phoenix Coyotes organization declines further comment on the situation until definitive information becomes available," president and COO Doug Moss said in a press release. "The focus of the Coyotes organization is to continue our drive for a playoff position."

The NHL was only slightly less tepid in its response.

"While we know little more than has been released publicly, we understand that Mr. Tocchet's conduct in no way involved betting on hockey. And while betting on football or other sports may be the pervasive issue, it in no way justifies poor judgment or otherwise alleged inappropriate action," said deputy commissioner Bill Daly in a statement.

As for those half-dozen to a dozen people connected to the league who might have placed wagers with the syndicate, Daly reiterated that there's no indication anyone bet on hockey.

"We take this issue very seriously and will monitor the proceedings closely," Daly said.

An assistant NHL coach is charged with gambling crimes that connect him to organized crime, but had all intentions of turning up on an NHL bench before turning himself in to authorities. The coach's wife is implicated by law enforcement sources and he passes it off as though it was nothing.

What are we missing here?

Does no one else see any red flags? 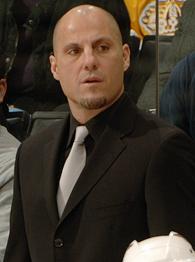 Lots of people gamble. That's a given. Maybe a bunch of hockey types (and maybe their wives) got together and made a few wagers. No big deal, right? Well, obviously the New Jersey State Police felt it was a big enough deal to launch an undercover sting operation.

As one respected former NHLer said, "This isn't your office Super Bowl pool.

Every year, the NHL sends in members of its security group to talk to NHL players about the pitfalls of being a professional hockey player. They warn players about the dangers of drugs, performance-enhancing supplements, alcohol and gambling, especially betting on pro sports.

The gambling culture in the NHL is time-honored and well-established. But it's one thing to play a few hands of poker, even if the pot goes to $6,000 or $7,000, as this player has seen happen. It's another to bet on professional sports when the money chain leads to organized crime.

And whether the bets were made on hockey is really moot when the average fan reads about this and wonders why everyone seems to be giving a collective shrug of their shoulders.

A league source told ESPN.com that Bettman was livid when he found out. Good thing. Too bad he didn't share that anger with the public.

To be fair, league officials didn't find out about the investigation and the charges until very late Monday night. As of Tuesday afternoon, a league official said they didn't know the identities of those who allegedly made bets, although an official with the New Jersey Division of Criminal Justice told ESPN.com those bettors are scattered across the United States and Canada, which has no doubt made for a lot of nervous folks around the NHL.

But how about this: When the NHL finds out who those people are, and presumably the New Jersey State Police would be happy to share that information with the league in a timely fashion, the NHL should suspend them until the league can perform its own investigation and prove that (a) no one bet on hockey games and (b) no one broke any laws in placing those bets.