Before the Detroit Red Wings won their first of three Stanley Cups in six seasons back in the spring of 1997, captain Steve Yzerman was in Las Vegas during the offseason playing craps.

"Let's go play somewhere else. There's no luck at this table," the one said to the other. 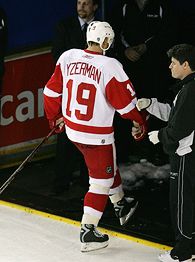 Yzerman told that story after the Wings' Cup victory in 1997, the first in 42 years, not with smugness or a sense of self-righteousness, but rather to illustrate the sometimes imperceptible line that separates stardom from being a champion.

It may sound like semantics, but it's not. Yzerman is the example of the sacrifices it takes for the two to co-exist. And he illustrates why it happens so rarely in sports.

Because right from the beginning, back in June 1983 when the Red Wings selected Yzerman with the fourth overall pick in the entry draft, on through the next 23 years ending Monday, Steve Yzerman was a star.

He was a star in that first season when, at 18, he registered 87 points and was named to the all-rookie team. He was a star three years later when he was named Detroit's captain. Maybe he was captain material even then or maybe just the best possibility on a team known, with good reason, as The Dead Things, a team that had missed the playoffs in 12 of the 13 seasons before Yzerman was drafted.

Regardless, fans warmed to the soft-spoken Yzerman because he was something to warm to in an otherwise frigid hockey landscape.

And if none of the rest had happened -- the three Stanley Cups, the gold medal, the playing in spite of what must have been impossible pain for much of the last three or four years -- Yzerman would have turned out to be a pretty darned good player and pretty much adored in a town that loves its sports heroes to be hard-working and down to earth.

First, the Wings got good and they got good in large part because of Yzerman's play. In the 1994-95 season, Detroit went to the finals, but was swept by a very tough, very young New Jersey team. They followed that with a 131-point performance in 1995-96 only to be outworked by Marc Crawford's Colorado Avalanche in the Western Conference finals.

Coach Scotty Bowman told ownership, management, his players, anyone who would listen, that they weren't going to win unless they played a more complete game, trading in some flash and dash for some grit and two-way hockey.

But here's the rub. The Wings won the Stanley Cup in the spring of 1997. More than a million people crowded into downtown Detroit for the Stanley Cup parade. They'd have lined up thousands-deep to play craps with their captain.

The next year, Yzerman had only 69 points, but the Wings won the Cup again and Yzerman was named playoff MVP after leading the postseason in assists (18) and points (24).

In the space of a couple of seasons, Yzerman transformed himself into a complete hockey player. And in that time, he remade the franchise because winning is everything, losing is nothing. Yzerman, perhaps better than anyone on the NHL, knows that, and that knowledge is a big part of why it's time to move on. 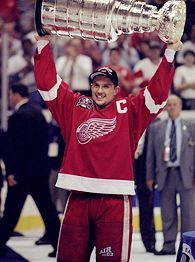 Others have done it.

Dave Andreychuk became a wonderful role model in Tampa Bay, committing to coach John Tortorella's style and becoming a masterful penalty killer and power-play specialist. But, really, what else was Andreychuk going to do? He couldn't skate all that well and his days as a sniper were long past when he embraced the Tampa way and helped lead the team to the 2004 Stanley Cup. And by the middle of last season, Andreychuk was out of gas, the game passing him by as though he was a stone in a stream.

Speedy, skilled, marketable, Yzerman could have said, "Block shots? Are you crazy? Take fewer chances? Do you know what my agent will say?" He could have said that. He could have signed somewhere else along the way (remember the rumors Yzerman was going to be traded to Ottawa?).

But longtime Wings front-office guru, Jimmy Devellano, the man who drafted Yzerman, didn't pull the trigger and remains as much a hero in this story as Yzerman.

Devellano, along with GM Ken Holland and owner Mike Ilitch, were at the table Monday when Yzerman made formal what had been anticipated since the Wings were eliminated by the Edmonton Oilers on May 1.

"We didn't quite get everything, but we got a lot of it," Yzerman said of goals he and Devellano talked about 23 years ago.

In the media, we often like to imbue players with the qualities of their cities, saying they're a perfect fit.

In a blue-collar, union town, Yzerman really was the lunch pail superstar.

"I've been a hockey player since the age of five," he said. "I played hockey all winter and thought about hockey all summer."

He didn't particularly like dealing with the media. It was his job. And as captain, he did it, but often grudgingly and sometimes not at all. But you know what? That's small potatoes to what he did, what he meant in the dressing room, playing through pain at crucial points of the season, delivering key goals or defensive plays when it mattered most.

GMs across the NHL use Yzerman as an example when they talk to their young players about the price that has to be paid, not to be a star, but to be a winner.

Now, with the Wings at a crossroads in terms of their future, Yzerman has once again made the selfless choice. Like taking less money to play last season, Yzerman reinforced Monday that it will always be more about the team than the individual.

Because, just as it was when he arrived, this is a Wings team in a state of flux.

They are far enough from their last championship, in 2002, that it counts now as history as opposed to dynastic. Twice in the last three playoff years, the team has been upset in the first round (Anaheim in 2003, Edmonton in 2006), and in the second round (Calgary in 2005). The Red Wings are like a snake needing to shed its skin to grow. Yzerman's moving on, likely to the Wings' front office, will be a big step in that direction, symbolically if not practically.

The fact Chris Chelios continues, inexplicably, to hang around like a bad virus at age 44 stunts the process, but with Yzerman gracefully exiting, the door now opens for young players to emerge and shoulder a more significant leadership role, whether it's established veterans such as Norris Trophy winner Nicklas Lidstrom or Kris Draper or youngsters Henrik Zetterberg, Pavel Datsyuk and Niklas Kronwall.

In Carolina this season, Rod Brind'Amour emerged from the large shadow cast by former Canes captain Ron Francis and blossomed as a player and leader.

The potential is there in Detroit for a similar renaissance.

As for Yzerman, the calm with which he delivered the news seemed to suggest there really was no other option.

"I feel really good about this, actually," he said. "This was the right decision for me at this time and I really don't have any doubts about that."