Hockey fans don't get much down time. Less than a month ago, we were still wondering who was going to win the Stanley Cup. Since then, we've seen the Hurricanes hoist Lord Stanley. We've also had the awards ceremony and the draft. We've watched some of the biggest stars change addresses through trades or free agency. 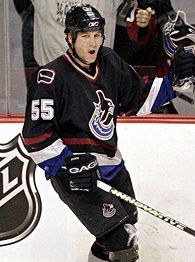 I know fans really love to see the new schedule. They want to see who their team will face to open the new season. Sometimes, it's no real surprise. For example, this season, the rival Senators and Leafs open Oct. 4 in Toronto, but I don't think Islanders or Coyotes fans figured they'd play each other. That desert matchup features an interesting coaching battle: Wayne Gretzky vs. Ted Nolan. Interestingly, in his last junior game, Nolan went head-to-head with another legend, Patrick Roy.

Unlike last season, when the league came back from the lockout with a 15-game opening night, there will be just three games on the Oct. 4 debut.

Hard-core fans also will go through the new schedule game by game, looking for possible road trips. Because of my local geography, I still look to find situations where I can see two games in the same day. My first chance for such a doubleheader comes Dec. 16 -- the Wings skate against the Devils in Jersey in the afternoon, followed by a Thrashers-Isles nightcap on Long Island.

If you like the All-Star weekend festivities, get ready for a change. This season, the All-Star Game will be played on a Wednesday night (Jan. 24) in Dallas. The YoungStars Game and SuperSkills Competition will take place Tuesday night. It's the first All-Star Game since 2004. Last season, the league shelved the game due to its participation in the Winter Olympics. The clubs will begin the All-Star break on Jan. 21 and resume play Jan. 26.

It's not easy to choose a group of must-see games from a 1,230-game schedule, but I'll give it a try. Remember, it's my list.

Oct. 4 -- Buffalo at Carolina
The Hurricanes raise their Stanley Cup banner to the roof of the RBC Center, and they do it in front of the Sabres, who nearly knocked them off in Game 7 of the Eastern Conference finals. Isn't it a little cruel to send the Sabres to Raleigh, N.C., for such an occasion? I get the sense the good folks in Carolina aren't too concerned about the Sabres' feelings.

Oct. 12 -- Boston at St. Louis
The Dave Checketts-John Davidson era opens in St. Louis. They'd love to get off on the right skate in their home opener. New Blues Jay McKee, Bill Guerin and Dan Hinote make their regular-season debuts. This makes my list because I still think St. Louis is a really good hockey town. It would be great to see J.D. put the Blues back on the map.

Nov. 2 -- New York Rangers at San Jose
After a spring of arguing with readers about the Jaromir Jagr-Joe Thornton Hart Trophy battle, we get to see the two players go head-to-head. I'll still take Jagr.

Nov. 28 -- Anaheim at Edmonton
Chris Pronger returns to Edmonton for the first time since his surprising trade request. Do you think he's going to get booed? Oh, yeah. And I think it's going to be loud -- really loud. If you miss it the first time, Pronger and his new team return to Edmonton on Jan. 28.

Dec. 6 -- Carolina at Edmonton
Well, we're right back at Rexall Place for a Cup finals rematch between the Hurricanes and Oilers. Edmonton natives Cam Ward and Ray Whitney can show off their new Stanley Cup rings.

Dec. 11 -- Pittsburgh at Washington
The Sidney Crosby vs. Alexander Ovechkin matchup will be a staple on my list well into the next decade. This is the first of four meetings between the two young stars. Ovechkin's pal, Penguins prospect Evgeni Malkin, might be there to help out Sid the Kid.

Dec. 19 -- Boston at Ottawa
Zdeno Chara makes his first appearance in Ottawa since signing a big-money, free-agent deal with the Bruins. The Big Z probably won't get a hero's welcome.

Jan. 7 -- Florida at Vancouver
Do Canucks fans really love or hate Todd Bertuzzi? We should get an answer when he returns with the Panthers. On the flip side, the Panthers will find out what it's like to try to score on former goalie Roberto Luongo in a real game.

Jan. 13 -- Hockey Day in Canada
A tripleheader for Canadian hockey fans, and for those of us in the United States who have the Center Ice package. The day opens with the Canadiens at Senators (2 p.m. ET), followed by the Canucks at Leafs (7 p.m.) and the Oilers at Flames (10 p.m.). Get a Blue and kick back.

April 8 -- Vancouver at Phoenix
This is the final game on the regular-season schedule. It will be an important battle for a playoff spot or a meaningless tilt. Either way, new Coyote Ed Jovanovski gets to see old friends with the real season just a few days away.