Mike Kitchen must have seen it coming.

First, his Blues were losing. Second, the team had been having trouble at the box office. It's funny how bad teams usually have that problem. Those two factors alone are usually more than enough to kill a coach. 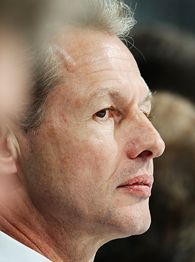 But, in this case, there was another dynamic at work. In his own division, the Central Division, the Blue Jackets and Blackhawks made coaching changes after bad starts, and lo and behold, they responded with some wins. Team execs, especially execs of struggling teams, notice that kind of stuff. They start thinking, "Maybe we should do that." And, if the team loses enough games, those execs eventually pull the trigger. After all, it's not their fault, right?

So, in his final days as Blues coach, Mike Kitchen knew every Blue Jackets and Blackhawks win not only put his team farther behind in the division, but those wins also pushed him closer to the firing line. On Monday, the ax finally fell.

Personally, I have no idea if Mike Kitchen can be a good NHL head coach. Last season, he had nothing to work with. Ownership gutted the team prior to selling it. To his credit, Kitchen got something out of nothing, and, for a short stretch in January, the Blues were a competitive team. Then, injuries crippled an already wafer-thin roster.

This season, Kitchen again did not have much to work with. The new ownership group made a splash by signing a handful of veteran players, most of whom have seen better days. The one solid free-agent signing, free-agent defenseman Jay McKee, has been out with injury for most of the season.

Kitchen didn't have much help in goal, either. Ex-Wings stopper Manny Legace (another free-agent signing) hasn't been very good. Last week, he suffered a concussion and he's out of the lineup. The Blues' other goalie, Curtis Sanford, wasn't much better. He went down with a groin injury in November. There aren't very many coaches (probably none) who can win with subpar goaltending.

Now, Andy Murray, who was fired last spring by the Kings, gets another kick at the Cup. Murray is an excellent coach and a good hire. He's prepared and driven. Maybe he can get this old team going for a little while. It's going to be tough, though. In Columbus, new coach Ken Hitchcock found a short-term (maybe long-term) answer in goalie Fredrik Norrena. In Chicago, new coach Denis Savard has been able to lean on puck-stopping stud Nikolai Khabibulin. 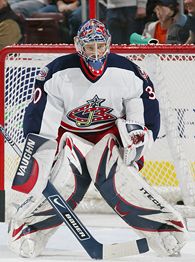 At least for now, Murray will have to make do with minor leaguer Jason Bacashihua and 20-year-old rookie Marek Schwarz in his crease. In Murray's first game behind the Blues' bench Tuesday, Schwarz made his NHL debut in a 3-2 loss to, of all teams, the visiting Blackhawks. The Blues tabbed Schwarz with their first-round pick in 2004. He's a good prospect. Is he ready for prime time? Not behind that team, he isn't.

In time, the Blues have a chance to be better. Eventually, prospects Erik Johnson (University of Minnesota defenseman), T.J. Oshie (University of North Dakota forward) and Schwarz will be ready to contribute. Until then, Murray will try to do a lot with a little.

In case you're wondering about Blue Jackets goalie Fredrik Norrena, I can tell you he's no green kid. Norrena turned 32 on Nov. 29. The Finnish-born stopper spent the past three seasons in the Swedish Elite League. He put up some impressive numbers for Linkoping, posting 14 shutouts over the previous two seasons. Prior to that, he spent several years in the Finnish League.

The Lightning took a flier on him in the seventh round of the 2002 draft, and later traded his rights to the Blue Jackets as part of the Marc Denis-Fredrik Modin deal.

After losing his first four decisions, he's won six straight games, including a pair of shutouts. In 12 games, he has an impressive .928 save percentage and a 1.99 goals-against average. I can't imagine the Lightning, who've been seeking steady goaltending help since the departure of Khabibulin, are too happy about Norrena's sudden emergence. In this case, the Bolts might have traded away a pretty good goalie. I guess we'll have to keep an eye on Norrena.

You've got to give some credit to the Predators, who have managed to stay in first place in the Central despite a plethora of injuries to key players. Goalie Tomas Vokoun has been out since Nov. 23 with a torn ligament in his left thumb and backup stopper Chris Mason has done a fine job in Vokoun's absence. Mason likely will have to shoulder the load until Vokoun's expected return around Jan. 1.

Barry Trotz's team also has been without top center Jason Arnott, who has missed a couple of weeks with a knee injury. He could return to action later in the week. Steve Sullivan and David Legwand have also spent time in the club's sick bay. Still, the Preds keep rolling.

They've certainly been helped by rookie winger Alexander Radulov. The 20-year-old Russian has nine goals in 17 games. When (and if) the club gets back to full strength, GM David Poile will have to decide whether or not to keep Radulov on the roster or send him back to the club's AHL affiliate in Milwaukee. At this point, I'd say that Radulov has earned a spot in Nashville. Of course, the way things have gone for the Preds with injuries, Poile might never have to make that decision.

What would happen if the All-Star write-in campaign for Canucks defender Rory Fitzpatrick were to succeed? Would Fitzpatrick accept the invitation to the game? Would the league somehow try to intervene?

In the most recent vote totals, Fitzpatrick had a very healthy 269,048. He stood in sixth place, roughly 102,000 votes behind second-place Nicklas Lidstrom.

In any event, the Fitzpatrick supporters have definitely gotten the word out.

E.J. Hradek covers hockey for ESPN The Magazine. E-mail him at ej.hradek@espnmag.com. Also, click here to send E.J. a question for possible use on ESPNEWS.