ATLANTA -- Whatever happens now, whether the Atlanta Thrashers flame out in the first round of the playoffs, make a run for the roses or, heck, miss the playoffs altogether, GM Don Waddell has boldly emerged from his own shadow to prove he can play with the big boys. 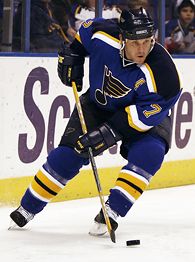 Teams make deadline deals for a variety of reasons.

Sometimes, they are necessitated by injury (see the Carolina Hurricanes), or by the firm belief they are "that" close to winning a Stanley Cup (see the Nashville Predators), or by something more closely akin to panic.

The Atlanta Thrashers qualify on all fronts.

There is no guarantee bringing in two veteran players, both of whom have some baggage, means the team will respond. But one thing seemed patently clear before the deals were made -- something had to be done or the Thrashers were about to fall off the playoff map. Waddell has faced these kinds of situations before and either refused to or been unable to make a move. But after dropping a crucial 4-1 loss to division rival Carolina at home Saturday night, Waddell stepped up and made a move that will in all likelihood be seen as a turning point in the franchise one way or the other.

The only GM the Thrashers have ever known admitted he has been conservative in the past with draft picks and prospects, but now he believes he's got enough assets to make this kind of move. "The future for us is now," Waddell said.

Saturday's loss left the Thrashers with just four regulation wins in 25 games dating back to Dec. 30. Their power play is mired at 22nd in the NHL despite the presence of elite players like Ilya Kovalchuk, Marian Hossa and Slava Kozlov. Their penalty-killing unit has seen a recent upturn, moving from dead last in the NHL into a tie at 29th. In other words, it's been junk. Over the course of this slide, the Thrashers have seen a comfortable division lead evaporate into a life-and-death struggle to make the playoffs.

After Saturday's loss, the Thrashers woke up in sixth place in the East with 72 points, a point ahead of Carolina and two points ahead of the New York Islanders (who have two games in hand). Outside the playoff bubble, the ninth-place Montreal Canadiens are two points back of Atlanta, while the 10th-place Toronto Maple Leafs are just three points back with two games in hand.

In short, a team that needed dramatic change to lift itself out of its lethargy, a team that is absolutely desperate to qualify for its playoff berth, got just that.

Yes, you can argue that bringing in a couple of players, one of whom -- Zhitnik -- is on his third team this season, doesn't guarantee a fix. The changes don't guarantee a long playoff run or an end to premature hair loss or an end to the torturous Anna Nicole Smith coverage on television.

But what is guaranteed is this: Inside the Thrashers' dressing room, players will look at one another and understand that management both understands and believes. Management understood there were problems and believed enough to trade a handful of picks, forward Glen Metropolit and the 2003 eighth overall pick in 2003 in Coburn to get better.

Players will know it inside the dressing room and they will know it in the dressing rooms of the other teams in the mix, teams that might not have the wherewithal or the gumption to make similar moves. And every time the Thrashers beat a team or pick up a point or two from an opponent that didn't make a move, the Thrashers' move will be brought home in spades, on both sides of the equation.

Tkachuk, a bruising, physical force up front who has six points (three goals, three assists) in his past six games, can play some at center, where the Thrashers have been thin all season but are especially so now that Steve Rucchin is out with a foot injury.

The book on Tkachuk, who led the Blues with eight power-play goals, is that when he's going, he's one of the top power forwards in the game, a player that's difficult to knock off the puck. He's not afraid to go in the high-traffic areas in front of the net or the corners and can intimidate opponents. The book also suggests the 34-year-old (he'll be 35 in late March) can be surly and not necessarily the most selfless player in the world.

Over his career, Tkachuk has never played more than 15 games in any one playoff year and is a minus-16 in 81 postseason contests. But you can bet Waddell, who named Tkachuk to the U.S. Olympic team last year, had a long chat with Atlanta captain Scott Mellanby (he and Tkachuk played together in St. Louis) about the big man's impact in the dressing room and got the green light from that perspective.

And remember, coach Bob Hartley is familiar with Tkachuk from his days in Colorado; the Avs and the Detroit Red Wings were constantly thwarting the Blues in the postseason.

"It was a no-brainer," Tkachuk told reporters Sunday about the opportunity to come and play alongside players like Hossa and Kovalchuk. "I'm looking forward to it. It's a great thing."

Zhitnik, a puck-moving defenseman with a physical edge, chased free-agent money, leaving Buffalo for Long Island after the lockout. Zhitnik didn't fit into Ted Nolan's picture and rookie GM Garth Snow sent him to Philly for young forward R.J. Umberger. He is minus-29 in 94 postseason games. Zhitnik, who was minus-16 in 31 games for the Flyers after being plus-13 in 30 games on Long Island, now will be asked to eat up minutes while contributing on special teams.

Whatever shortcomings the pair might have, Tkachuk was the most sought-after player on the trade market following Nashville's acquisition of Peter Forsberg a week ago.

Was the price too much?

The answer will unfold over the coming weeks -- maybe months if the Flyers can somehow coax Coburn into learning how to skate and hit. But the immediate answer is a resounding "no" because hope and belief, in general, have no price tag, and that's what Waddell bought this weekend.

Now, all Tkachuk and Zhitnik have to do is strengthen that belief with some wins.